After visiting Truganina Swamp yesterday, I decided to visit Altona Coastal Park and walk through Jawbone Reserve to Williamstown station. I wanted to learn as much as I could about the area even if it didn’t yield much in terms of birds. I had initially planned to visit Cherry Lake as well but thought that may have been too much for me. Good call, past Jade!

I got off at the Seaholme station and it was a short walk to the coastal park. 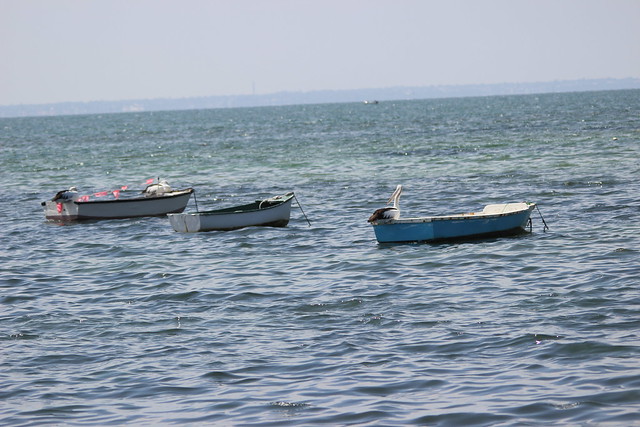 I walked past a reserve. Their was a pier nearby, which was fantastic for the normal birds. Lots of pelicans and pacific gulls. They were flying around a lot so it was great for photography. I loved getting the above photo with three pelicans sitting on boats. 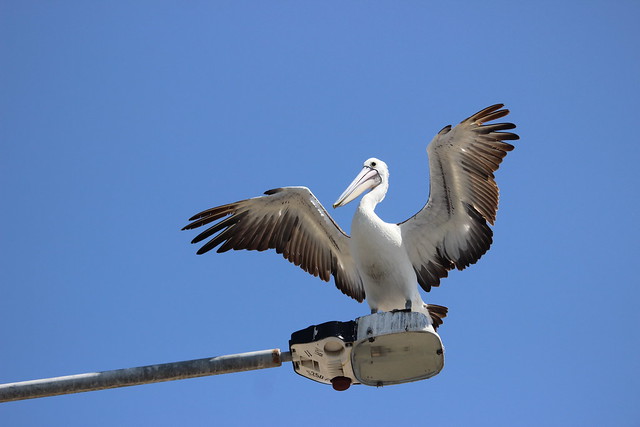 Primarily got this one to show Glenn. 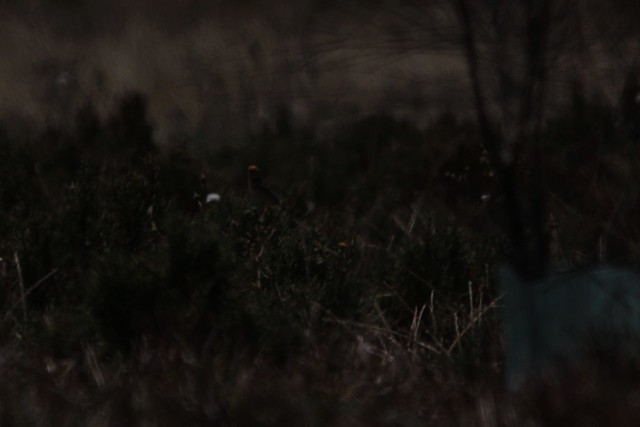 It was a bit frustrating there. I could hear a lot of birdlife but not necessarily see much. Of course, a lot of the birds showed their heads while I was sitting down and talking on the phone to Glenn! Alas, I couldn’t multi-task. My feet were hurting a bit at this point so I was hoping to wrap about the trip ASAP. But look! A poorly lit photo of a Golden Headed Cisticola. 🙂 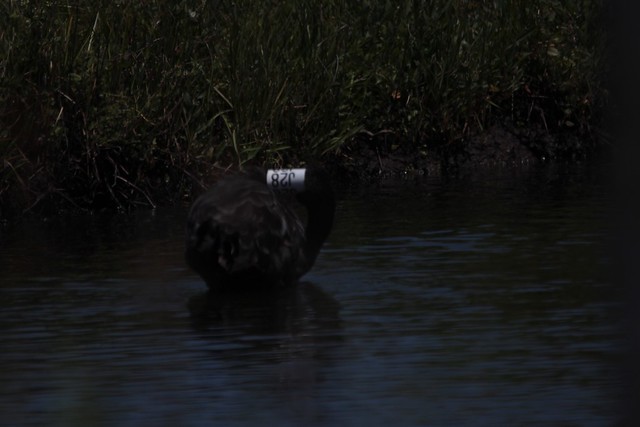 I try to take photos of birds that are tagged so I can contribute to the research projects. I need to make a list of ones I can help with. Also, this area was brilliant for Fairy Wrens. It was a different environment then what I was used to and is definitely an area that requires more patience. Straited Fieldwrens are common here. I probably saw several but they were too quick. I could hear birds everywhere but they were well hidden. 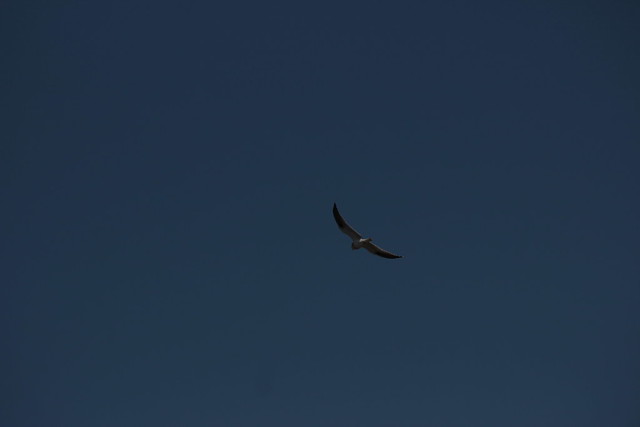 Another black shouldered kite. It was at this point that I changed the camera settings to sports mode. It made the rest of the photos from the day look dark and yucky.

Trying to cross the river 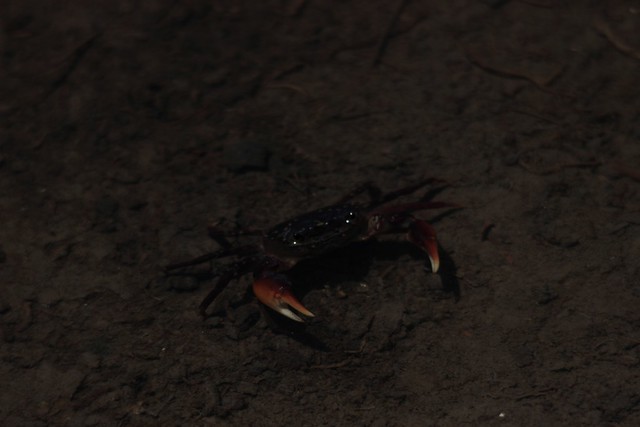 THEN I SAW A RED CAPPED PLOVER! 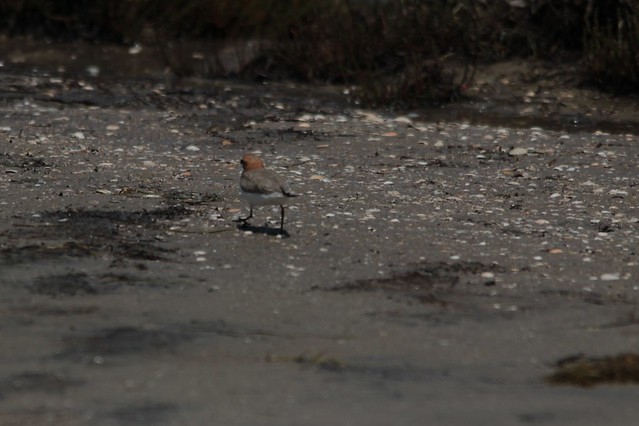 And then I realized there was no way to cross, so tried to cross at the actual creek mouth. It looked deep so I hiked up my dress. I put on foot in the water. The sand enveloped my foot and I fell on my butt, getting saturated up to my waist. The camera didn’t get wet, though.

It was funny – I knew I’d be able to see the funny side later. My feet were still sore and I knew I had to backtrack. It was hot and I was incredibly thirsty. I was starting to feel a bit woozy, even though it wasn’t that hot. I don’t have much tolerance for heat.

I ended up chafing because the bike shorts I was wearing took too long to dry. It took ages to get to Jawbone and it didn’t yield anything out of the ordinary. Until I decided to get a closer look at a ‘rabbit.’

I was walking towards the bird hides when I saw a black shape in bushes on the side of the footpath. I thought “Awesome. Another rabbit to photograph.” I hate rabbits but my nephew enjoys seeing them, so I photograph them where possible.

I leaned closer to get a better look. I swore. It was a quail! It was just as started as I was and ran even deeper into the bush. I didn’t have the chance to take a photograph, so I wasn’t able to identify it.

I asked on a Facebook group I’m a part of and they said that brown quails are very common in the area – it’s a good hotspot for them. But you can’t 100% say it is as you also get painted button quails and stubble quails in the area. I’m loving the various Facebook groups I’m involved in. The people are so helpful, despite my obvious newbie-ness. I’m learning so much more then I was by birding by myself and hoping that google had the answers. Google very rarely does; people don’t seem to share that much birding information via blogs, at least stuff that is good for newbies. 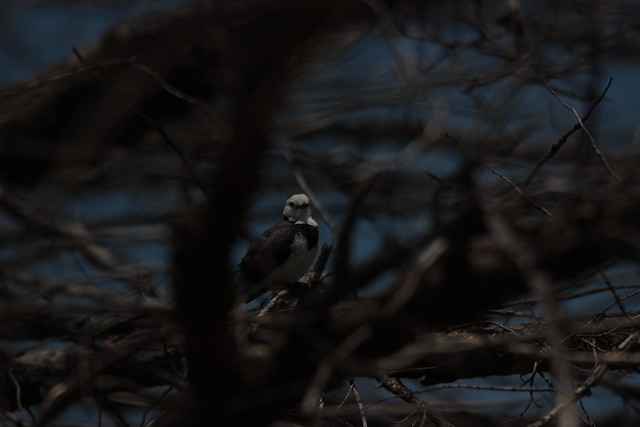 I have a thing for white fronted chats. 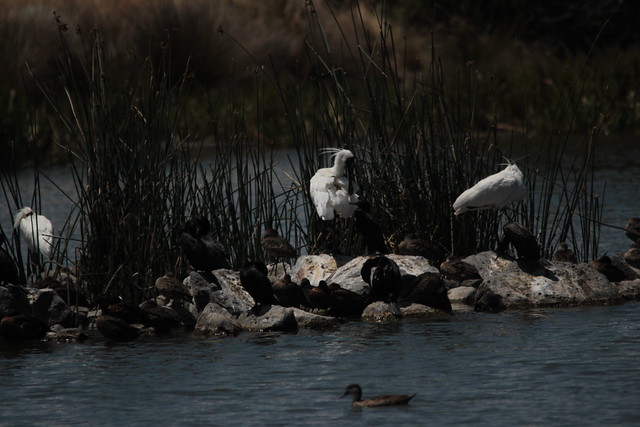 And spoonbills in breeding plumage. Wish I could have gotten better shots. I want to go to Serendip with Glenn before his break finishes. 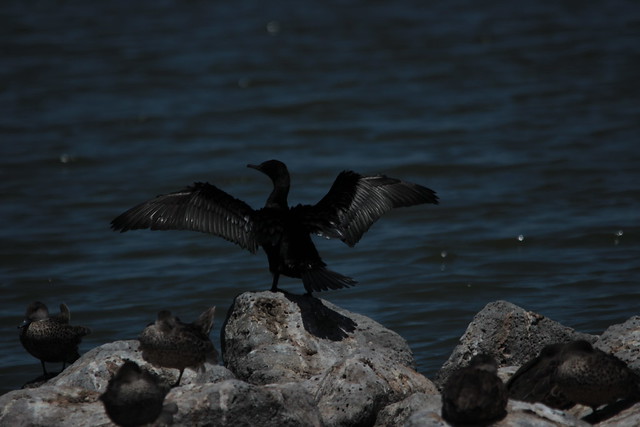 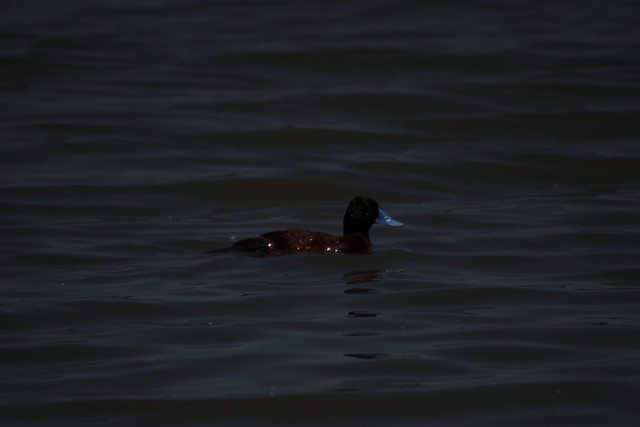 I love blue billed bucks. I’ve seen them before at Jawbone but suspect it was a female. I was shocked at how bright the bill was! It was such an honour to see that close. I really love ducks.

This part of the twitch was a real struggle. I was exhausted, in pain. I found a tap along the path and refilled my water bottle. I sat in the bird hide for about 20 minutes and just drank water, trying to cool down. I did feel better afterwards and didn’t get a migraine from the trip – nor vomit. When you have anxiety and migraines you learn to expect the worse 😛 I think the naprogesic helped. I’ve learned that I need to:

I’m also unfit, I can’t walk 15+ km in a day like I used to. I only walked 6-7 yesterday. I’ve been able to do that before but it’s along the river here and has more shade, and isn’t as hard on my feet. I felt pretty rotten physically today.

I’m also starting to think that Jawbone isn’t really worth the visit any more – I should explore the other areas, now that I know how to get there. Tomorrow we are going to Werribee Zoo. Primarily for Glenn to practice wildlife photography but I’m hoping we’ll see some birds. Has over 130 regular birds sighted there!

I’m loving birding and life at the moment. Sometimes it all falls into place.