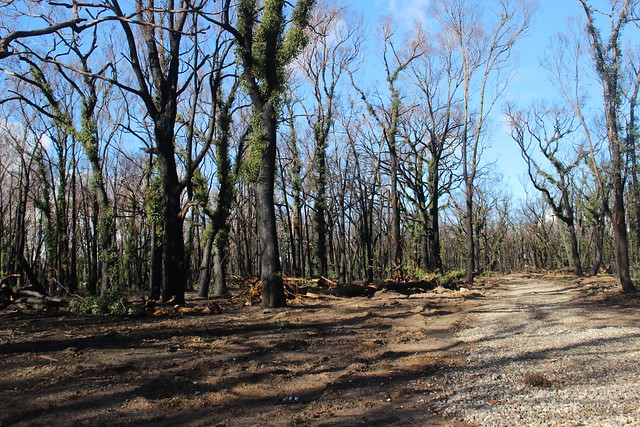 We are at the time of year where the bush block gets really interesting. I noticed more spider webs around so paid particular attention to the leaves on the trees. 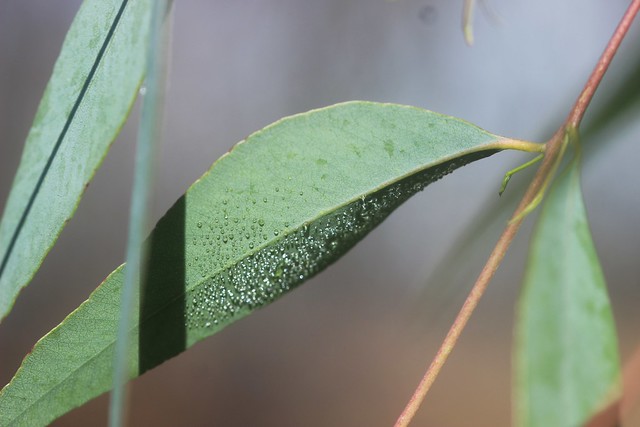 That may have extended to capturing dew on the leaves. Alas, there was no time for creativity. We had to be home in time for mum to cook a roast so only did a quick rush. We were there for nearly 2 hours and still only covered about half of the block, that is how interesting it was. 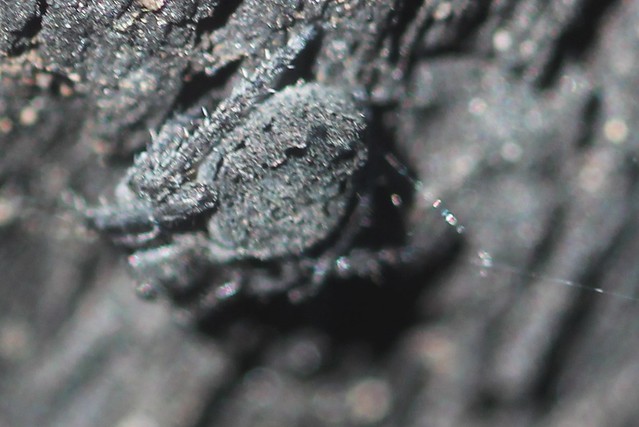 I did see this brilliantly camouflaged spider. I’m realizing that my macro lens has so many limitations. Until I figure out how to use it, I should just go back to an olloclip on an iphone. I’ll be experimenting with that. 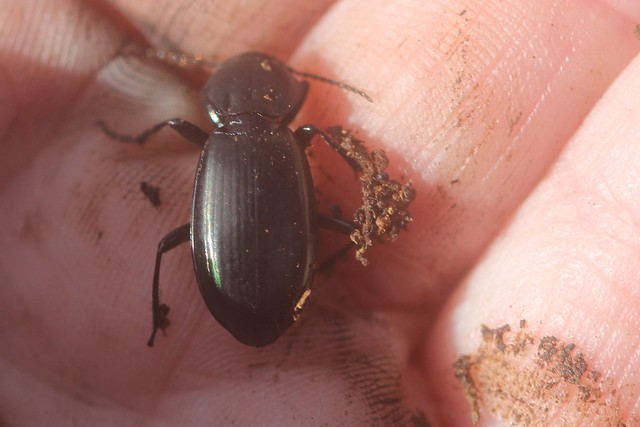 Sethy, of course, started lifting up rocks and managed to find more bugs then I’ve ever seen up there. Ironically, one of my entomology friends on twitter recommended that I start doing that. The main issue on the day was that it was so muddy and, also, Sethy can’t hold things still for long enough. 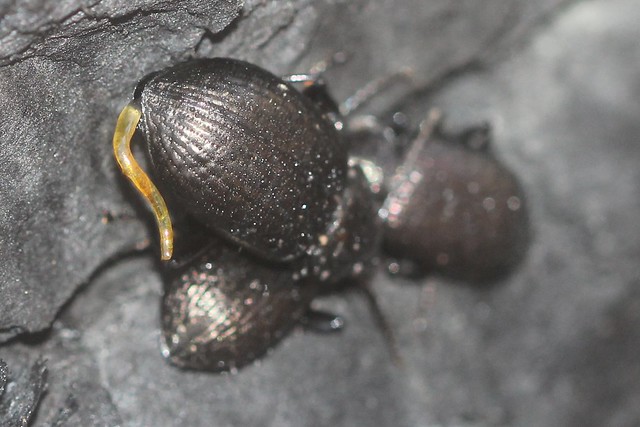 This has been identified as a darkling beetle, which is the common name for bugs in the Tenebrionidae family. Oh – did I mention I got a book on Tenebrionids MASSIVELY DISCOUNTED? (Oh, I did. Well, it’s awesome.)
Apparently the funny tube coming out of its rear is a type of defense. 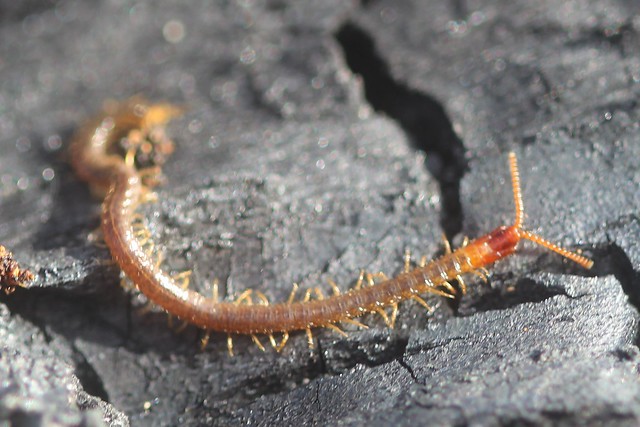 I have no idea what the above centipede is – although I know it is a centipede because it has one body part per segment. 😀 I’m learning stuff. 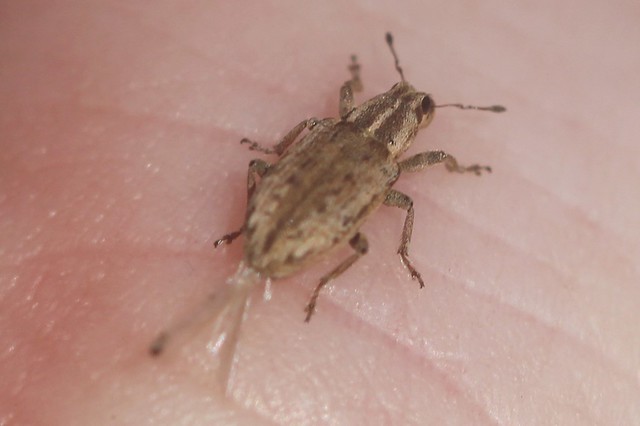 I think the above is some kind of weevil although, as usual, have no idea where to start. It is on Bowerbird. It was so cool, I saw it fly past and was able to find it on the ground! Then Seth picked it up. But I’m getting better.

This was identified as a peziza species but I have no idea how to tell them apart. I couldn’t find anything online. I did find the following, thanks to a free ebook by the Field Naturalists Club of Victoria.

Peziza tenacella is found on charcoal, either after a bush re or on the charcoal ash of an old camp re. The immature cups or discs are violet and become umber as they mature. Care must be taken when identifying this species as there are other purplish Peziza species, such as P. praetervisa and P. pseudoviolacea, which also appear after fire. These species tend to retain the purplish colour more so than P. tenacella. This one of many fungus species that rapidly appear after a bush fire. It seems that post-re fungal growth helps to stabilise and rehabilitate soil, and facilitates plant establishment.

via Part 2: Fungi in Australia

I’m thinking it may be because a lot of it is going brownish really quick. While I don’t know much more about them, I know mum will be appreciative. Also: would 6 months post fire be defined as ‘soon?’ 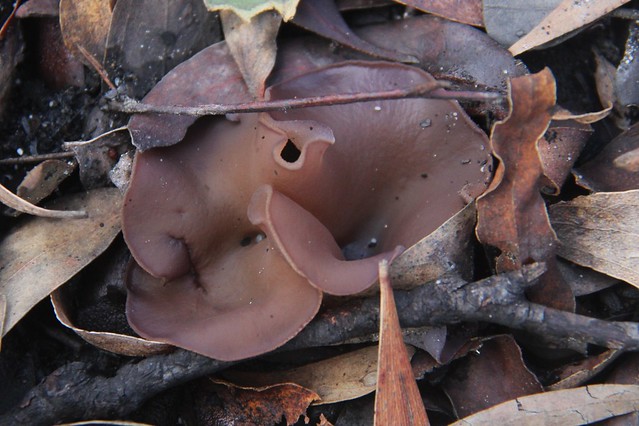 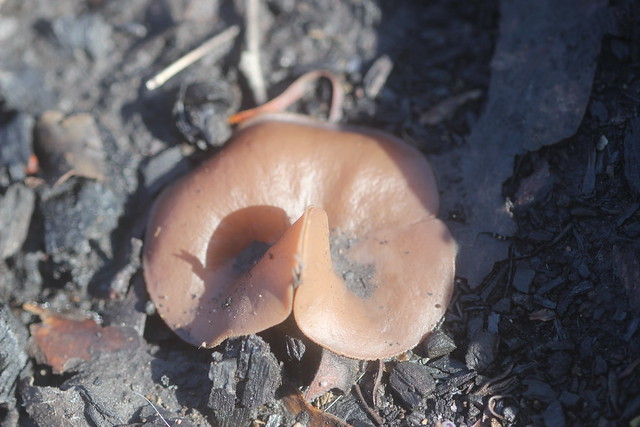 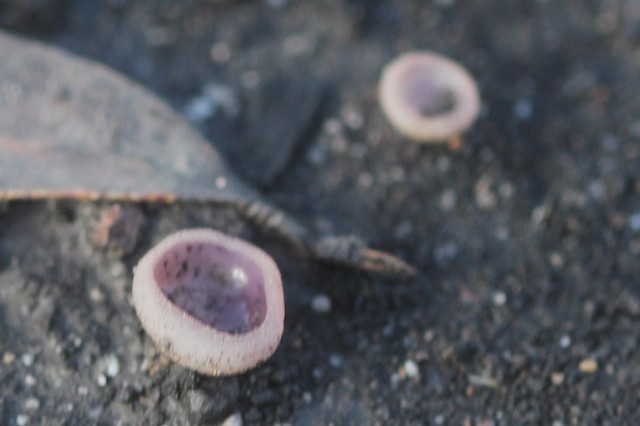 I didn’t focus on getting enough details with these guys as I was starting to notice birds around and suck at multi-tasking. 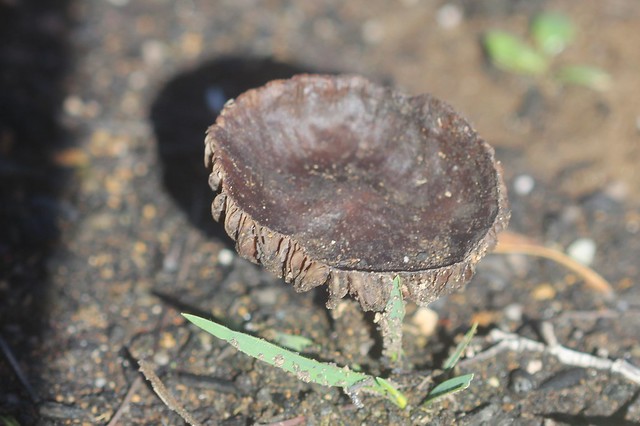 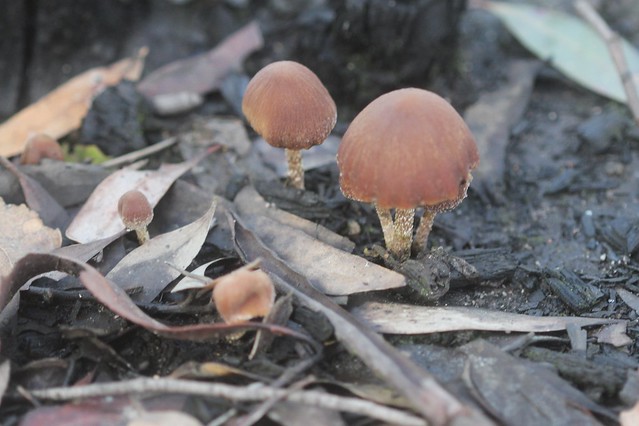 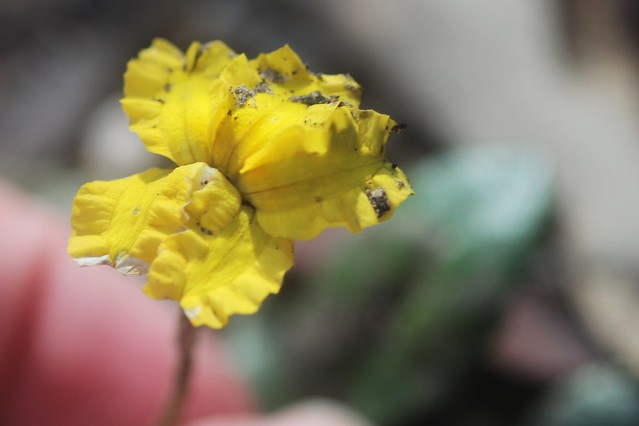 Mum said she saw bush orchids somewhere so we spent a good 20 minutes backtracking and trying to find them. I eventually found them, just before we were about to give up and go home. They didn’t look orchid-y to me but I tried to document them eventually. It was eventually corrected to a goodenia species, a common wildflower around Ballarat.

I feel a bit stupid. Who cares though as I’m learning and loving it 🙂 It also turns out the plant is featured in the logo for the Ballarat Field Naturalists Club. Looking into their website… I actually think the nature there is considerably more interesting then around Geelong. Granted, I can’t drive and am basing this on infrequent visits to the area.

Mum is talking about going up more frequently now to document the fungi. Will make sure I take spare pants so it doesn’t matter if I get them dirty when taking photos 🙂