Yesterday, Mr Sethy and I went to my parents bush block with, well, my parents. I was initially thinking of taking the little dude to Eastern Beach, or even trying to get him down to Point Addis. Then mum said that they were planning to go to the property.

I instantly asked if I could go. I had gone there last year with my family and it had proven itself to be a pretty good place for birding. I wanted to explore it in depth looking for birds with Seth, and also looking for fungi and bones.

Sethy was very excited about adding a couple of lifers to his list, and the property certainly didn’t disappoint. We went to one of the back corners and the birds all showed up.

First, there was this white naped honeyeater. It would be awesome to visit here more frequently and monitor the various types of honeyeaters that call the property home. Alas, I don’t think that is possible. 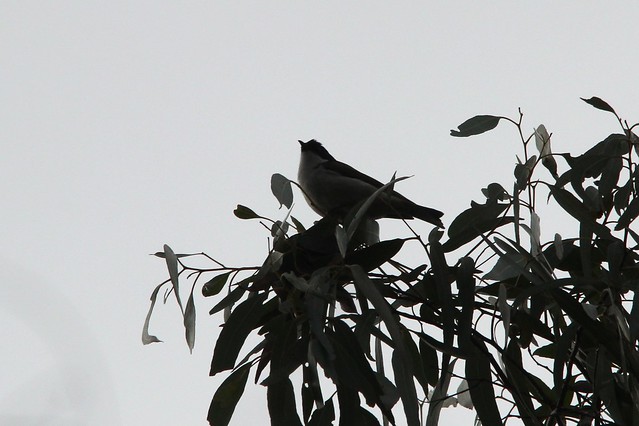 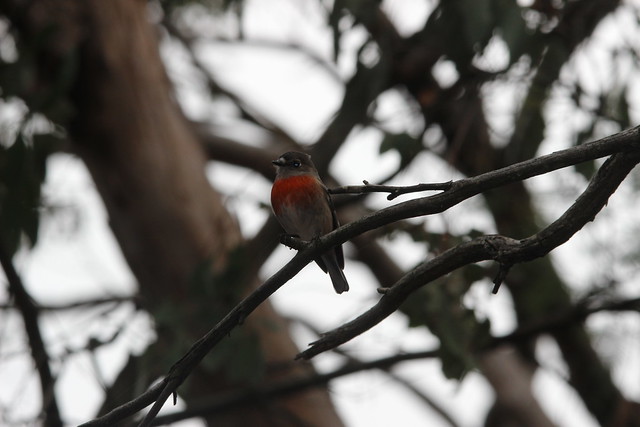 He was pretty stoked to see this scarlet robin though. I’ve learned how to tell the female robins apart – the flame has red that goes all the way up to the chin. Seth was pretty excited to see this. I’ve seen and photographed it several times – and always love it! – but Sethy doesn’t often get to go to as many places as I do. We got extended views of several male and females. 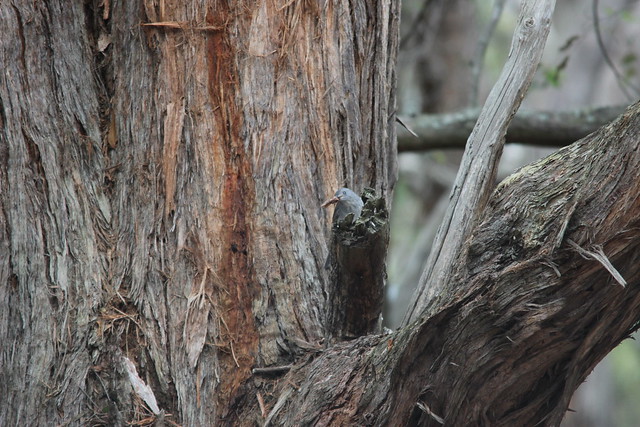 I got a photo of what I’m presuming is a grey strike thrush. The picture turned out blurry, as the bird was moving pretty quickly, but the bird was eating a moth 🙂 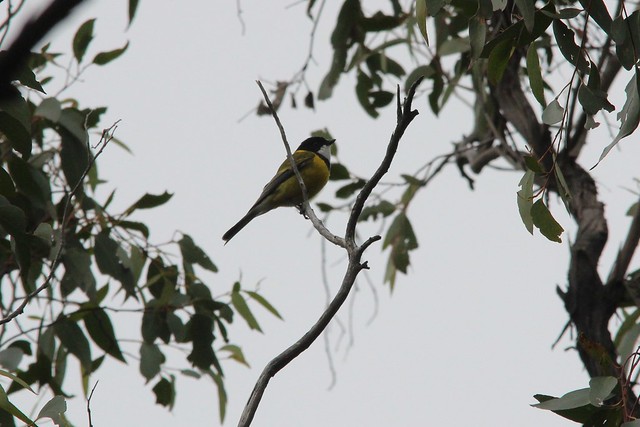 Got a really beautiful, clear photo of a male golden whistler. Seth had seen the female in the boardwalk near balyang, but nothing compares to the bright colours of the male. Methinks I’ve passed on a whistler obsession to the little dude. 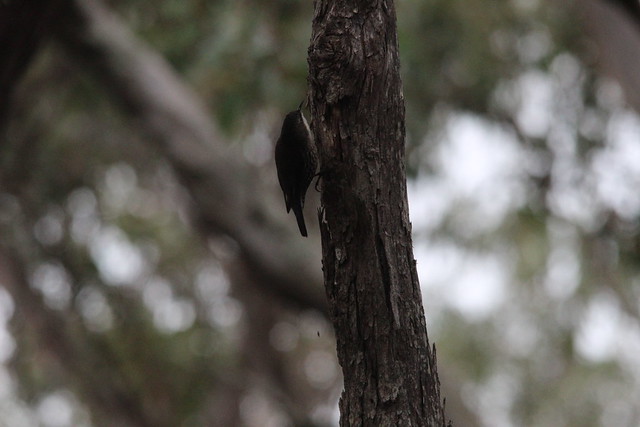 He also saw his first white throated treecreeper! I’ve been seeing this guys a lot lately, but I loved showing Sethy their behaviour. We also got to see the little red dot on their cheek, which I’d only learned about three days prior on my birthday. 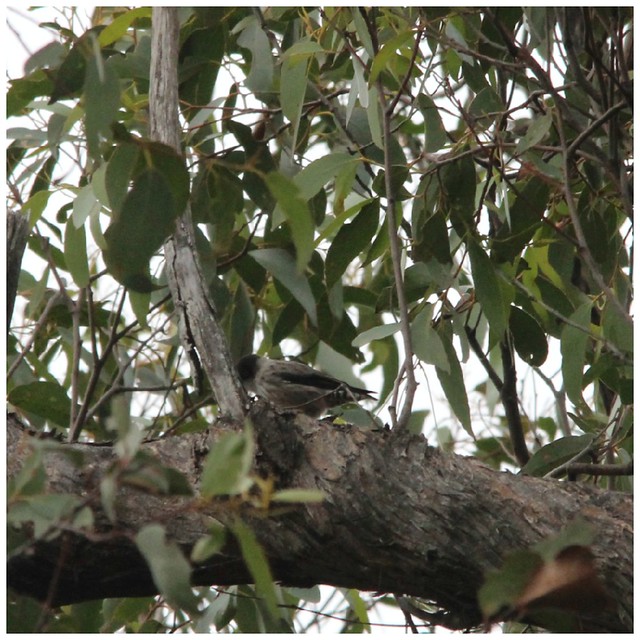 This little guy is a varied sitella. Another lifer for Sethy and only the second time I had seen one! I struggled with the ID initially and had to ask for help. Fortunately the people on the facebook group were super helpful.

I was told to watch out for their distinctive way of feeding, which is apparently by spirally down a tree. They are also meant to hang out in groups, which is curious as I’ve only ever seen the two by themselves. It could just be because I take so long to find and identify the birds. I need to get better at ID’ing them quicker so I can watch for their behaviour.

Not sure I am fond of them yet but hey, I love learning.

The fungi was a definitely highlight, although nothing will ever match that one brilliant year we had their. I have no idea what we found. As such, there will be no commentary ;P 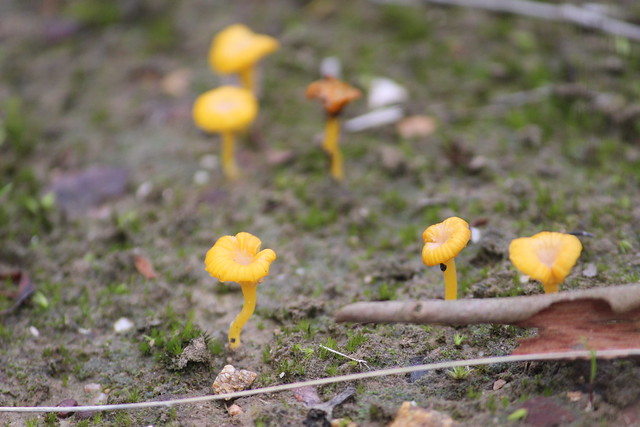 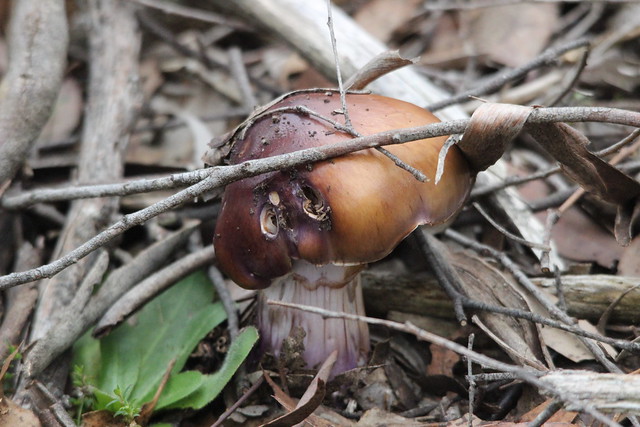 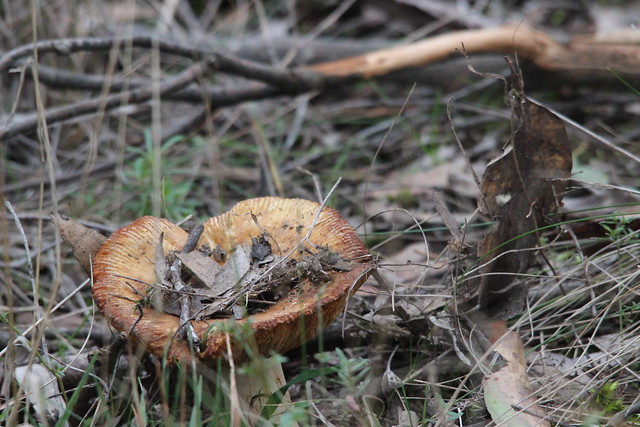 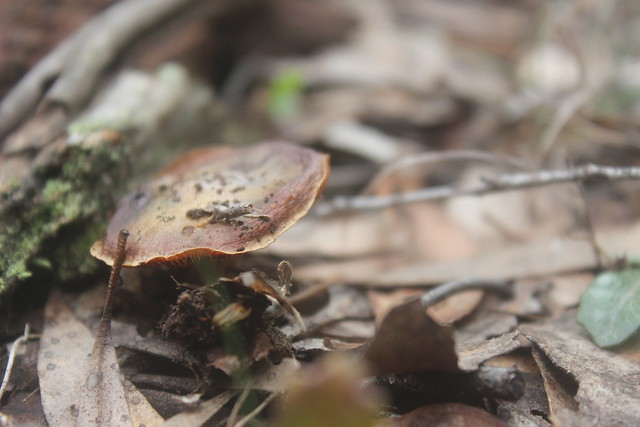 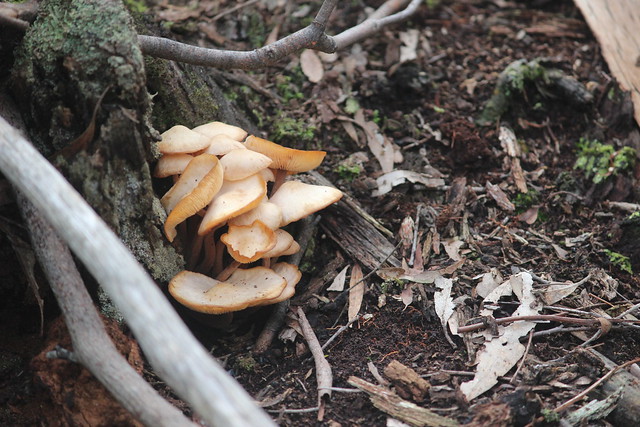 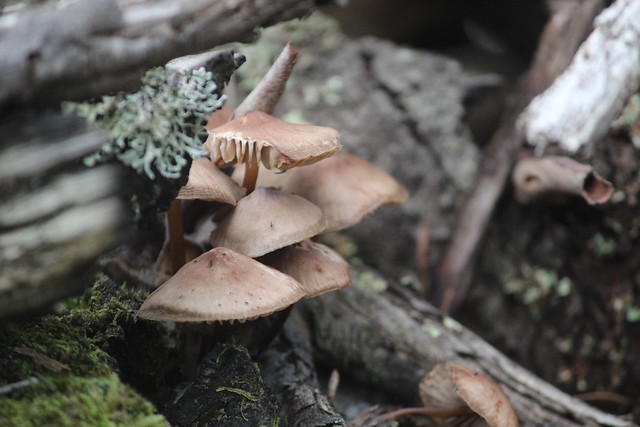 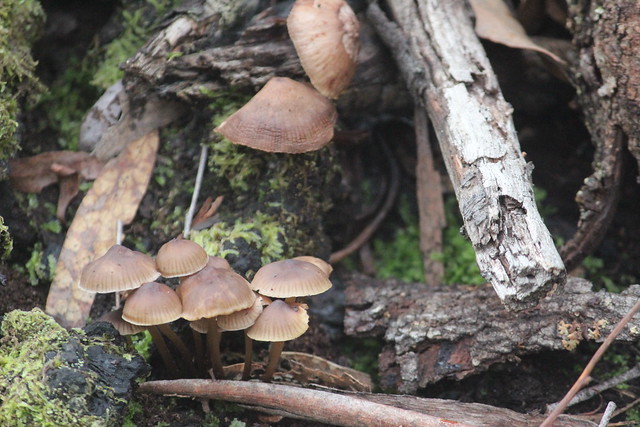 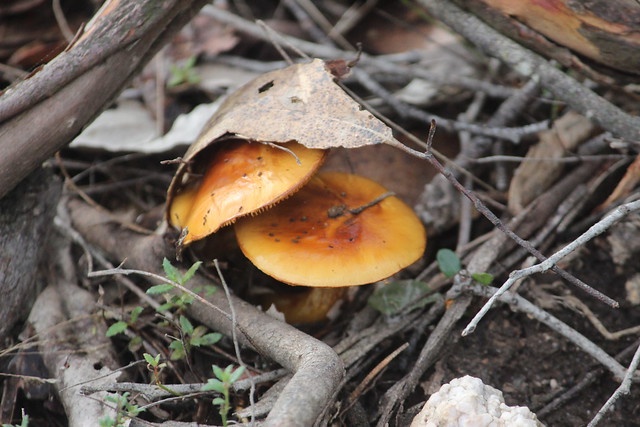 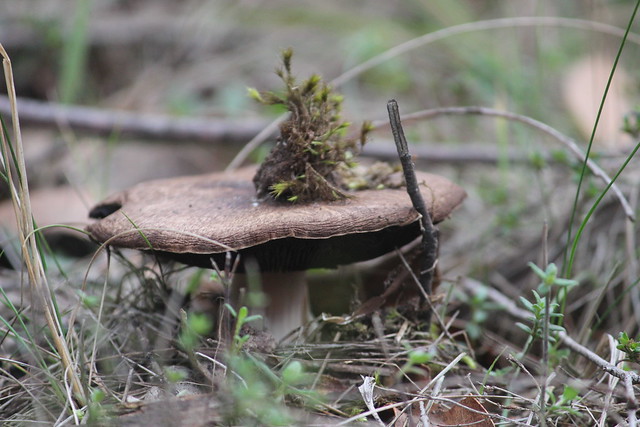 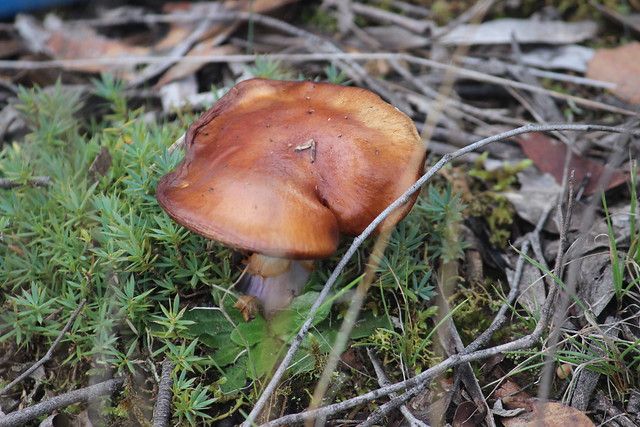 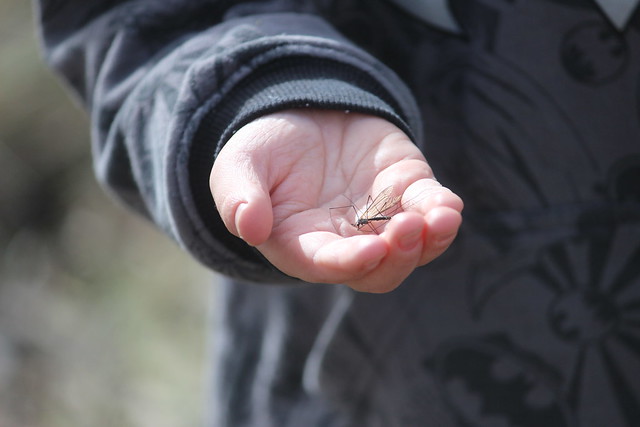 Sethy discovered this large mosquito, which we eventually learned we everywhere. Later, he found one caught in some sundew. 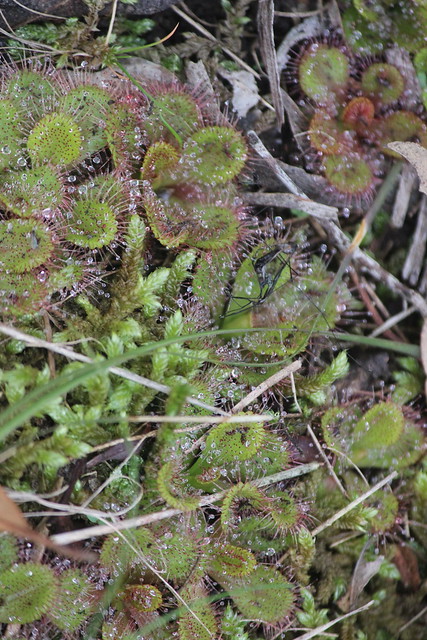 He also discovered what he called a bush cockroach and asked me to get photos of it. Darn his love of science. 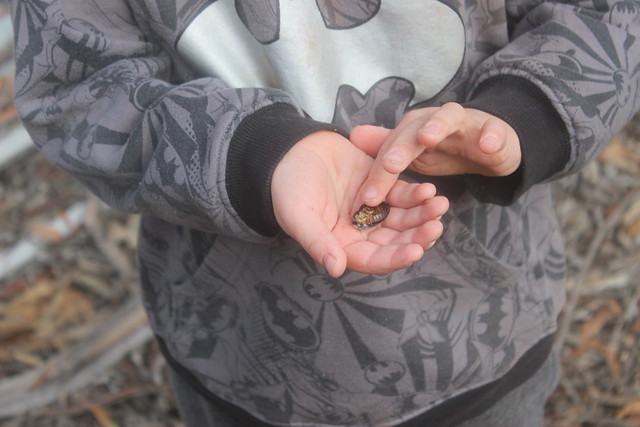 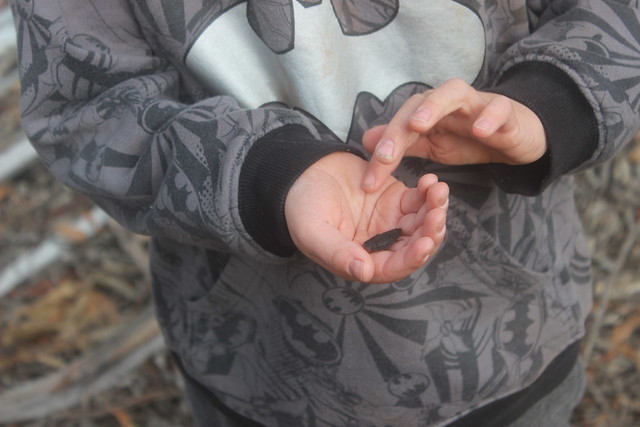 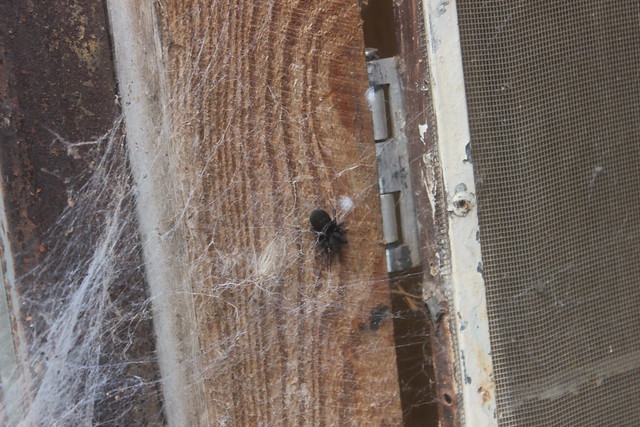 A spider in the door. I hate spiders 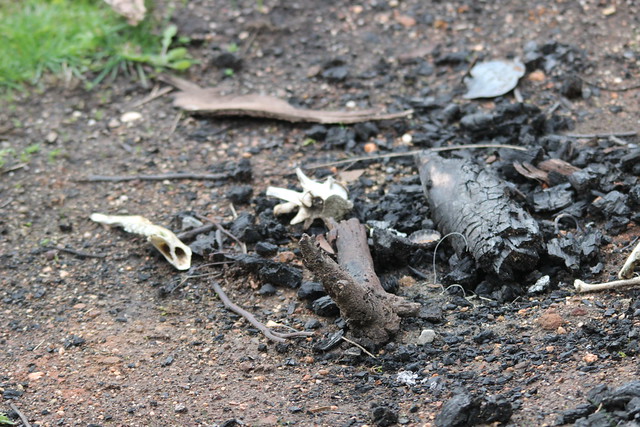 We stopped off at a picnic area near a creek in steigletz while driving back and found these wallaby bones. It was fun trying to figure out what they were from.

We did also find bits of bones, which we decided must have been from the sheep that live in the opposite paddock. I didn’t think mum would approve of any more bones 😉 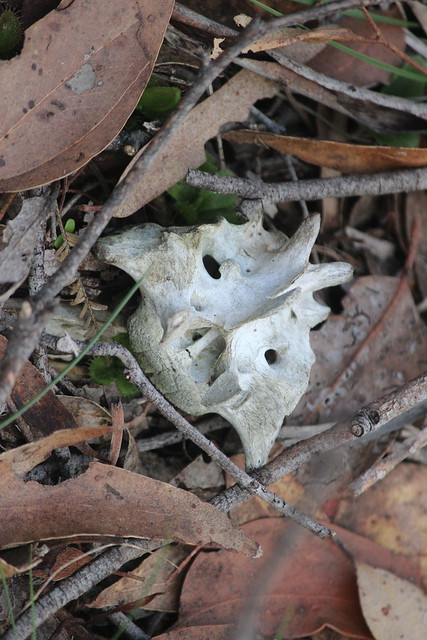 Sethy had fun. He’s becoming quite the nerd that is fascinated by everything. At the start he was awesome too, uncharacteristically quiet. I didn’t get to suss out the whole property, as one of the neighbours was cutting down trees and scaring away the birds.

We did find a complete rabbit skull though. We were able to definitively ID it from the book. Sethy has also watched some of the interviews of Jakes Bones and has decided he wants a similar collection. My work here is done 🙂

My parents own a bushblock about 20 minutes away from Ballarat. It is a place I’ve loved and loathed. I used to hate going there as a kid, preferring the solitude of the family home once all four of my siblings were there. The property could be fun but not when siblings invited all of their irritating friends.

I’m more appreciative of it now, I love the particular type of bush it is. You can get awesome fungi if the winter is cold enough! Last winter, I was craving a trip to the bush. My family were going to the bush block. I asked if I could go with them and do some sneaky birding. 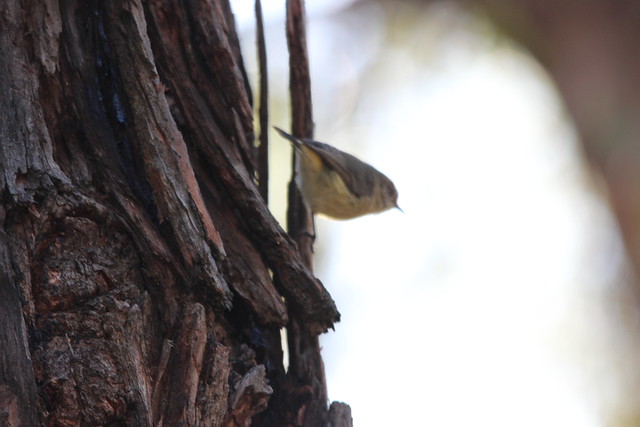 As usual, I struggled to bird because my nephew was there. I swear he knows when I really want to be by myself and chooses that moment to be clingy, ignoring my pleas to be quite. He knows how to be quite but just chooses not to, even when he’s said he wants to go birding.

I walked around and took photos of everything that moved. This is a Buff rumped thornbill. 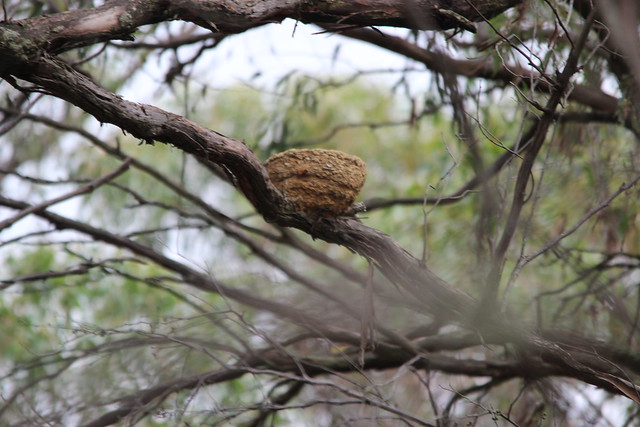 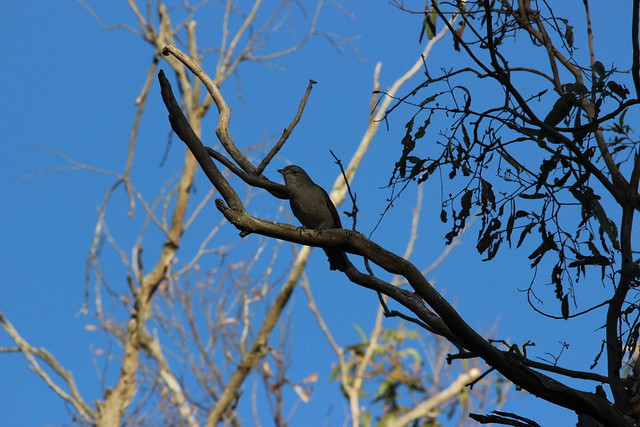 This is an immature grey strike thrush. I’ve recently learned that strike thrushes can have different calls depending on the region. No wonder I got confused at Toolangi! 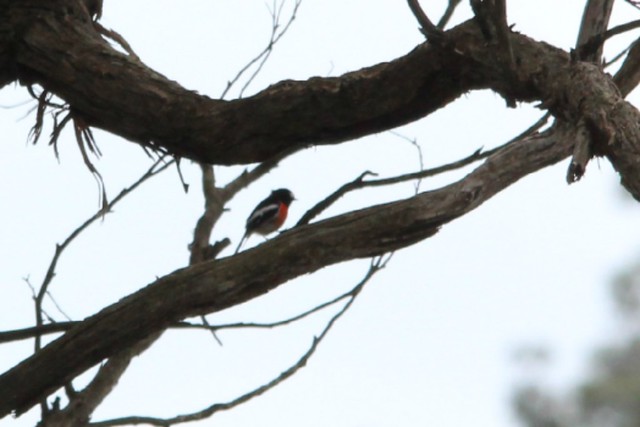 There was a scarlet robin hanging around a huge tree on the neighbouring property. Next winter, I need to return to Ocean Grove Nature Reserve to check out the robins. 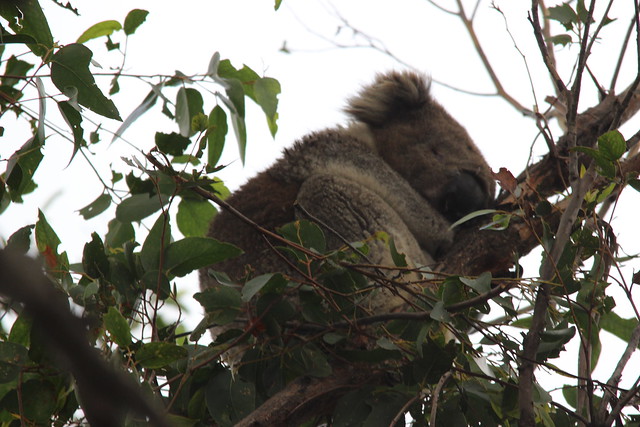 I was walking along the side that borders a neighbours farm when I saw what I thought was a clump of sticks high up in the tree. Initially, I thought it was a nest. Turned out it was a koala! It looks a bit different to other koalas that I’ve seen, like the nose is too big. I ended up getting my family to come and see it. Nice to know that the native animals love our little sanctuary. 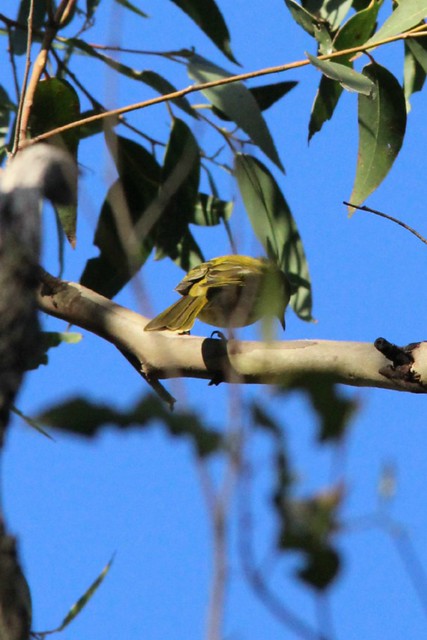 I really want to return to the Ballarat region, and other parts of central Victoria, to bird. I love seeing the difference in various types of bush and forest. This trip was a bit of a bummer but any birding was incidental.