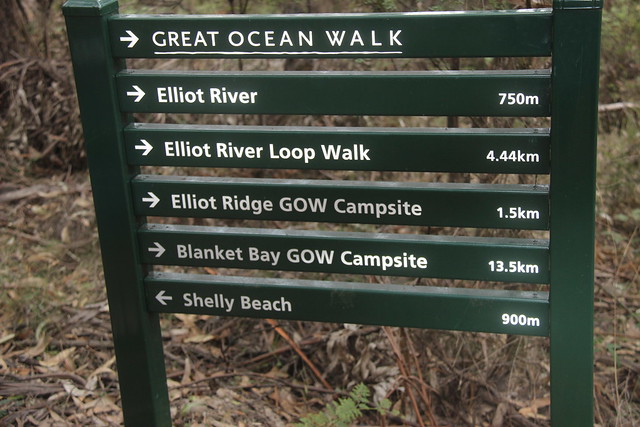 It was the first day of our Apollo Bay trip. Two weeks prior, I had decided I was going to try to knock out part of the Great Ocean Walk. Originally, I was thinking of taking a shuttle and walking the 7km back by myself. Then I thought: why not see if Seth (my 7 year old nephew) wanted to come with me?

He was more then capable of walking 5km+. He loves nature, especially beaches. The Marengo rockpools are a regular haunt of ours. We decided that we would walk the 5km back to Marengo, and then catch a lift back.

Why stop at Marengo?

We visit Apollo Bay quite frequently, as my aunt as a holiday house there. Sethy and I have walked the first km of the Great Ocean walk quite frequently – we’ve done so many walking loops to Barham River. We had seen the trail to Apollo Bay and wasn’t to impressed. It did look possible to walk along the beach to Marengo on low tide, but that may make it more difficult to do the rest of the walk at low tide.

I do recommend exploring the rockpools at Marengo, if you have the time. I also recommend doing a short walk along the Barham river. There are so many little pockets to explore around here; this walk is just a taster. 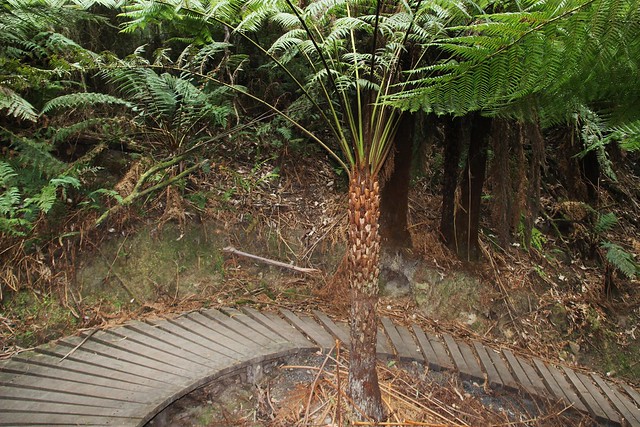 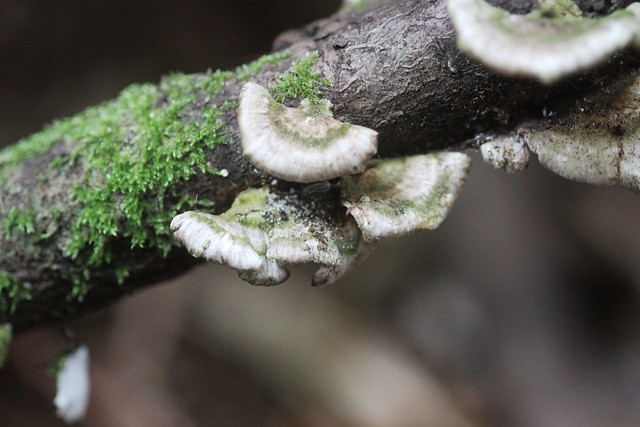 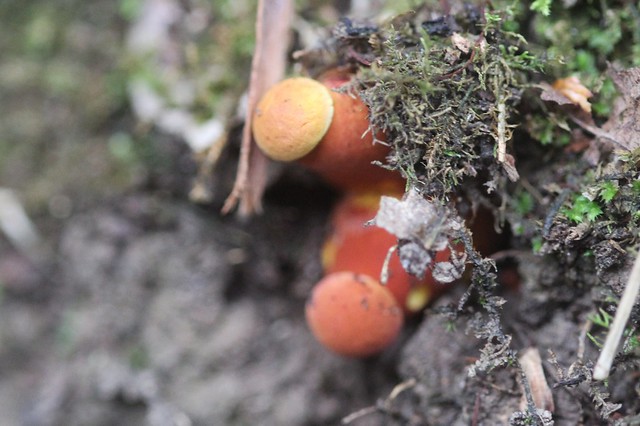 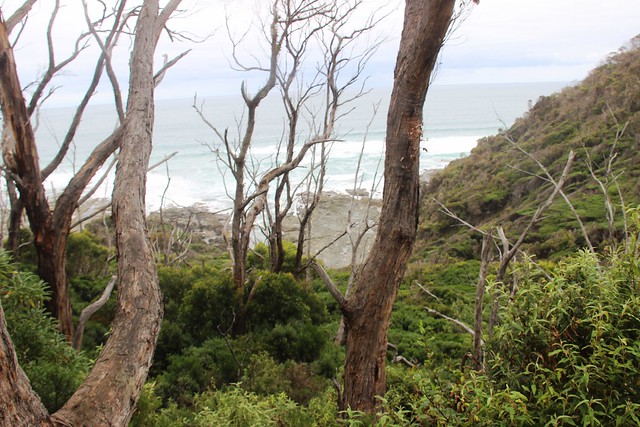 This section was short, but so beautiful. It was completely unexpected to have this rainforest so close to the sea. We took a good hour to walk this as we were stopping and looking at everything. It reminded me of Maits Rest somewhat, only slightly dryer. We did hear a lot of birdlife but didn’t have time to check it out. I’m hoping to return to this area to explore it properly.

Seth did encounter his first leech along this section, which is something to be aware of. Some sections of this were a little bit steep. In the final photo, you can see the view once we started to get close to the beach. It actually reminded me of the manna gums along the road to Cape Otway lighthouse. Alas, I couldn’t get decent views of this once we got to the beach.

This section is only 750, but it got pretty hairy in some places. We had a beautiful paved section down to the beach… 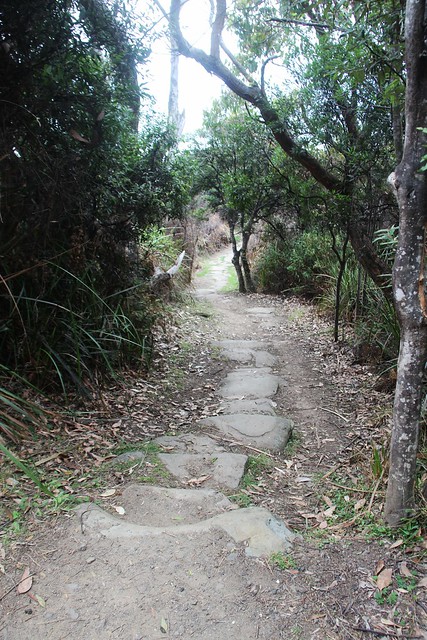 which looked like the picture below, once you got down there. We would have loved to have spent a while down here. It is a beautiful, secret little area. There were cool rockpools here – in an image below you can see one of the many crabs we found.

The Marengo rockpools are starting to get popular so it was lovely to have this secluded little area all to ourselves. 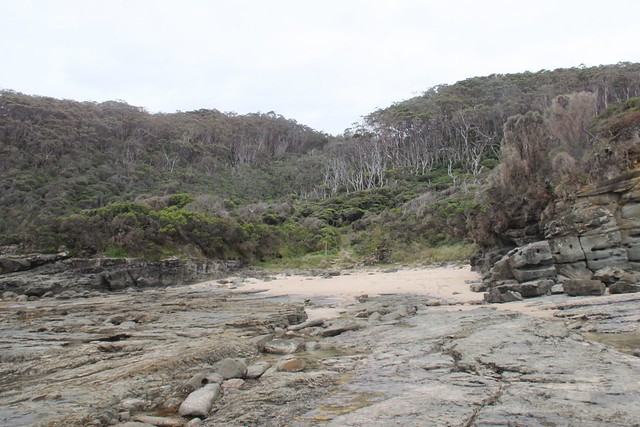 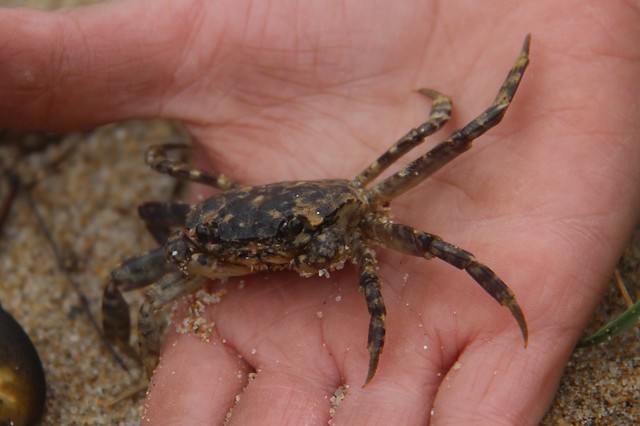 We started at shelley beach. This beach wasn’t actually shelley – that was around the corner. We walked most of the areas about 3 hours after low tide started. Despite encouraging Sethy to move forward, it take us about an hour to walk this. There is just so much to see and do which delays you.

Because of this, I would suggest starting from Shelley beach *before* it gets to low tide, perhaps 2 hours before. That way, you can clearly see ahead whether or not you can go around the corner.

It was incredibly tricky – but the views were magic. It was so secluded. 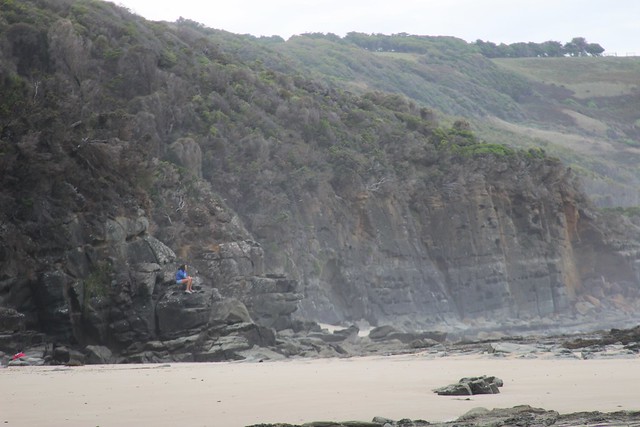 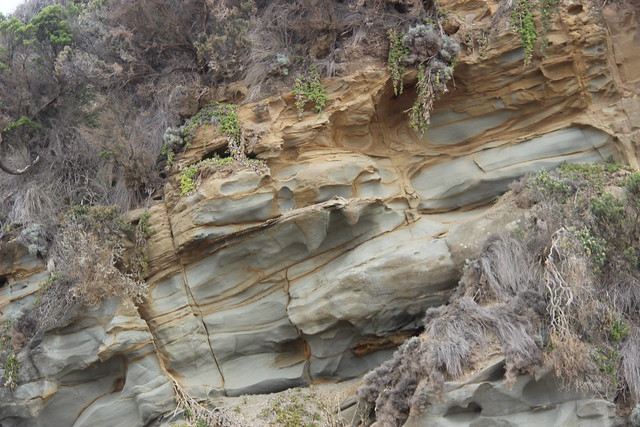 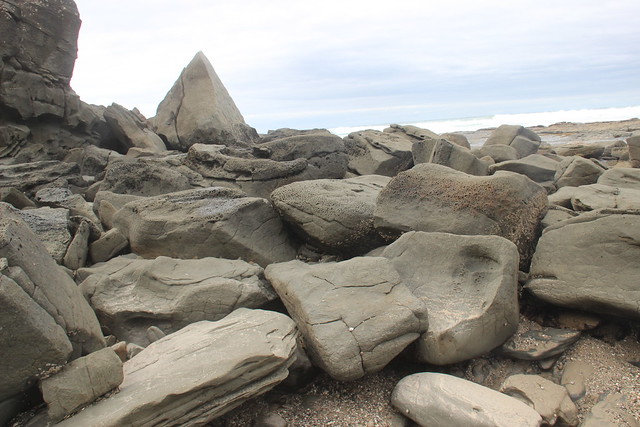 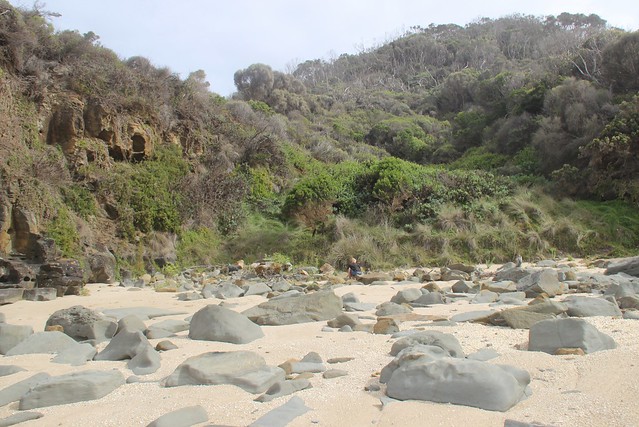 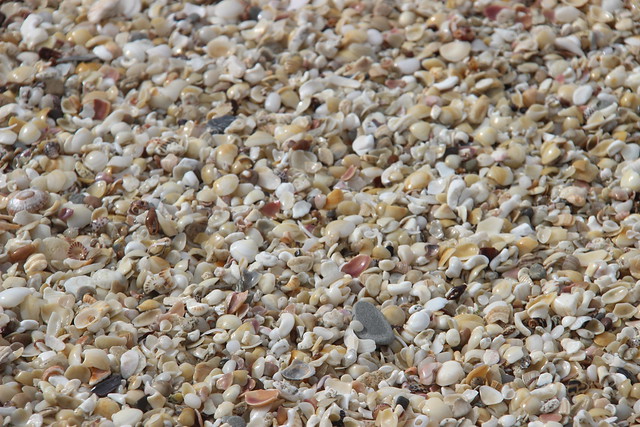 The above photos show the change in scenery in such a short area. We spent so long just looking at everything. One minute it was just rocks – rocks that were incredibly tricky to navigate. Then it was a beach just full of shells. Seth had a BLAST climbing over the rocks. He chose the hardest route and it really tuckered him out. That kid NEVER gets tired, so it was a bit of a surprise.

You do have to be really, really careful in this section, even if it is after low tide. We rushed this section as the map warned us that it could get quite difficult. For most of this section, we were okay, but there was one corner of rock scrambling where I was holding onto one rock with both hands and ended up slipping into the water anyway. My boots were soaked, I scraped some skin off my ankle and was pretty cranky. It was my misjudgement here, Sethy handled it a lot easier as he wasn’t carrying two bags and was in thongs. 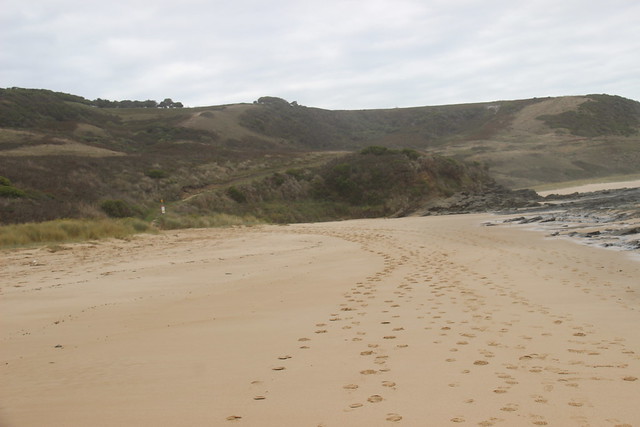 We went inland at the second they said so, even though it looked like it may have been possible to walk. I’m sure it would have been interesting, but I was responsible for both of our safety.

At first I was annoyed at the inland sections. It is the great ocean walk – it is meant to go along the Ocean. I felt cocky because I’d walked at Marengo and Blanket Bay before. Realistically, most of the walk is okay and could probably be done at low tide. 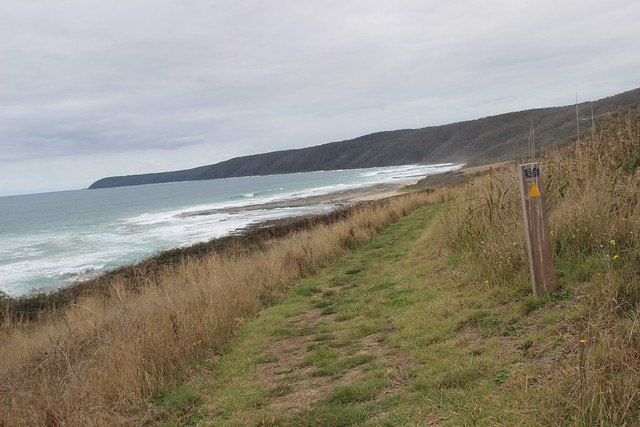 I didn’t mind the inland sections after a while though. The view was completely different and gave you different angles of the areas we had just walked. I’m actually interested in returning here and doing some circuit walks of certain sections. 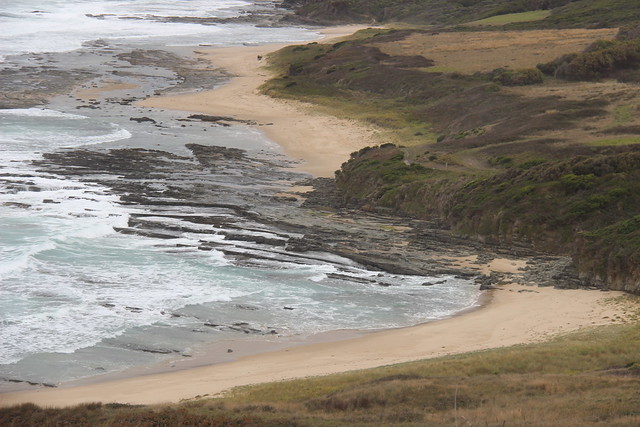 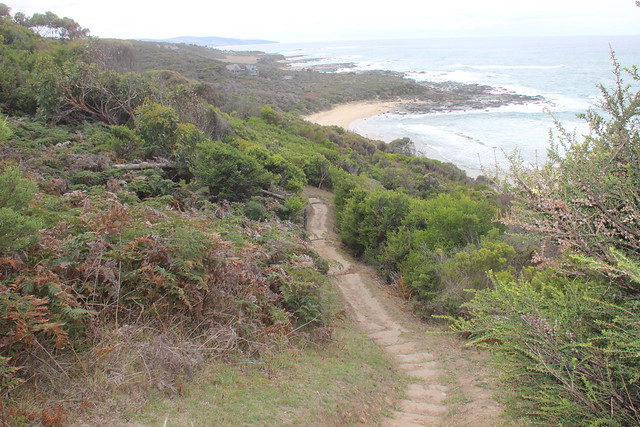 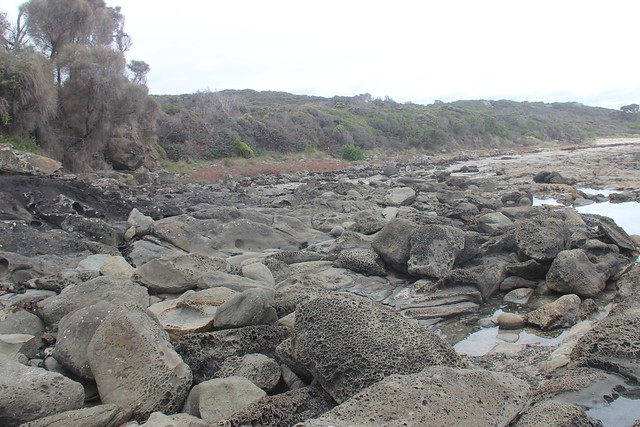 The inland section itself was quite lovely. I reckon it was possible to walk but only if you really, really knew the area. There were trails down to the beach from multiple points if you wanted. There was one section were there was a track back down to the ocean and we just sat for 30 minutes and watched the waves.

We reached the beach again at Bald hill and walked along the beach and rock scrambled a bit, which was appreciated after that little stretch inland. This particular section was a hit. There were sections that were relatively smooth to walk over, plus rocks a bit closer to the cliff that provided a bit of a challenge.  Sethy LOVED watching the waves hit and fall from the rocks here. After the rocks, it was very smooth rocks and then a beach until we got to storm point. After here, we went inland.

As we got closer to Marengo, we started to see more birds. This was unexpected and really awesome. There were eastern robins that weren’t scared around humans.  At one of the beaches there was hoodies, including a juvenile. The whole walk had a lot of wildlife for those that took the time to explore – we felt like we were only touching the surface. We had so much luck finding crabs under rocks that I’ve ended up buying a book.

We got to Haylay point when mum called, and we had a bit of trouble figuring out how to get to the Marengo beach carpark from there. That was primarily because the map was targeted at long distance walkers, the tide was coming really in and I couldn’t remember where the carpark was! We found them in the end, after walking through the caravan park.

Overall, the walk was a huge highlight. I’m a huge nature lover and I think we rushed it. There could have been more to discover if we’d planned it a bit better. If you are like me, I would recommend separating Apollo Bay to Blanket Bay into two separate trips. I may be struggling with how to combine my love of nature with my love of hiking yet, though. Always feels like I’m rushing the latter parts of any trip to make sure I can get home!

Overall, I really enjoyed it. It was cool watching the cliffs and rocks change. The distance was just perfect for Sethy. Lots of rock pools, rock hopping and watching waves. The sheer variety meant that we wasn’t really bored. Hoping to find ways to involve him in other parts of the walk.