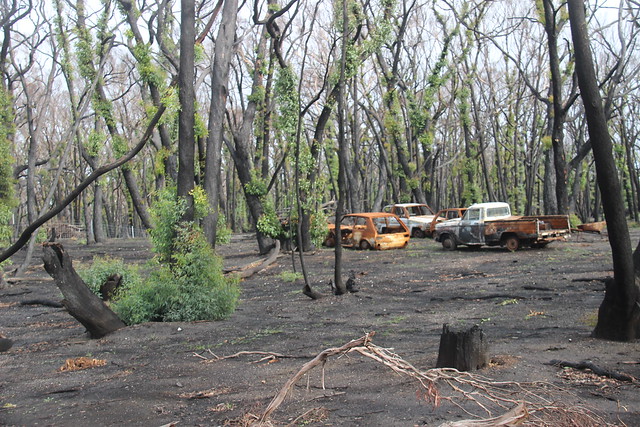 Just before Christmas, 2015, the property was hit by bushfire. Since then, I’ve been documenting the recovery and how the environment is responding.

The Bush Block Got Burned: Part 1

This post shows what the property looked like the week following the fire. It was quite confronting. The cars we had all learned to drive in were burned. The shed and gazebo where we sat on many winter nights were flattened. There were some animal carcasses. There was no life, no greenery. Until we got to one of the neighbours, whose fields were still green.

During this visit, I tried to take more creative photos to show the destruction. We did see an echidna and kangaroo, which was reassuring.

More Photos From The Bush Block

A week after the previous visit. I was surprised to still find skinks.

Ants from my parents bush block

We found a healthy ant nest near the dam – so naturally I took a lot of photos. This was the main nest we saw.

Signs of life at the Bush block

This was taken a couple of weeks later. Ants were starting to return and I saw a decent amount of birdlife. I didn’t see as many birds for quite some time.

Signs of life at bush block

Lots Of Regrowth At The Bush Block

We were getting more and more regrowth. It was growing about a foot out from the trees in some places and in others, growing independent of any trees.

Lots Of Regrowth At The Bush Block #2

This visit, I showed the regrowth in a winder context. You can see the green up to the top of some trees and we were starting to be able to tell which trees had definitely died.

Autumn Regrowth at the Property

I didn’t have the change to return here for a couple of months. The absence meant that there was a significant contrast between visits. My parents had cleaned up the wreckage from the shed. There was a lot of groundcover returning and a couple of specimens of fungi.

Groundcover is Returning At The Property

After 6 long months we were finally starting to see groundcover returning. Grass and sundew were popping up in their previous haunts. There was alsoan increase in bird activity; especially the first sighting of a wedgie!

May was unseasonably warm. As the cooler weather hit, we noticed a lot more fungi around. We’ve been making an effort to document this, although I’m struggling with ID’ing.

We finally got someone in to help with the cleanup. It was a bit of a shock seeing it compared to what it was like before. The tractor knocked over some of the fungi. It forced us to look harder to find interesting specimens and we found some new types.

Sunny Day At the Property

Finding Decent Bugs – And Fungi! – At The Bush Block

Last Winter Visit To The Property

Returning To The Property: 20 Months On

Returning To The Property: June 2

Fungi At The Property: June 2

Fungi On Tree: Late June At The Property

Animal Scat At The Property: June 24

Fungi And Ladybirds At The Property: June 30

Invertebrates At The Property

Juvenile Brown-headed Honeyeaters At The Property

Visiting The Property: May 2020

Galls At The Property