It was Saturday morning. According to the Regent Honeyeater Facebook Page there had been 50mm of rain. It certainly felt like that. I’d worn earplugs the night before but still woke up multiple times during the night due to the intensity of the rain. I was very glad I paid $90 a night for a hotel room rather then attempt to camp like some of the others.

We went to Bartleys block briefly before heading to honeyeater picnic ground for the briefing. It was a very well run ship, and everyone involved with the recovery efforts were super helpful.

We spent about 30 minutes getting told about the work that had gone into the program and getting welcomed by the indigenous elder. We were told about the safety precautions we had to take and about how we had to be quiet around the birds.

It was a struggle to hear at times, due to the intensity of the rain. One of the staff overheard me asking questions about harness safety and answered them.

It sounds cavalier, but I hadn’t yet gotten that interested in regent honeyeaters. Bad birder! I had my obsessions – parrots, robins, ducks, – and hadn’t ‘bonded’ with the species yet. I went this weekend because I knew it would be an opportunity I would cherish as I became a more experienced birder. It was a chance for me to learn. It would allow me to explore one of the best birding regions in Victoria.

Five people walked up to the tents. Despite the rain, everyone had pointed their cameras at the tents. They unzipped them at the same time.

Then a large group of them flew out to a nearby tree. We were all snapping furiously, despite the dodgy light. I don’t think many people got shots of them flying out, which would have been fantastic.

Then a noisy friarbird – an ill timed lifer – flew into the tree and scared them away.

We didn’t see them nearby after that. Many of the remaining ones (smartly) hung around inside the tents.

The following photos show what happened, although they are rather boring. It was a magical experience to be a part of despite my naivety. I did buy the DVD and two pins, and will be doing further research. Maybe see if I can contribute my social media skills to the project?

Regardless, their website is shite and the link from the fb page leads to the woodlands project. Will analyze later. 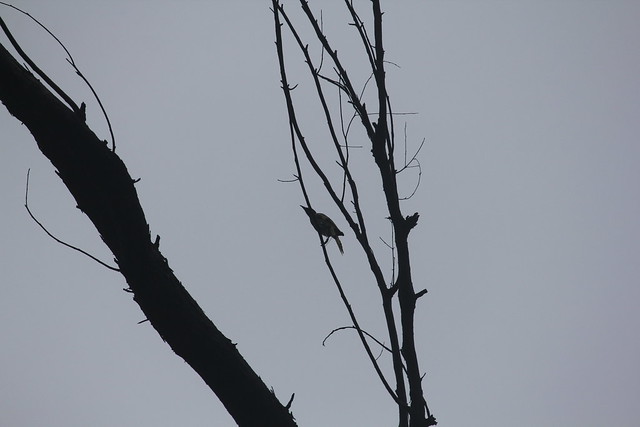 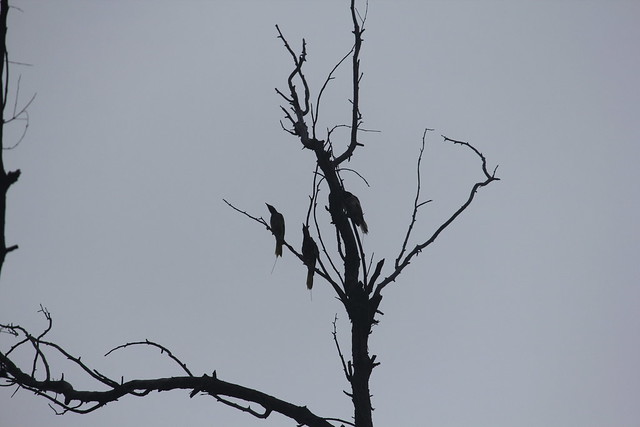 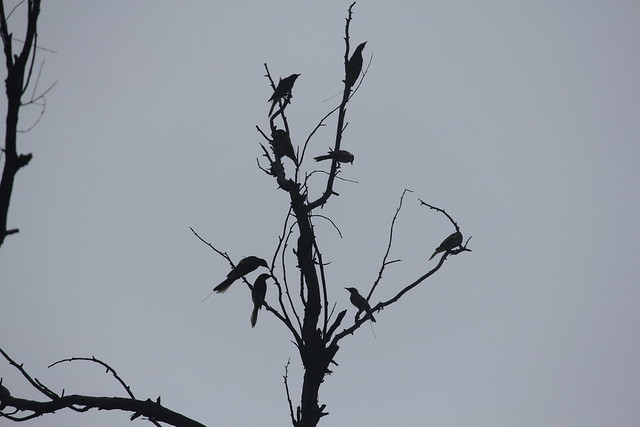 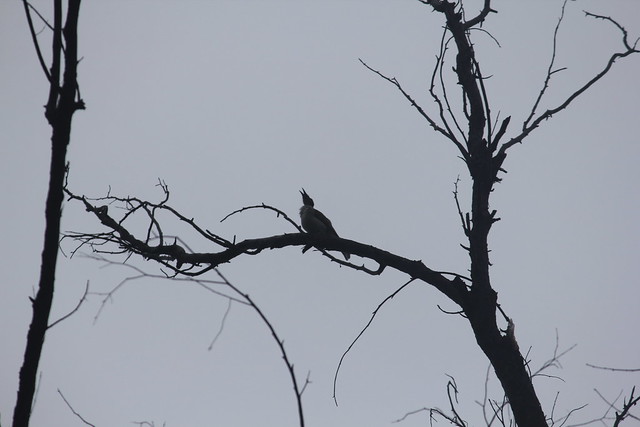 On Saturday, I opted to have a break in the afternoon. I’d had a really rough nights sleep and wanted to go to the pub, and then go owling that night.

Turns out that after they had dropped me off, everyone went to the caravan park to look for a recently reported regent honeyeater. Guess what they found? A wild unbanded one!

Now, I understand why nobody told me until afterwards. I made the choice to have time out (moreso, my hungry tummy did) and be by myself for a bit. However, I walked past the caravan twice both times when I had gone into town.

It didn’t matter. We met at the caravan park prior to leaving the next morning and got some amazing views of the regent in considerably better lighting. This was such a relief. I’m a newbie and don’t know how hard it would be see one in the wild. I didn’t know how hard I may have to work in the future – or how much it would cost.

They were very selfish thoughts, yes. Things have been rough here lately and I’m not coping well.

I know I as unable to properly appreciate it at the time, but it was such an honour to see the bird. I need to familiarize myself with it’s call and behaviour to help me find and identify it in the future. 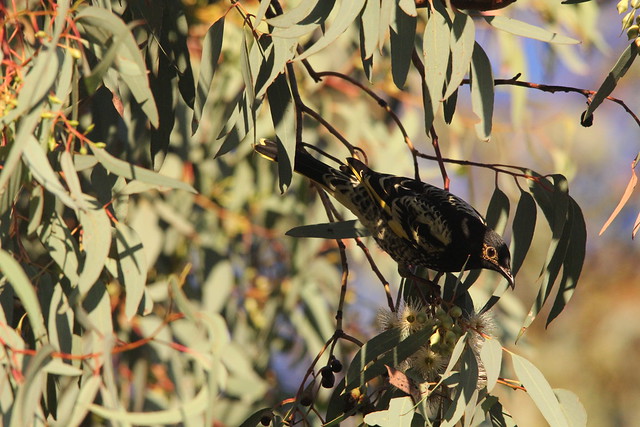 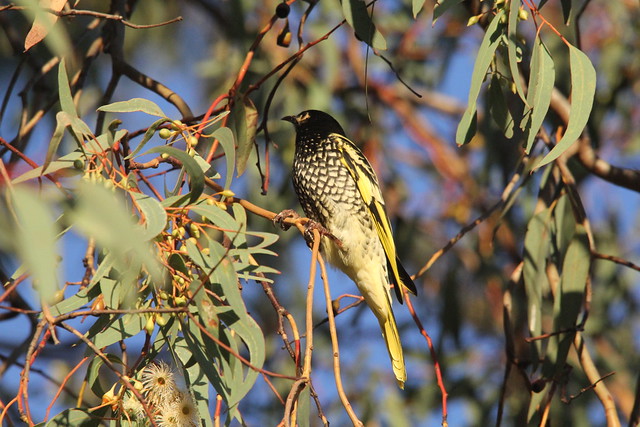 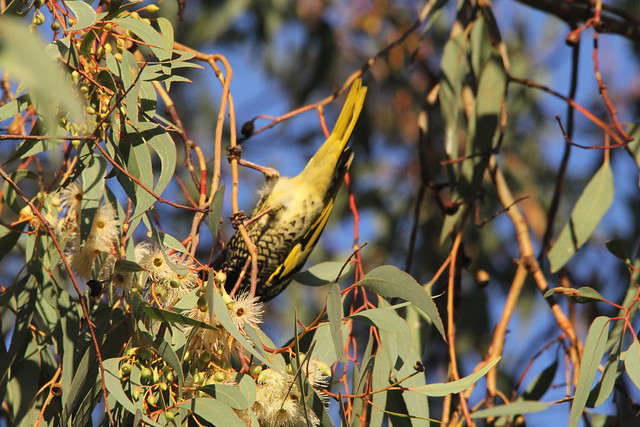 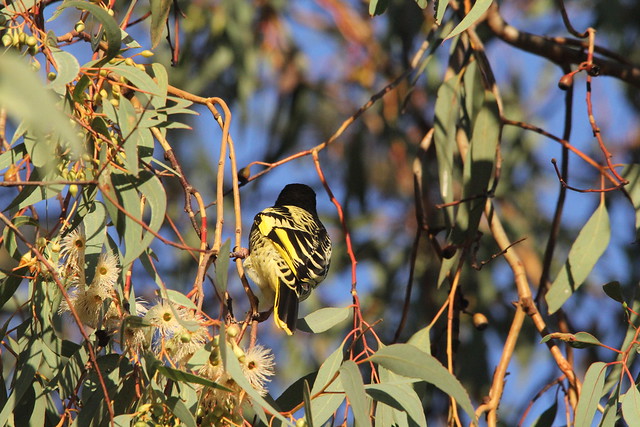 Currently, there is a discussion going on about whether there was one or two unbanded birds in this particular tree. I have no idea, but the whole conversation is exciting.

I will be following the progress of these birds and doing more research into the recovery efforts. I was super impressed with what I saw.

I have further photos in my regent honeyeater album on flickr