On Sunday, we went to the Ballarat Gem show. It’s not really my scene, except for the fossils, however it was the first chance I had to go to the property in over a month.

By the time we got there, the weather was horrid. I only got to have a 20 minute walk between heavy showers so didn’t get to have a proper look. This means my notes are crap. Regardless, we did see some differences. 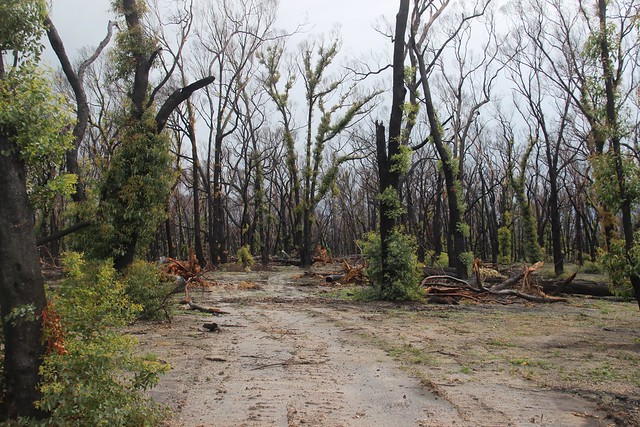 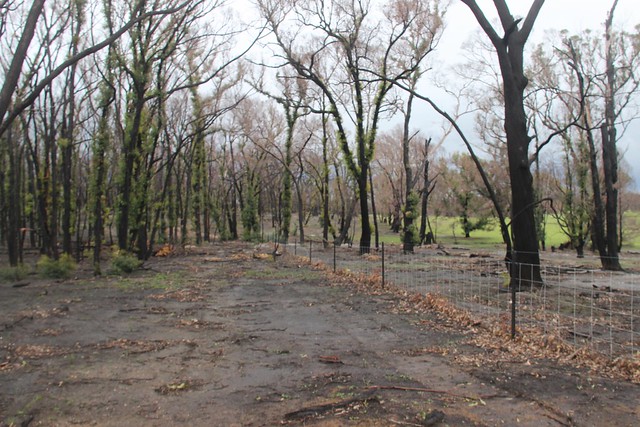 There was so much more greenery, both on the ground and on the trees. It was awesome. Because I was covering a large distance, I didn’t get to focus on as many as the subtleties as I would have liked. I could definitely hear a lot of birds. 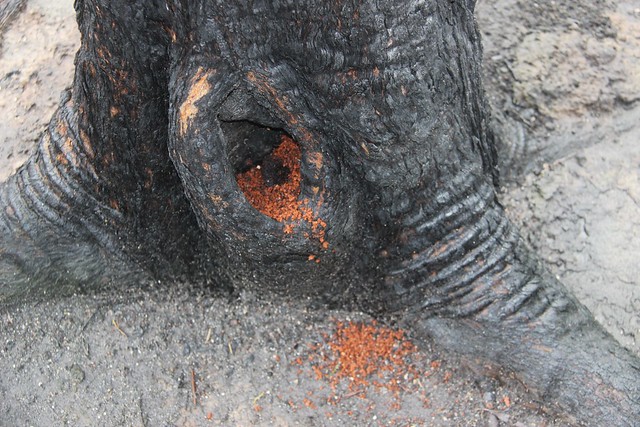 There was also considerably more signs of animals. Mum found some skulls that were white, which meant that the animals hadn’t been killed in the fire. I did see some paw prints that looked like a dog or a fox. It was spitting so I couldn’t get photos.

This is the really exciting bit. I’m starting to see a wide variety in plants. It’s not just goodenia and sundew now. I’m not able to tell what many of them are, considering they are young. I’ve asked questions about them and hopefully I’ll learn more.

Seeing these has got me obsessed with finding out more about plants so, alas, there is another area to research. For now, I’m just going to ask for help as I can’t do this by myself. 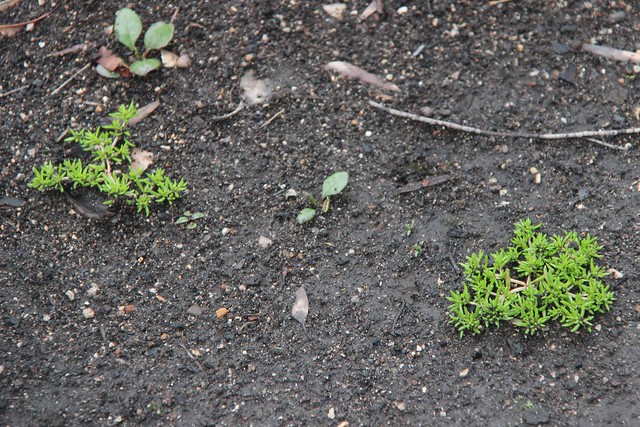 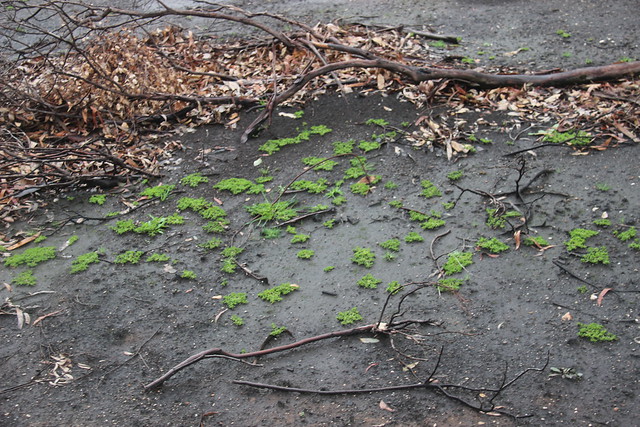 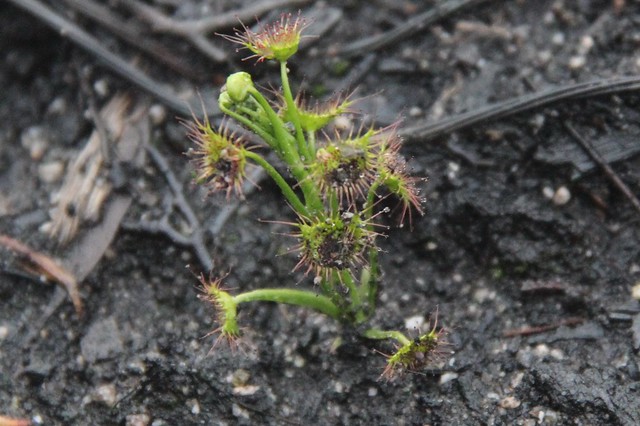 The above is what I believe is a tall sundew, it is so cool. I’ve never seen it here before. The absence of leaf litter means I can focus on so much more. I’m realizing that the time I’m spending here isn’t nearly enough. I could spend hours getting photos of the different kinds of sundew. Mum said she hasn’t seen it before but granted, we are mostly looking for fungi. 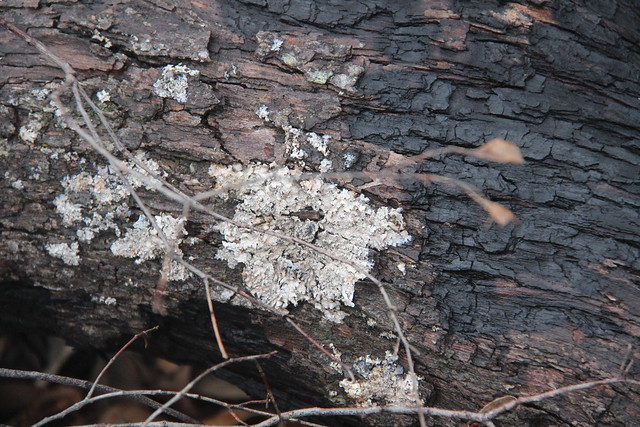 Some lichen I’ve found. Still not having any luck in figuring out how to ID them. 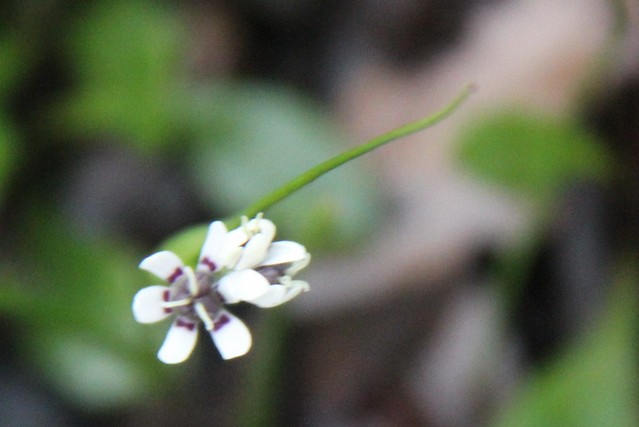 This is an early nancy, a common plant that flowers earlier in the season. First time I’ve seen it and it somewhat looked like an orchid. I’m so thankful for my community who are able to help me with plant identification. I struggle so much, even with the books out.

The awesome thing is that someone posted a similar looking plant in a separate Facebook group looking for an ID. I immediately thought “Oh, that looks the same as this one.” And I was right! 😀 This shows that I am learning, I am picking up on information. However, this blog is one of the best ways for me to keep track of stuff because my memory is so shocking.

This was one of the priorities this visit and Sethy was really good at it. I didn’t look at all areas of the property, it was mostly the central areas close to the dam. We didn’t have much luck. Mum looked at a different area and didn’t find much.

We did find the below orange ones, which was cool. I initially thought it was Anthracobia muelleri, seeing as they were a similar orange coloured to the fungi that we had previously assumed was spores. We hadn’t seen any of them this visit so I just assumed it could have grown up.

I put it on Bowerbird. A friend said it looked like there was two different fungi and there is a possibility the one on the left is Aleura aurantia, which is also called orange peel fungi. (He did emphasis he wasn’t confident in the ID – I’m putting it here so I can reference it later). That particular fungus is common and not related to bushfires so much.

According to Fungi in Australia, Aleura Aurantia:

This attractive bright orange cup fungus grows on soil, usually in small dense groups. The cups have an almost non-existent stripe at the base, and flatten with age.

Guess I need to pay more attention to it next time I’m there! 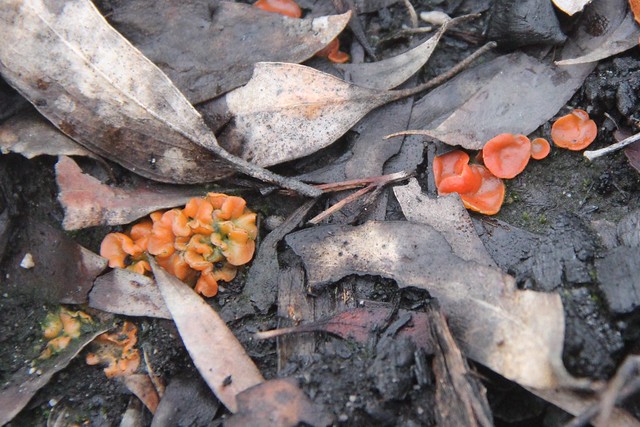 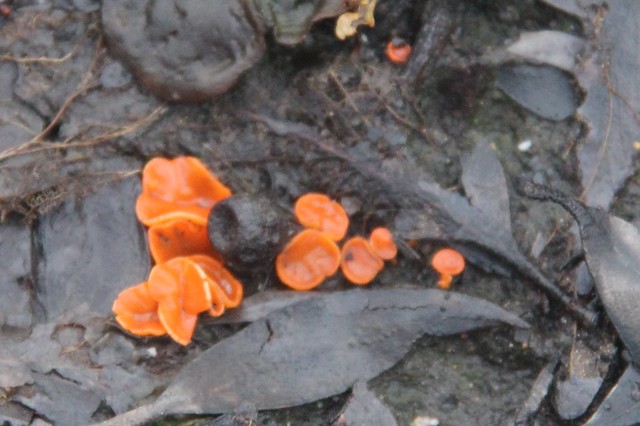 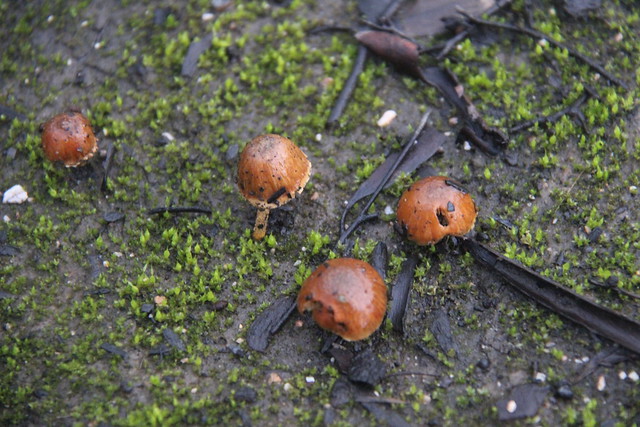 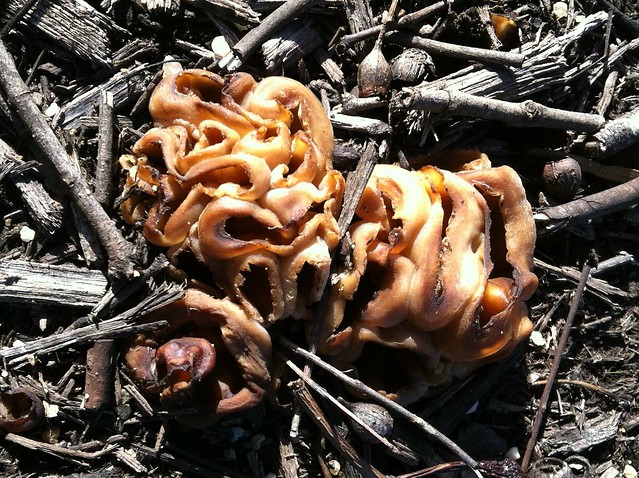 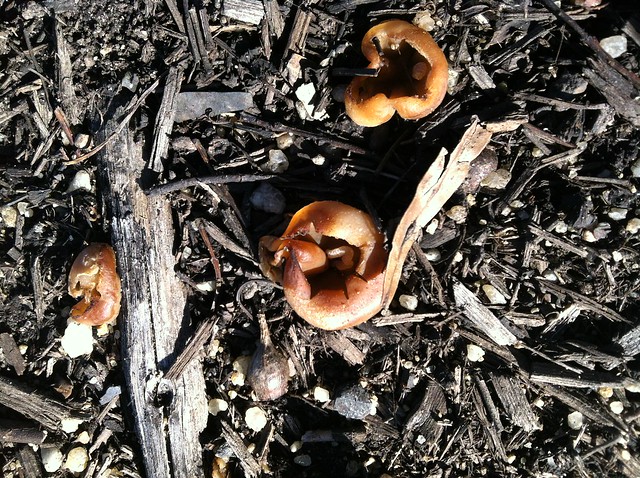 No idea what the other fungi are, although the final two photos are my mums. I may email a friend for help, although the sense of urgency has gone as these don’t look like bushfire related ones. My main thing now is looking out for orchids, which is hard as I’m a bird nerd. No idea what I’m doing! I need a better system for remembering locations. Either ribbon or a GPS thingy.

Hope to get there again soon. Although I have a separate trip to Tassie coming up so my brain is going to explode from all the new information. It’s awesome though 🙂 When I eventually return to uni all of this knowledge will help so much.