Killarney beach was a bit of a shock. It’s an area that is raved about and is meant to be brilliant for shorebirds, especially ones like ruddy turnstones.

It is actually a brilliant place. The image below shows some of the birds you can get at the beach. The issue is that a lot of the birds don’t hang out on the beach itself. They hang out on the rocks, offshore. And, unfortunately, my zoom lens wasn’t really good enough to see them. For that, we needed a scope. 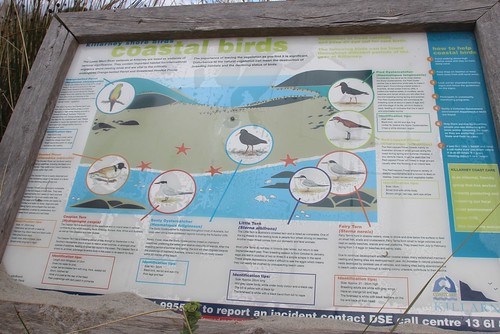 Fortunately, two members of our party had scopes and they were able to point out various birds to us, including my first ruddy turnstone! I was so excited to see that, I did a little dance. I think turnstones are beautiful and would love to observe them more often.

The below two photos more of what the beach looks like. It is sparse, until you see the rocks further out. 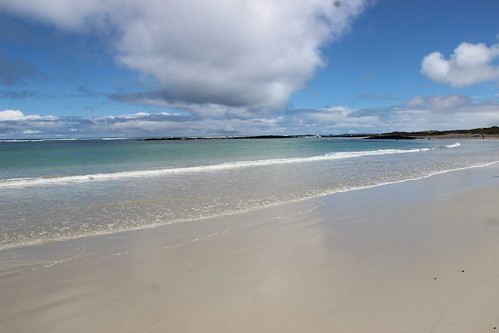 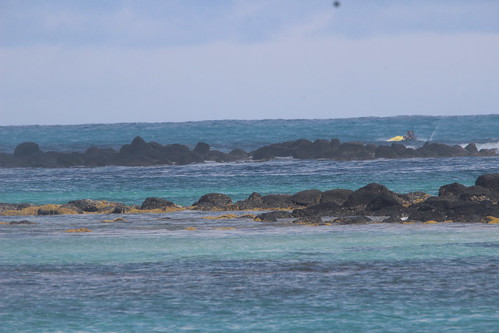 We walked further up and came across sand with a decent amount of seaweed. Jack commented that this looked like ideal habitat for hooded plovers… and he was right. I never knew that before. 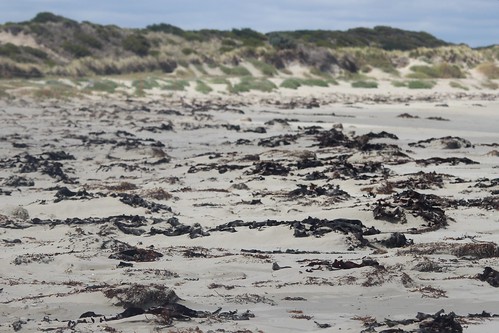 We were lucky and saw two in that little patch of the beach. Later, we saw 2-3 more. I couldn’t get the details of their legbands. It was so encouraging to see this, as some people can be quite rude about making way for the birds on ‘their’ beach. 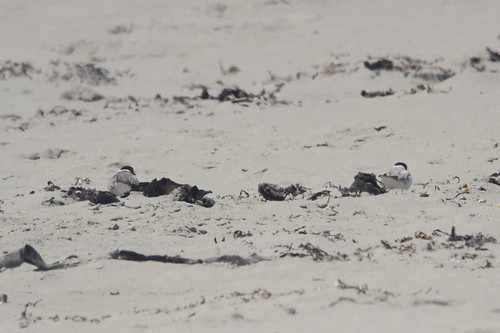 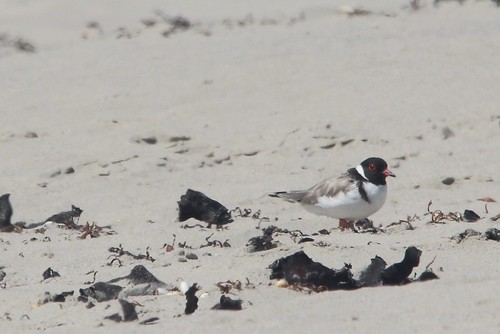 Apparently you can tell the below is a kelp gull because of the white rump. 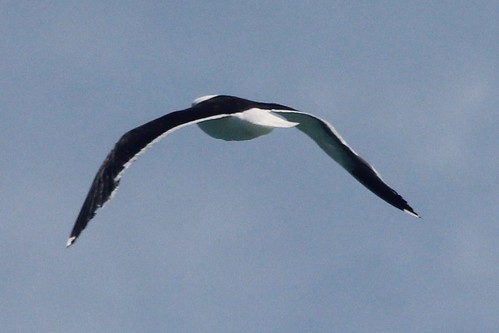 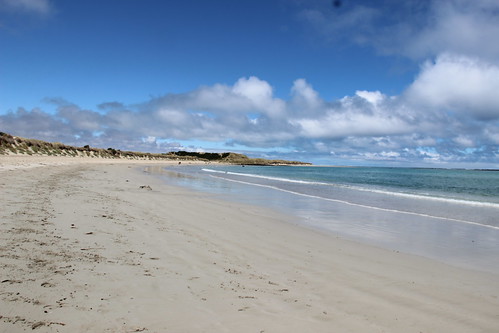 I quite like Killarny. I would love to learn more about Warrnambool in general. So many amazing things to see and so little time. Whatever will I do? 😉

I spent 4 days last week with my family in Apollo Bay. It was meant to be a break from the monotony of Geelong. There would be no set agenda – we would go with the flow. I agreed because I thought the birding would be different, and I was right.

I had googled ‘birdwatching in Apollo Bay’ without much luck. Imagine my surprise at the information centre when I saw this: Did you know that the Otway Coast is home to the endangered Hooded Plover? The Hoodies share this beautiful stretch of beach with many other visiting and resident shorebirds. You can learn about our birds and their habitat by exploring this coastal trail.

The trail is approximately 2.5km long and starts here at the Apollo Bay Information Centre. It ends at the mouth of Wild Dog Creek. You will need a smartphone with a QR reader.

It would suck if your phone didn’t HAVE a QR reader. I work in digital. QR adoption is meh at best. I could have downloaded a QR reader if I had decent internet. Alas, I was a tourist and my internet reception sucked. I thought I’d be okay if I went home and googled it.

I was able to find this from a website earlier today which was equally as helpful:

Welcome to the Apollo Bay Shorebirds Trail. There are two trails (Marengo to Barham and Apollo Bay to Wild Dog) and each one lets you explore the environment and history of our coastline. Along the way you will learn about the shorebirds that make the coastline their home, with a particular emphasis on the endangered Hooded Plover. To complete the trail you will need a Smart Phone with a QR code reader. No QR reader? No problem. Download a free iPhone app or a free app for Android. If you’re at the Marengo Beach Car Park, head down onto the beach and start walking back towards town. From the Apollo Bay Information Centre, head out of town towards Skenes Creek.

Keep your eyes peeled for the pine posts with QR codes attached – you will find 10 along each trail.The first nine stations of each trail will ask you a question, the answer to which will be found at the next station I almost didn’t find them. I started the walk at Wild Dog Creek, as the sign originally said. I was about 1km back when I realized that I hadn’t seen any birds. Surely I had made a mistake somewhere? I turned to my incredibly slow iphone for confirmation.

Originally, all I could find was this update on hooded plover chicks. I rephrased the search and found this info on a birding blog:

This beach has a pair of nesting Hooded Plovers. There is a pull-in spot just opposite Wild Dog Creek Road and the birds can be watched without disturbance from the edge of the roped-off area. They breed from about October to February. Outside these times, Hooded Plovers may be found in similar areas and around reefs and inlets locally.

Frustrated, I walked all the way back and crossed the creek. And then… I found the roped off area! And saw the artificial nests. But still, no hoodies. Then.. Despite what others have written, this bird was uncomfortable with my presence and walked out of the fenced area. I kept my distance, snapped three photos and immediately walked way. I felt that conservation was more important then satisfying my birdwatching whims.

I saw some other interesting things on the walk back. I followed the shoreline which was a beautiful walk. I spent half the time in the waves and really enjoyed it. My calves got a solid workout! I have no idea what this bug is but thought it was pretty cool. I found two of these empty crab shells and took photos to show my nephew.

We need to do more about shorebird conservation.

Hooded Plovers are the most threatened of them all, as they are the birds which inhabit the beaches most people like to visit. Their eggs are small (about the size of a 20-cent piece) and very well camouflaged, so they are easily trodden on by accident. If the incubating adult is scared off the nest by passers-by, the eggs may literally bake in the sun, or become too cold in the cool weather; either way, it kills the chick developing in the egg, and the egg will not hatch. Similarly, when people disturb a fluffy chick, it quickly runs into the sand dunes and hides. While it is running, the chick uses up valuable energy, and while it is hiding it is unable to feed (they usually forage at the water’s edge), so that a chick that is forced to run and hide throughout the day could easily starve.

Hooded Plovers (in their eastern range) only occur on sandy beaches that are exposed to the ocean swells and backed by sand dunes; of course, these beaches are where most people choose to go. Beach-nesting birds, including Hooded Plovers, lay their eggs directly on the sand in a simple, shallow nest scrape. The nest can be anywhere above the high-tide mark, on the beach or in the dunes.

I rarely go to beaches and this was my first time looking for hooded plovers. Based on what I saw, we aren’t doing enough.

Most people weren’t even area that they weren’t meant to go near the fenced off areas. There were so many people and dogs near the site at the mouth of Barham River. There were many dogs off leash and very few signs. It is a popular site, especially for kids, so this is understandable.

One small sign at one carpark is not nearly enough. A little bit of rope along fencing with the occasional sign is not enough. Most people won’t see that and, if they do, why would they care? Who wants to let a puny little bird cramp their summer fun?

Selfish or ignorant holidaymakers are threatening one of the world’s most critically endangered birds by letting their dogs roam free within metres of nesting chicks.

The main issue here is ignorance. I’m an animal nerd and I didn’t know about this until recently. I loved seeing the plovers in the wild but the ignorance shown by fellow beachgoers really concerned me.