It’s the a story that I think is going to repeat itself multiple times this year. I promise Seth we can go adventuring if he is good. He actually behaves. I end up spending an hour plotting, trying to think of something interesting we can do that is something other then ‘Lets walk along the Barwon River.’

The Barwon is awesome. It’s fun. He’s going to be seeing a lot of it now that school is returning. He was hankering to see a blue billed duck. I thought the birding would be more interesting at Jawbone, and was certain we’d see a blue billed. We caught the train to Seaholme station and off we went.

Of course, the birding started before we got to Altona Coastal Park. We did the same walk that I did in this post. I thought it was a reasonable distance that could take him through different environments.

We saw many birds of prey on the way there. Unfortunately, I’m unable to ID them quickly yet. Seth was saying what he thought they were or, moreso, what he hoped they were. At a trainstation near Laverton we saw magpie geese on the side of the tracks! We were very shocked.

There were many musk lorikeets and a little wattlebird in the tree outside the station. Was hoping to luck out and see a little lorikeet 😉 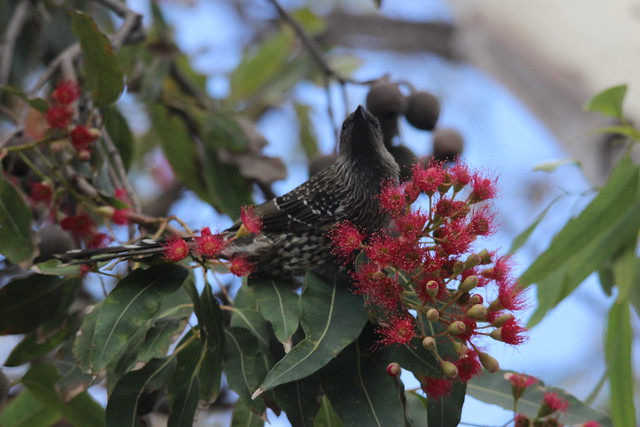 We then walked to the beach, where someone got distracted by being a 6 year old at the beach. We looked at shells and marveled at just how many dogs were at the beach in the area. I always let him muck around and be a kid on these walks, provided we at least keep moving so we can get back at a reasonable time. 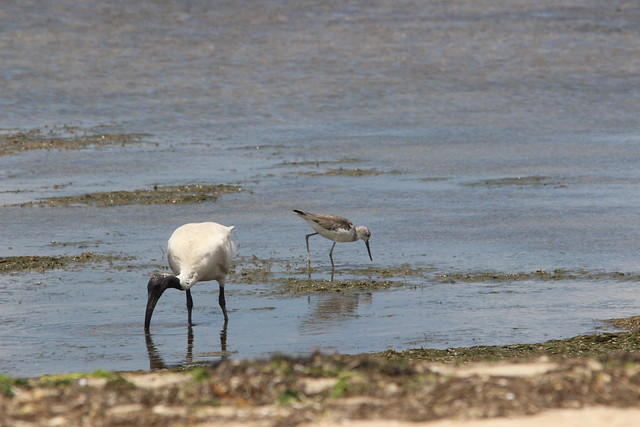 I saw these two birds at the beach! Turned out all the birds I saw that day were Common Greenshanks, just like Sethy said. I was really hoping to find a common sandpiper, which had been sighted in the area. Alas, no luck. 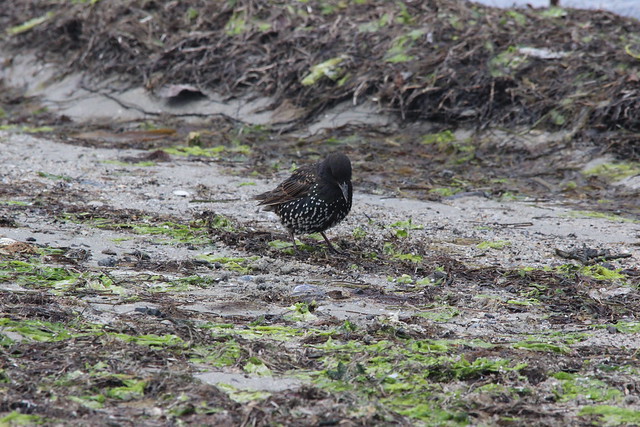 Seth repeatedly asked me to get photos of what the little black birds were, even though I knew. Here is a close up of the starling. 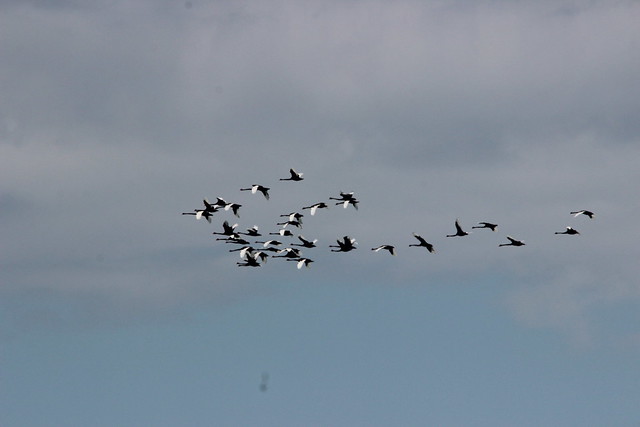 Large flock of swans. Seth now really loves swans. We got photos of any bird that had a tag around it’s neck and submitted them to myswan. Seth helped point out the tags. At Jawbone, he started hooting at a pair who were kind enough to talk back. 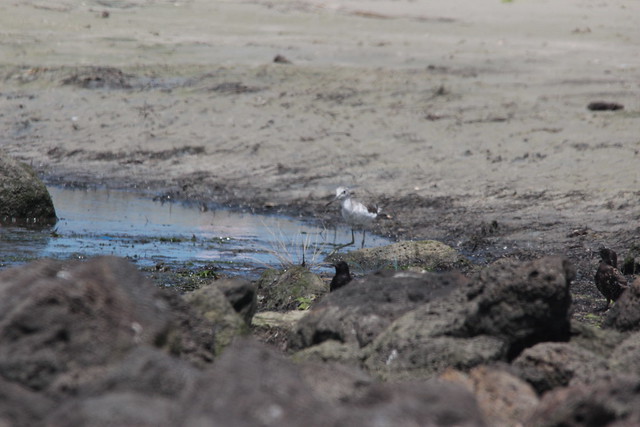 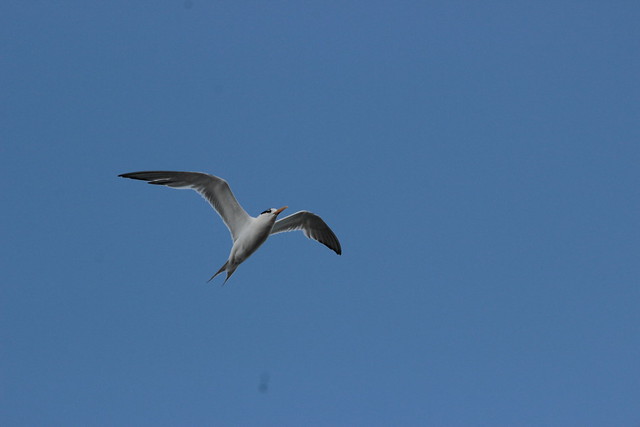 Beautiful tern. This was flying over as we were walking towards the coastal park. 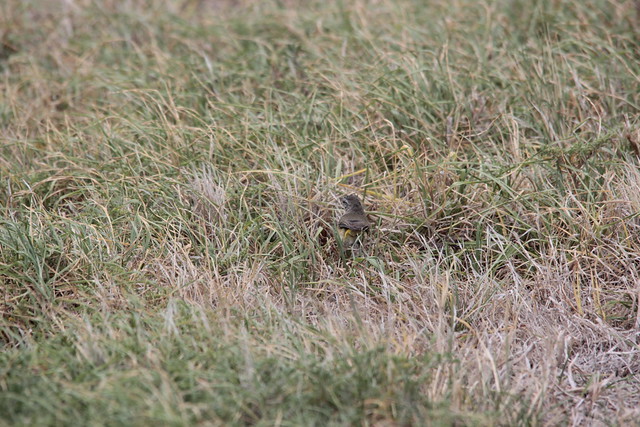 Yellow rumped thornbill! I wasn’t able to ID it until I got home. I thought the rump looked way too bright, and it didn’t appear to be hiding like so many thornbills that I saw. Someone was amused because the word “rump means bottom.”

It had been about two hours since we had left. Mum called to see how we were doing. At the exact moment I answered, Seth found this on the path. 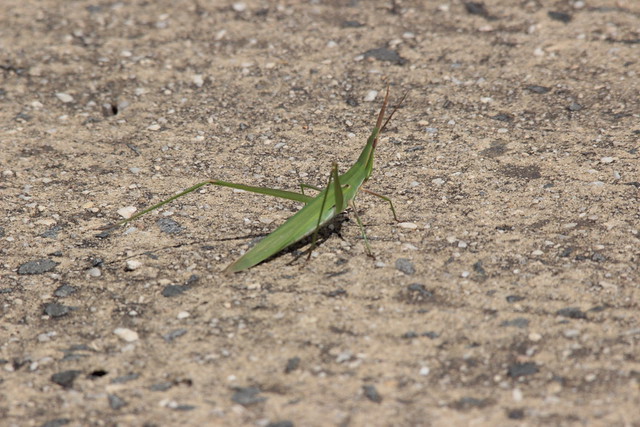 Seth loves bugs and critters. Loves them. I couldn’t talk to him and mum at the same time, so I hung up so we could investigate further. He put it on is hand and we looked closely at it. I know grasshoppers are common but seeing one this size and so well camouflaged was brilliant. Look at the photo below. 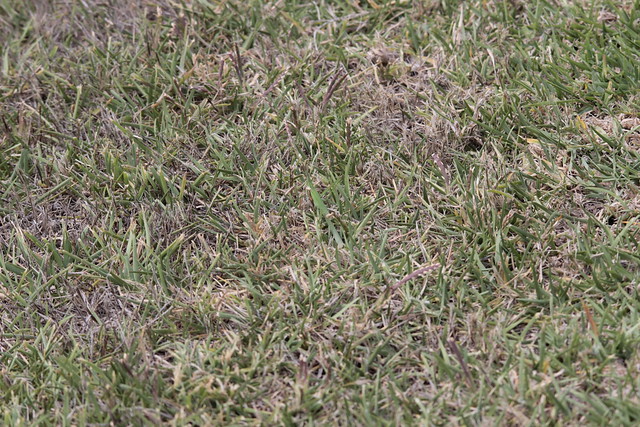 Try finding the grasshopper. Seth found it immediately. Eventually, I had to pull him away. 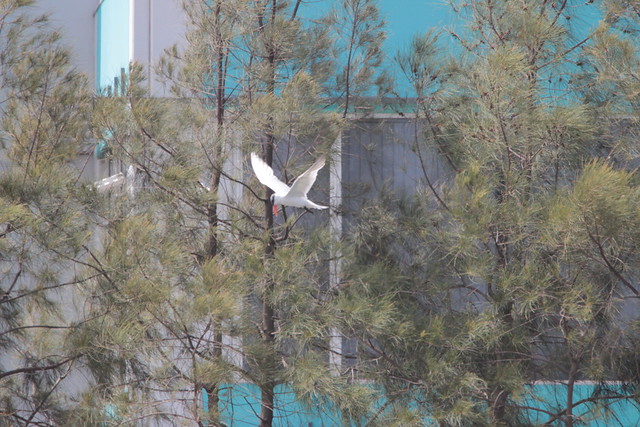 We had to wait around at the walkway over the creek because Seth saw tiny fish in that water. He can be really awesome on adventures, helping me find stuff that I otherwise wouldn’t see. And I get a buzz out of showing him different environments and ecosystems. There were a couple of terns floating around. 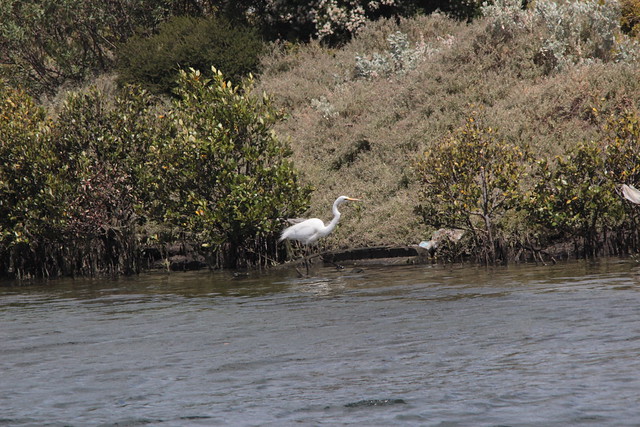 I had to ask for help with this one – I still struggle. It looked smaller, the kink in the neck wasn’t as pronounced and the gap didn’t extend back that far. I may just have to accept that this is a bird I will struggle to ID for some time.

We were walking between the birding areas when Seth pointed to something on the side of the track. “Look, fungi!” I didn’t believe him at first. I went “no there’s no………………..t,” with my voice getting really high pitched towards the end. I was that surprised to see fungi at the beach. I thought that they liked the damp and cold. Definitely something I want to investigate. 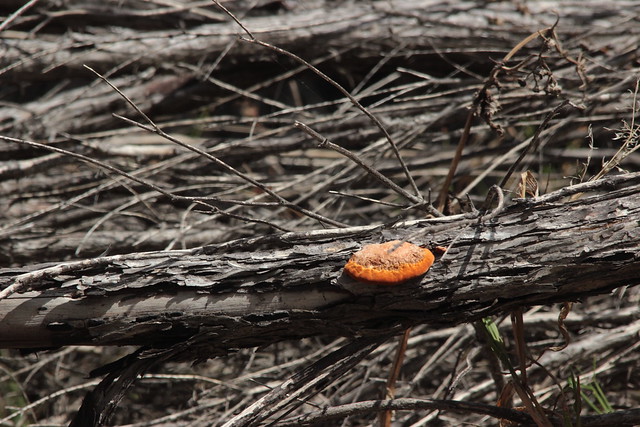 We heard a rustling in the trees and went to investigate. Seth said it was a honeyeater. I wasn’t too sure as it looked too small, but we checked on the app and with his field guide. Yep, it was a singing honeyeater. Lifer number 2 for the little dude and possibly my first lifer for the year. 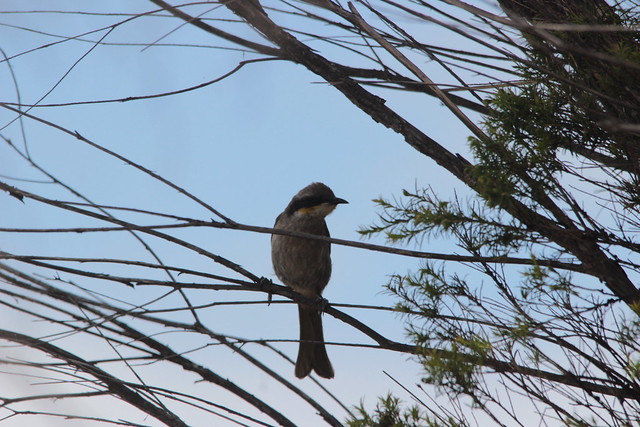 Yet another fungi. Seth is awesome for finding fungi. 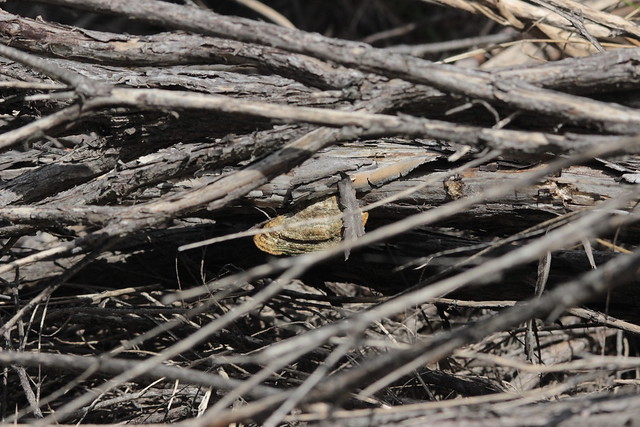 Walking towards Jawbone we saw a great crested grebe. Third time I’ve seen one and a second for Seth, but now we both have a photographic record. Although I already had one from WTP. 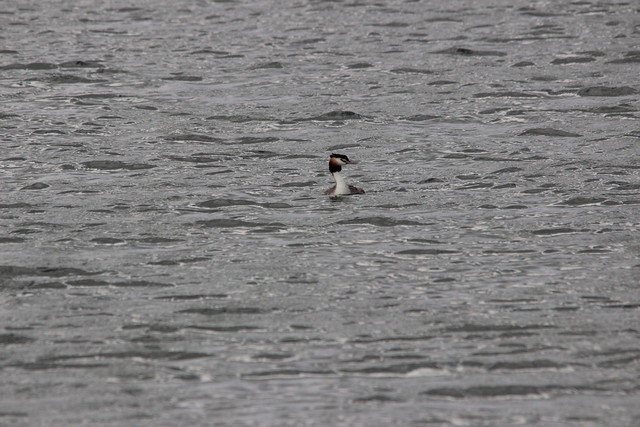 We got to Jawbone and had a little bit of a wander. Seth was disappointed about the lack of quails, especially because he was super quiet. We did see a lot of rabbits. I knew it would be unlikely. Will definitely seek out quails in the future though. Or, as he repeatedly called them, guinea fowl 😉 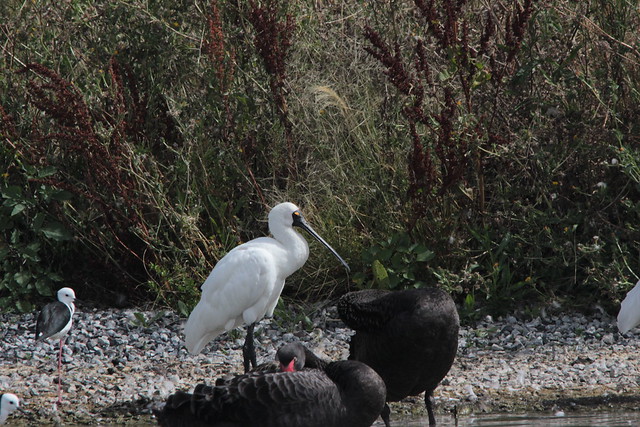 Always fun to see another spoonbill. 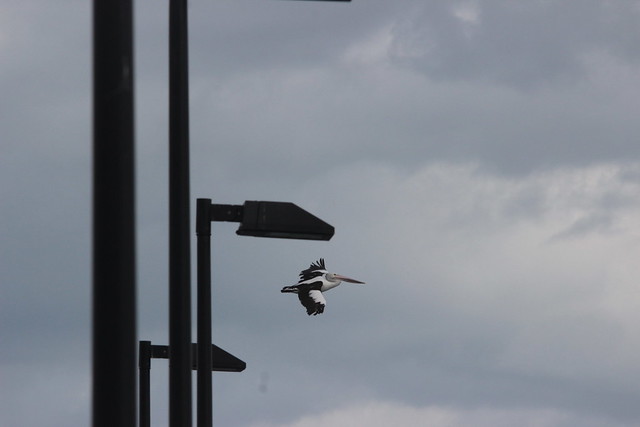 A pelican flying past Williamstown beach

It was a pretty big day, with what felt like very little return in terms of wildlife. Seth still had a blast. It was just the little things that you see when you go to a different environment. We could probably find similar things closer to Geelong but I wouldn’t know how to get there. Here, I was familiar with.

The blue billed duck wasn’t there, which was a disappointment. We also didn’t get to play in any of the tempting playgrounds. Fortunately there were a lot of toilets and places to refill your drink bottle along the path. And, I got to teach Seth more about the area. I’d love to take him back to Williamstown and explore the main beach/pier area, and then catch a ferry into the city.

I’ve noticed that I feel a lot healthier, and feel less agoraphobic. Our adventuring started out so he had something fun to do over the holidays, as my parents have been so busy with moving. I think it’s really benefited both of us. He’s learning lots of little things, like he does when he’s with my parents. I find it fascinating watching his brain develop. I’m also keen to take mum to some of these places, as Seth would love to share things with her.