I know I posted about another sea hare recently. In that case, it was obviously something unique. In this case, Seth managed to convince me that it was ‘just an elephant snail’ so I moved on and didn’t get any more photos. I should have listened to my gut.

I sought an experts advice. He said:

I suspect that this is A. juliana. It can get to this dark port wine colour with few other patterns present. In life it’s most characteristic features are its locomotion which can be like a looping caterpillar nose to tail sort of ‘walk’ and it does not ink like other large Aplysia. Eastern Australian a juliana get so black that it was also called A nigra by one taxonomist.

Although the dark mantle border is a characteristic of A parvula it is always a relatively small slug.

I now really, really want a Gopro camera to aid with identifying sea animals. I’m so broke though – my current resources will have to do. 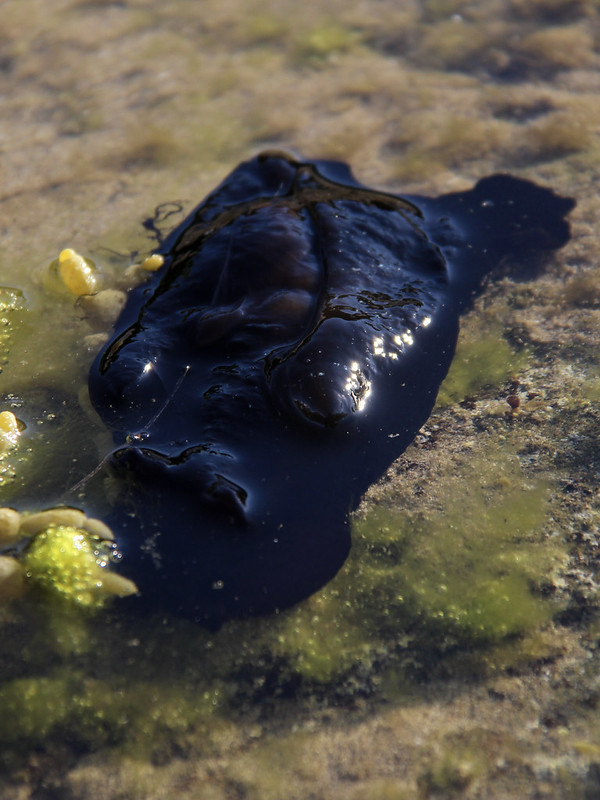 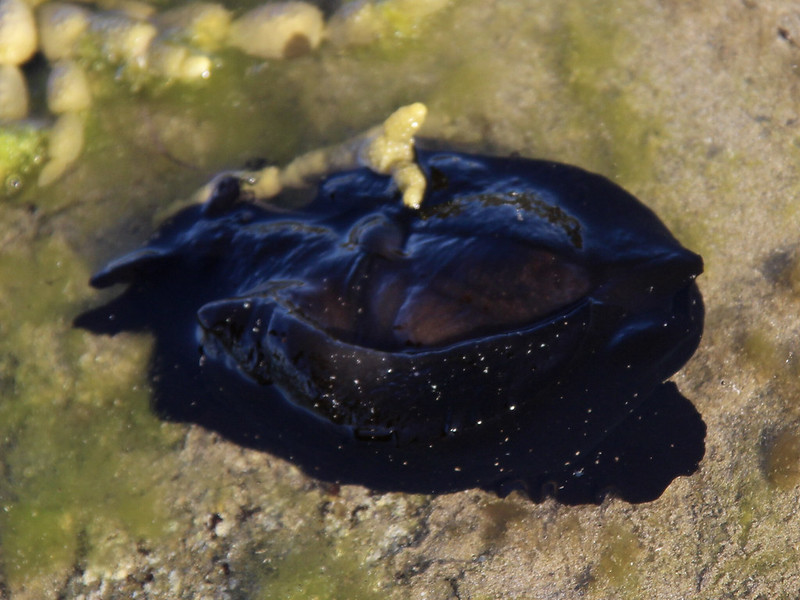 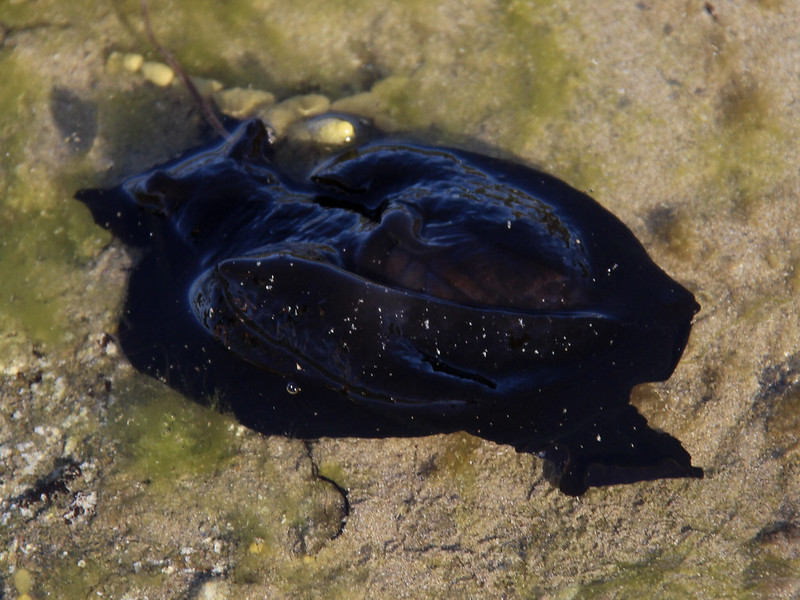 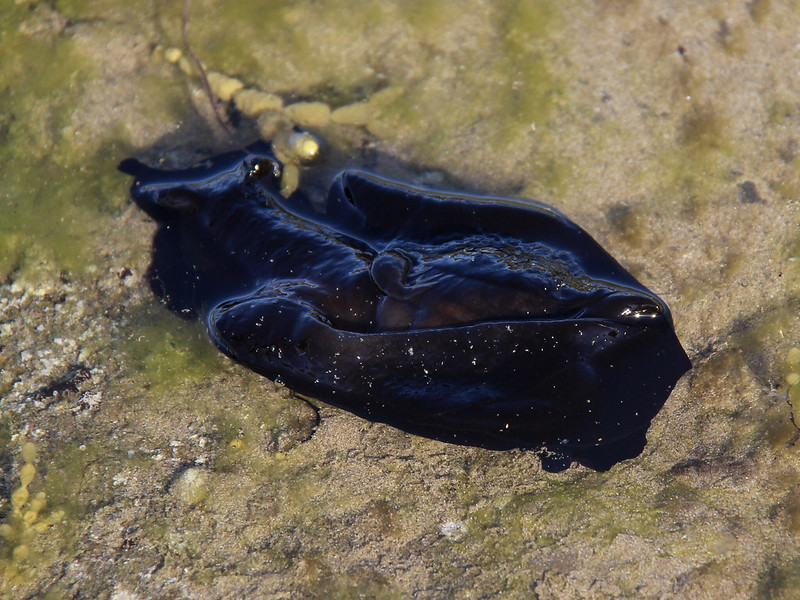 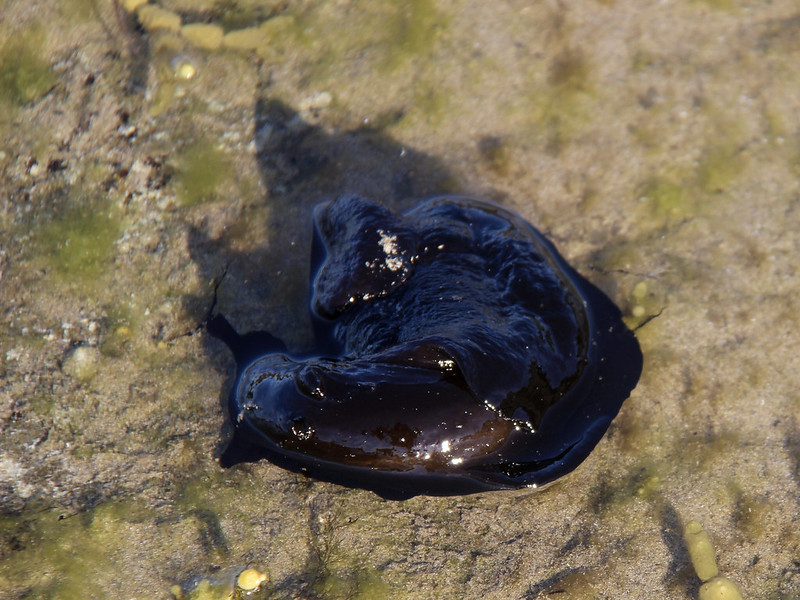 The below species was observed in September, 2017. 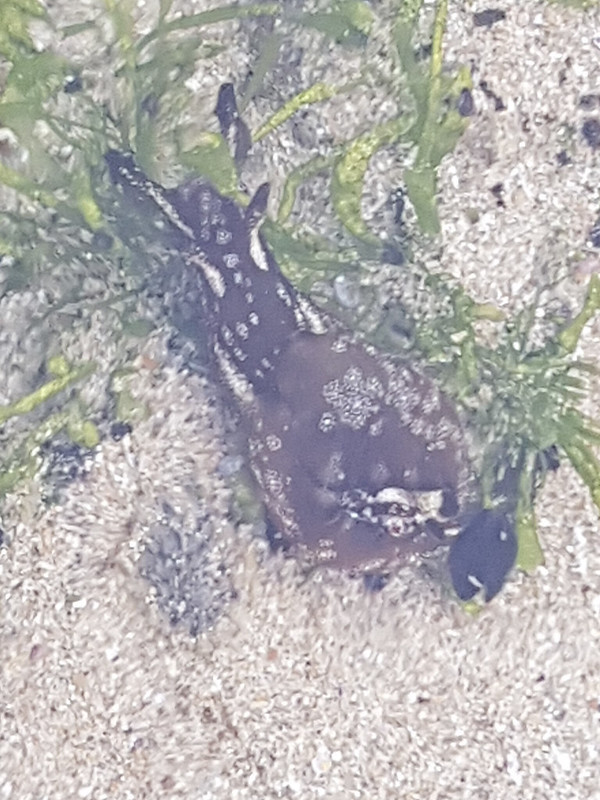 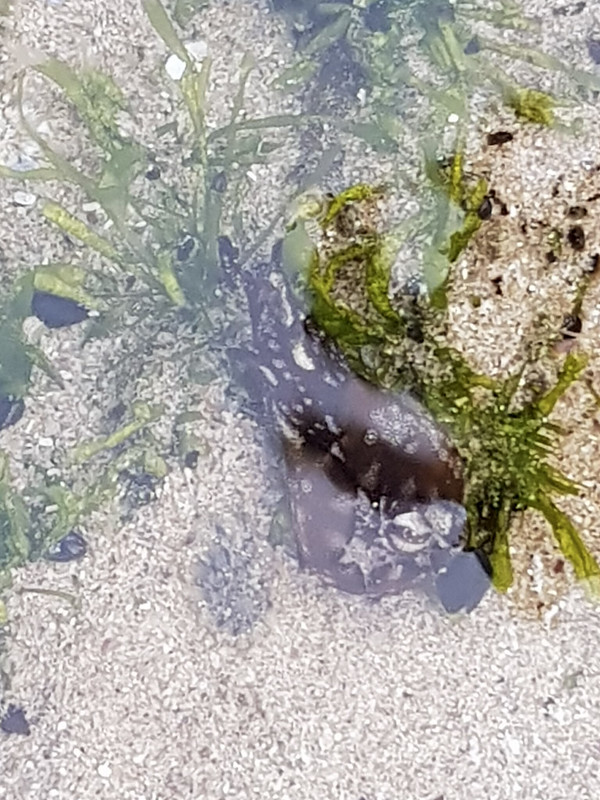 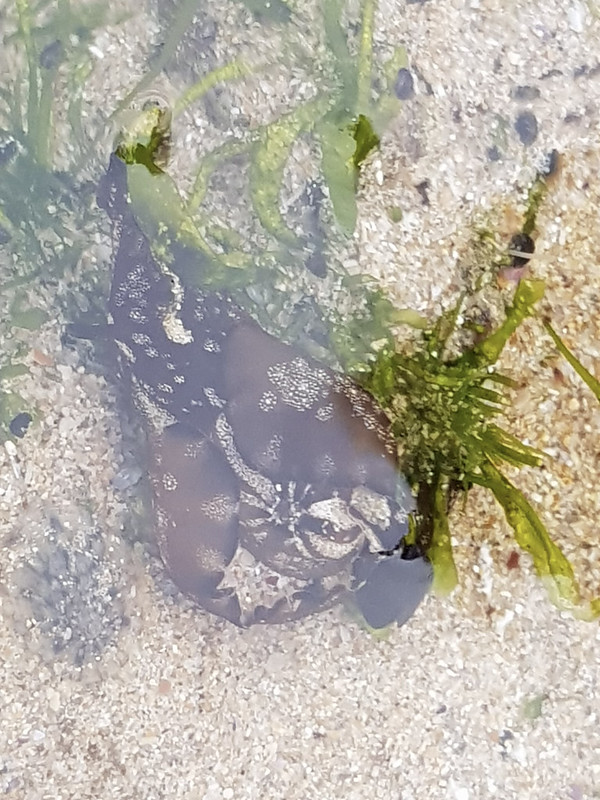 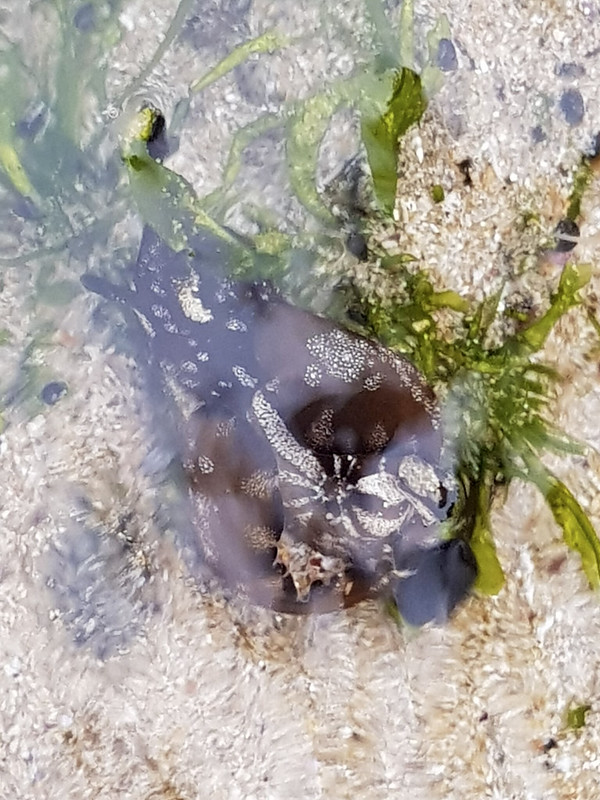 I asked for help and was told:

“The only suggestion I could make is Aplysia juliana but it certainly is not quite like the animals we usually see. It is often dark brown and usually has white dots/spots on the body but I have never seen them arranged in the manner shown in this animal. If it is from Victoria, I think an aberrant A juliana is the most likely option. It does not have the purple ink of A sydneyensis and A parvula has dark edges to the parapodia.”

I know the etiquette is against copying and pasting when it comes to information ID’s. I’m bending the rules in this case as I want to document more creatures around Apollo Bay. I want to know what to look for and document should there be multiple sea hares with patterning such as this.

It was our second day in Apollo Bay. We had arrived around dinnertime the night before so hadn’t gotten in our harbour fix. Mum and I were both distracted photographing the undersides of meridiaster gunni, the six armed cushion star.

Seth kept on calling us over to look at this ‘sludge’ he found but we were putting him off. “It’s moving!”

Curious, we both walked over. And found this. 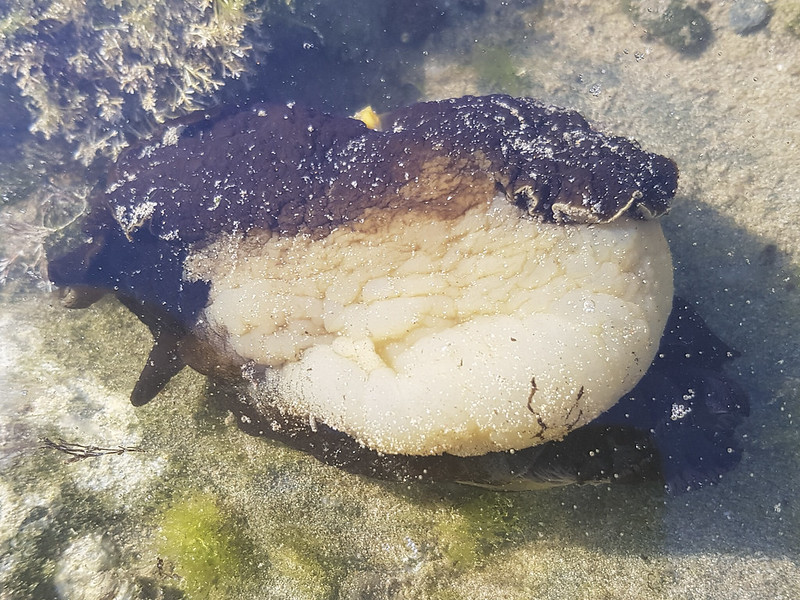 I had no idea what it was but had a hunch that it was a sea hare. I’d only had a brief look at the books mum had borrowed from me six months ago, so don’t know how I guessed it. I think all of the work I’ve been doing trying to identify animals is sinking in!

I put it on a Facebook group that helps with identification of marine life in Victoria. 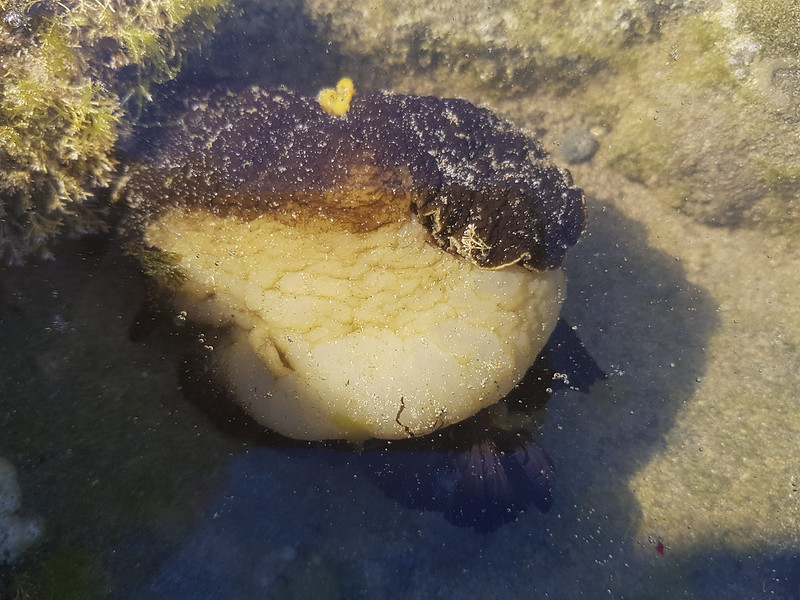 I was right that is was a seahare:

As it inked it wont be Aplsyia juliana, and it is smooth so its not Bursatella,

and its too big to be A. parvula. That leaves Aplysia argus (was A. dactylomela), A. sydneyensis, and A. sowerbyi. Closer photos of any body pattern within the dark colour may give us a clue. A. sydneyensis can be identifed by the pattern around its mantle foramen, but that is a complicated thing to find.

It was one of those times where I was glad I had been working with Seth on observing key details. I never saw it change colour, nor it releasing ink.

I’ve been doing some googling and I think that the mantle foramen is an opening that allows you to see an internal shell. I didn’t even know they had a shell! There is an image on Australian Museum that I think displays it. The yellow strings we see in the below image is it spawning. 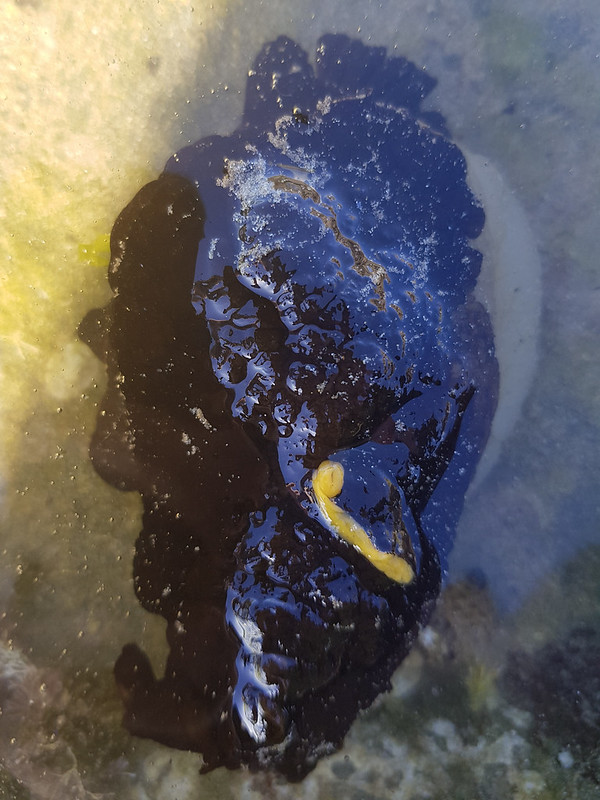 The image below shows the spawn. One of those moments where a mystery is solved by accident. 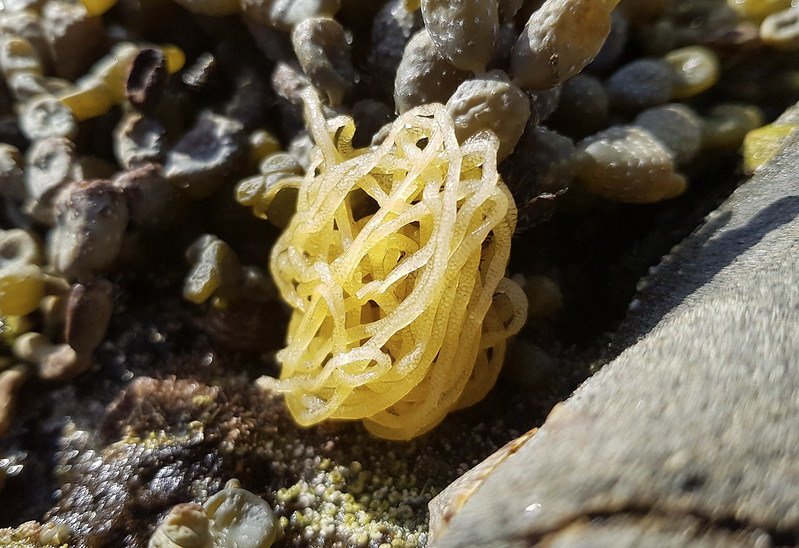 Unfortunately, the rest of the news wasn’t good:

In two images, you can see to the right of the animal what appears to be its gills (looks like red cabbage). It is very uncommon for a sea hare to evert them out of its mantle cavity unless it is very stressed, so I would suggest that this animal is senescent (dying).

I uploaded some more pictures and was told:

looking more closely at this picture I think the white part is the right side parapodial flap which has lost much of its colour. This is a clear sign of senescence and a moribund state.

🙁 That sucked, but the person who helped us told is it was already dying when we found it. Cest la vie, especially in a busy harbour. 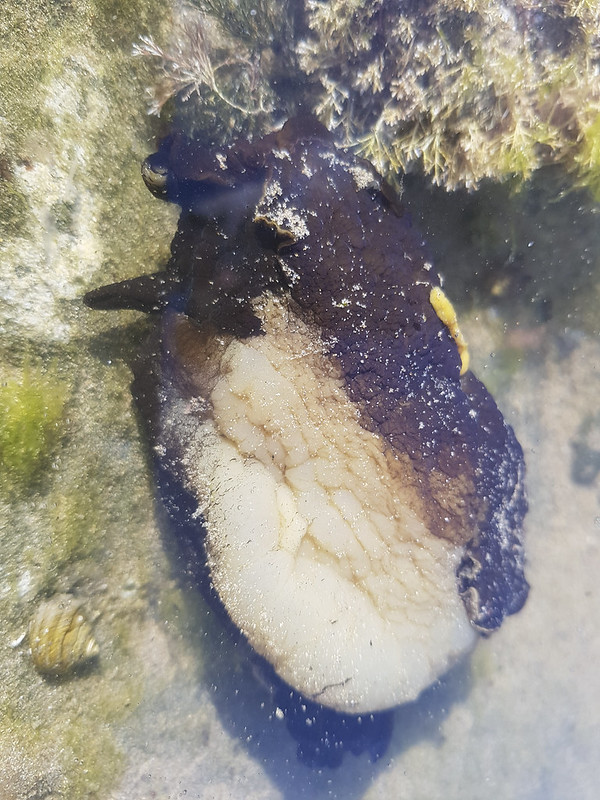 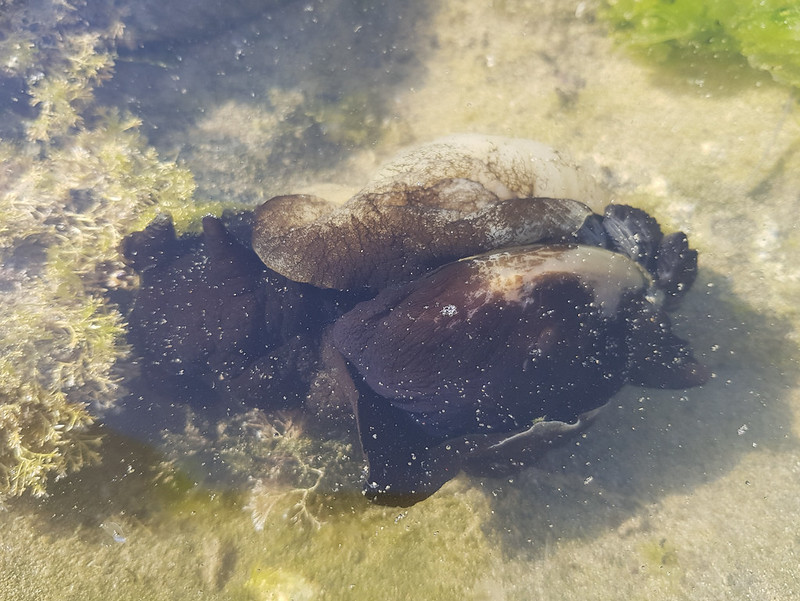 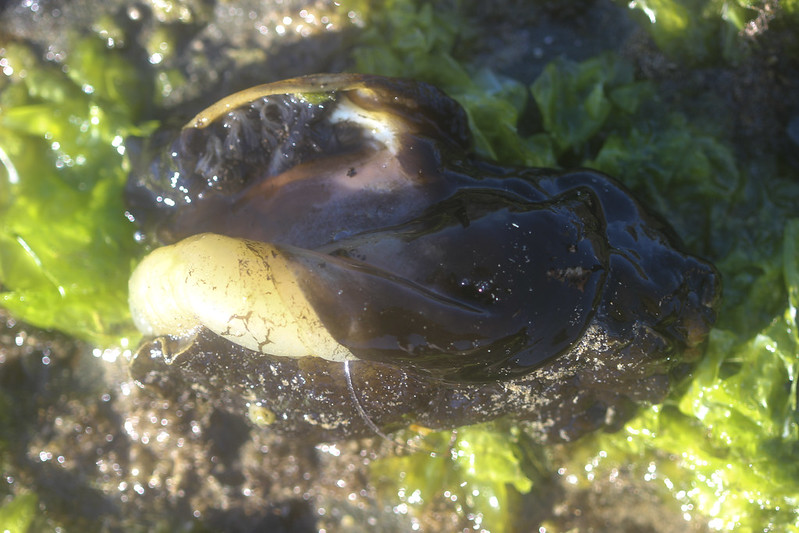 It was an interesting learning experience. I’m hearing more reports of sea hares showing up at various locations along the Victorian coast. It is something I will keep an eye out for on future adventures.