Last Sunday, Sethy and I went to Balyang after our visit to Eastern Beach. The main goal of the trip was to see if there was enough interesting behaviour to justify Glenn travelling an hour to photograph birds. I quickly learned that no, there wasn’t. The nesting behaviour I saw last time was a fluke and we would be better off going to an environment with a larger concentration of birds. Seth and I still had fun, though 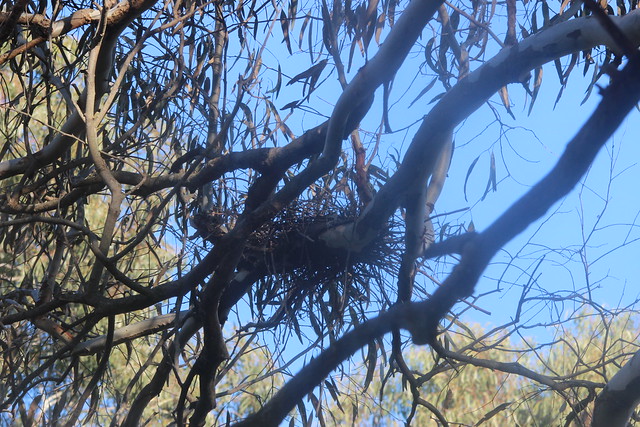 This is what remains from the heron nest from last year. I do want to return and see if a heron nests here this season. 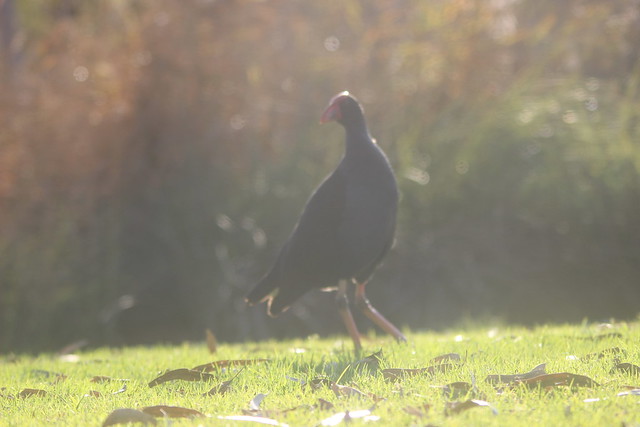 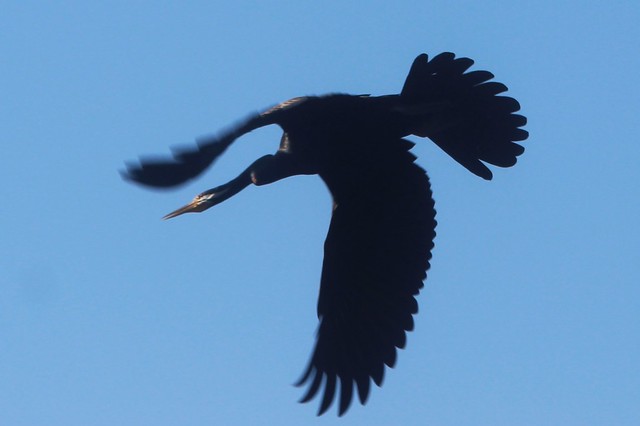 Cute darter flying away. The following images are all of pardalotes. Sethy found these in a tree, based on the last visit. Last time, I took a photo of a little bird in a tree and dismissed it as a thornbill. It was dark, rainy and I didn’t really care. Later, I looked at the photos and lightened the image. Sethy and I worked out that we had actually seen a spotted pardalote, which was a lifer for him. The main difference, for us, was the tail was shorter. He was so stoked. It really made me think about how many birds I had dismissed in the past that may had been something else. I didn’t really care about them before but these guys changed me mind. They were quite low down and easy to see. They let us get really close views from all angles. I think they were eating the leaves of something on the leaves. Possibly lerps? 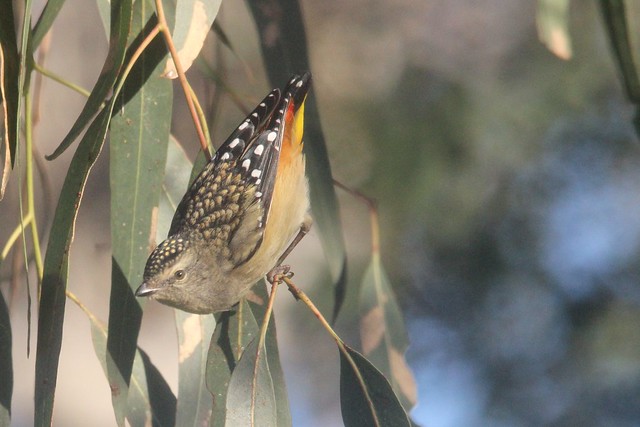 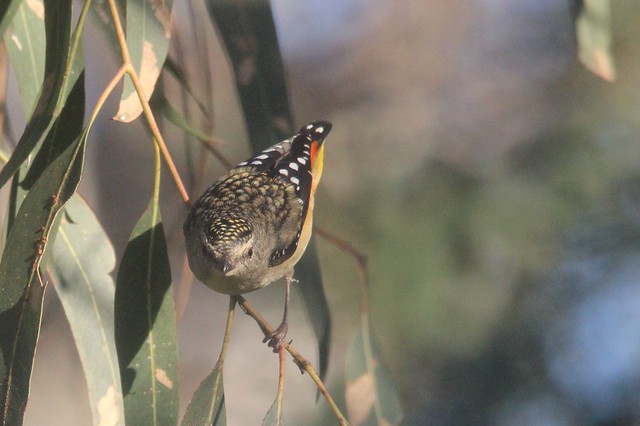 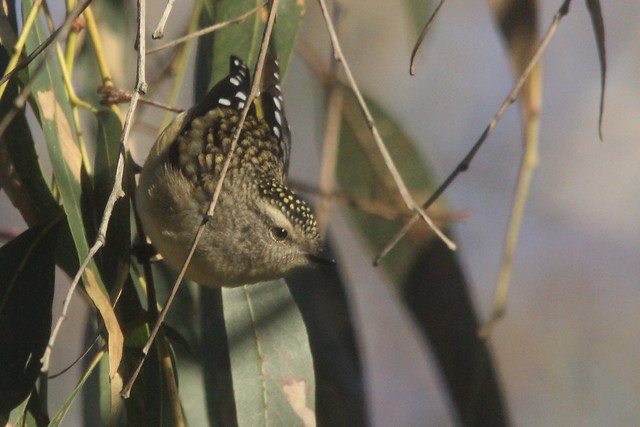 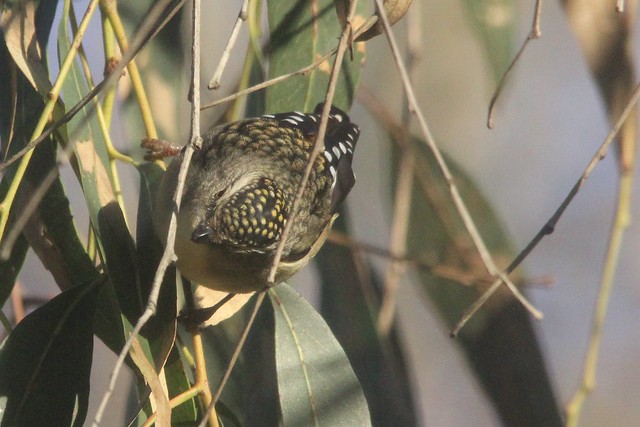 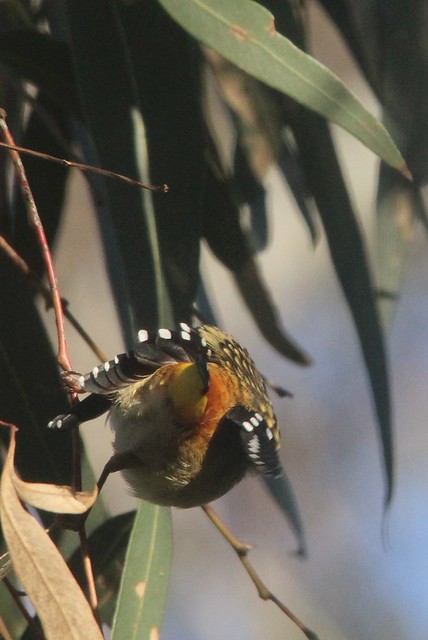 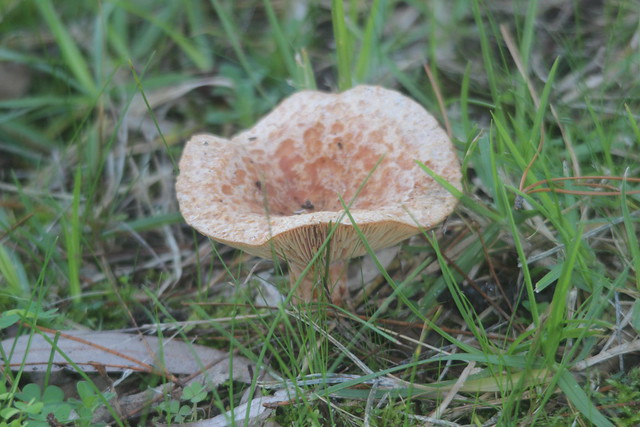 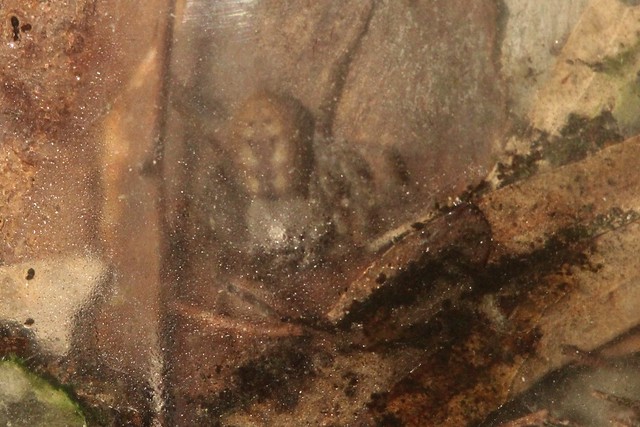 Spider underneath a possum guard.

I don’t know how often pardalotes are at Balyang. It could be seasonal. Or, they could be in the lower branches because it’s nearly nesting time. It’s certainly something to research. I’ve never noticed them before because they aren’t as visible as some of the other birds.

All the ducks there at the moment are boring. Oh! And there was wedding photography being done here during our visit. There may have been a dog wearing the top half of a tuxedo.

This trip took place on 6 july

I’m a little bit late in writing this post. It has been a busy couple of weeks and I still don’t have the internet connected here yet! I’m hijacking the internet connection via Glenns phone at the moment, so all the posts from today will be a tad rushed.

I had spent the weekend at mums. I’d promised Sethy and adventure but the weather had been bad, plus I wanted to get back to the house in time to look for owls with Carolyn. I told Sethy we’d go down there on the Monday. It turned out, we got there just in time for some decent rain. It was still a blast though.

You see, we observed some nesting behaviour from the crows and the cockatoos. The cockatoos were flying from hollow to hollow. They were biting off bits of back around the hollow and then scooping up and chucking out the shavings. Two rainbow lorikeets ended up scaring them away from here so I don’t know if they will use this hollow.

The other behaviour was the crows collecting twigs for their nest. Two of them were doing it. They would break sticks off trees and find ones on the ground. Break them up into smaller pieces to make the nest. I don’t know if they ended up using any stuff from the herons nest from last year.

Below are the relevant photos, as well as pictures of a pretty swamphen. Sorry for the lack of explanation, I will be doing more research about nests. 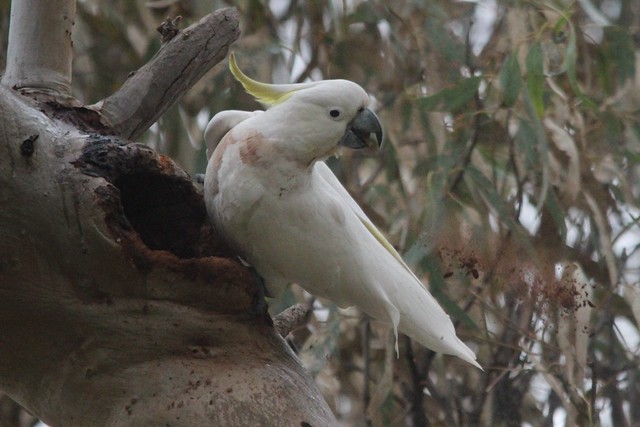 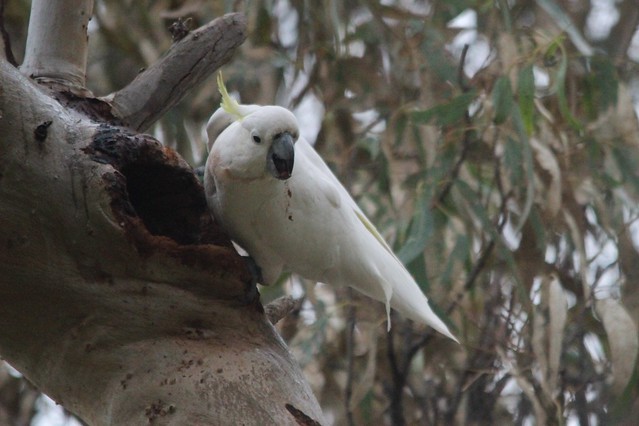 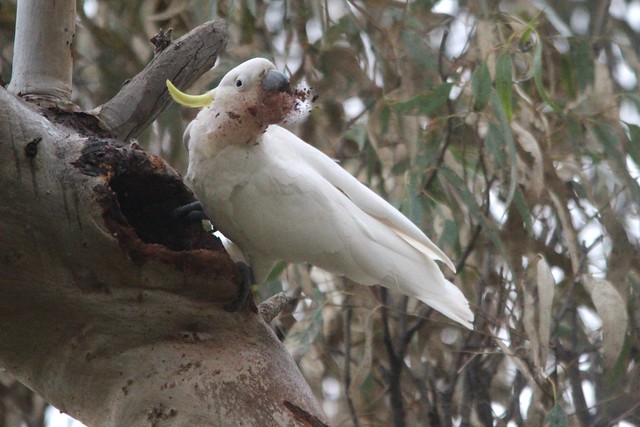 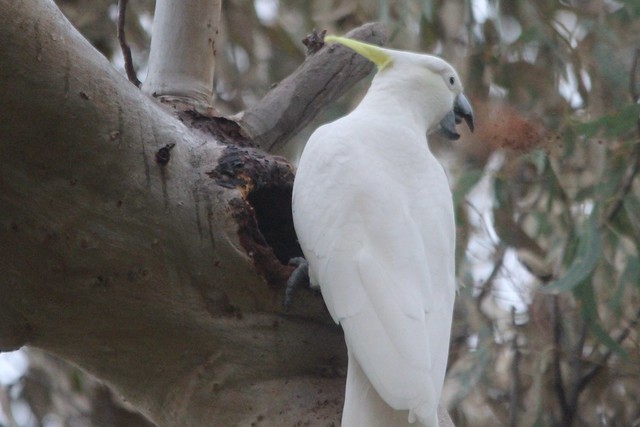 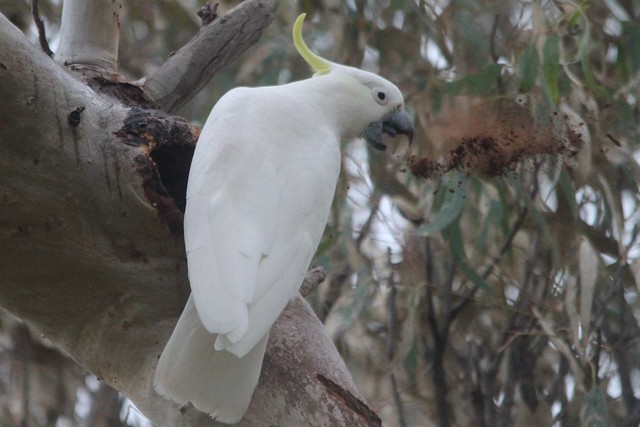 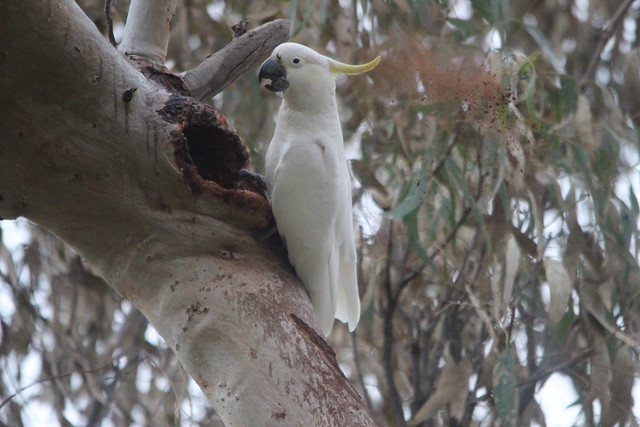 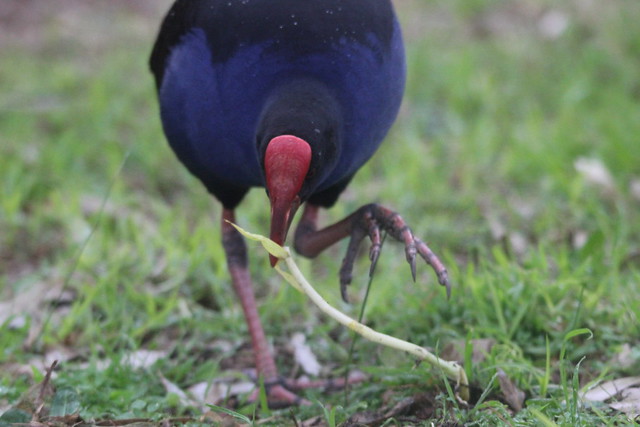 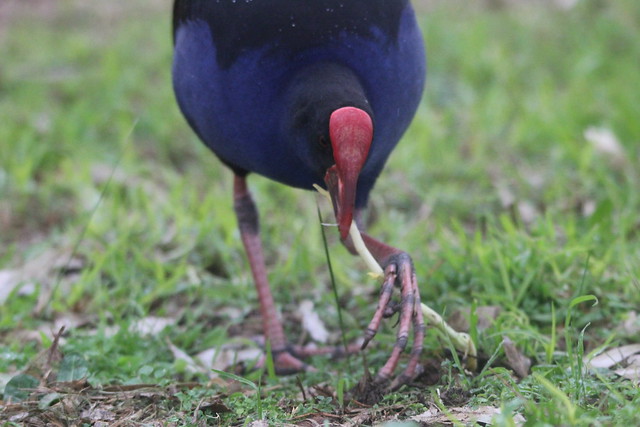 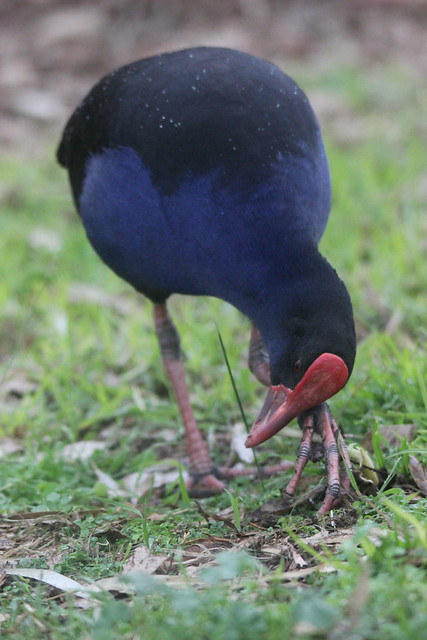 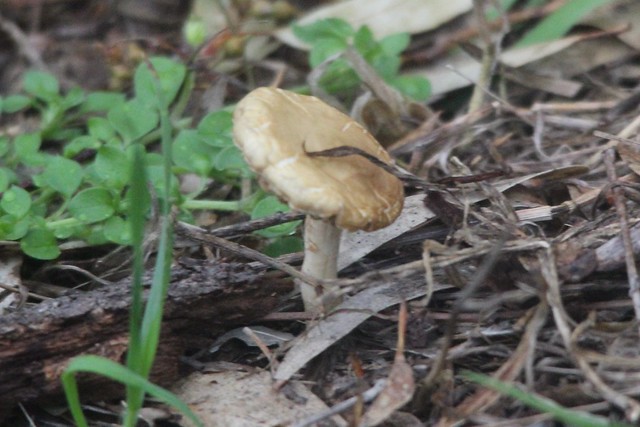 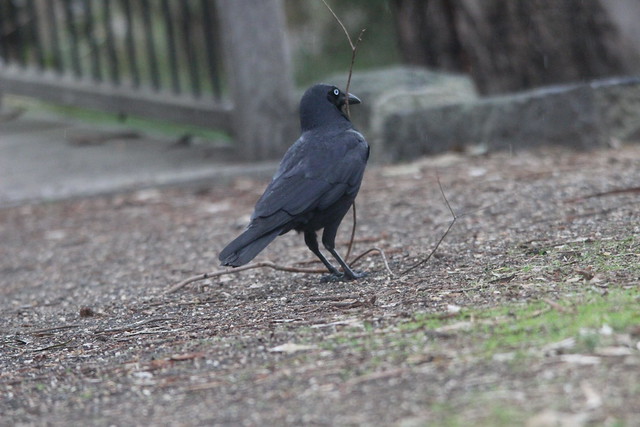 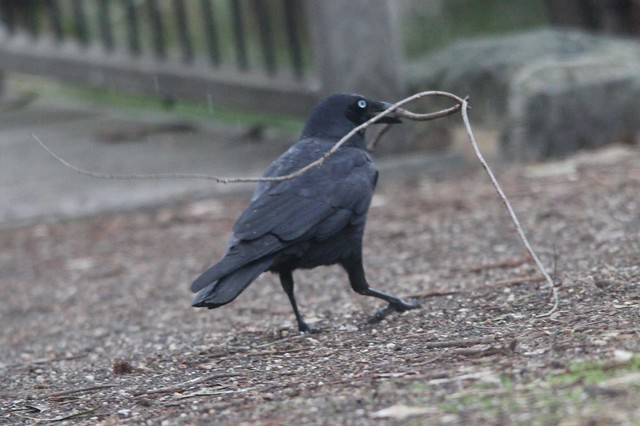 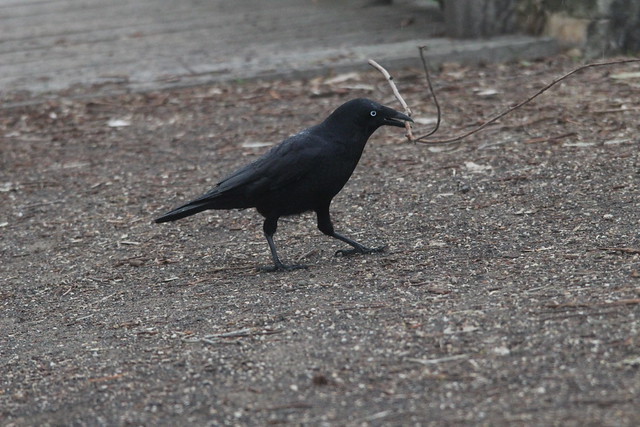 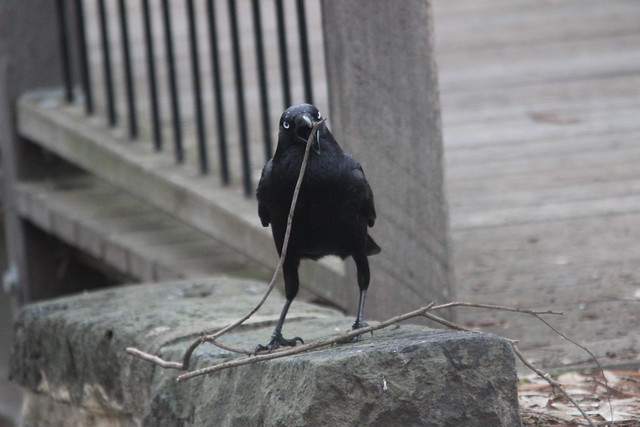 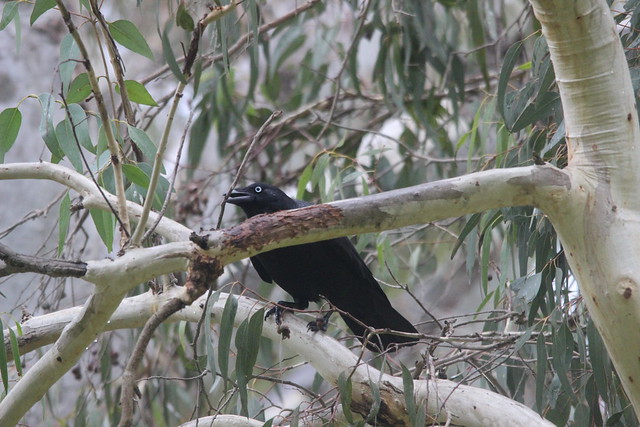 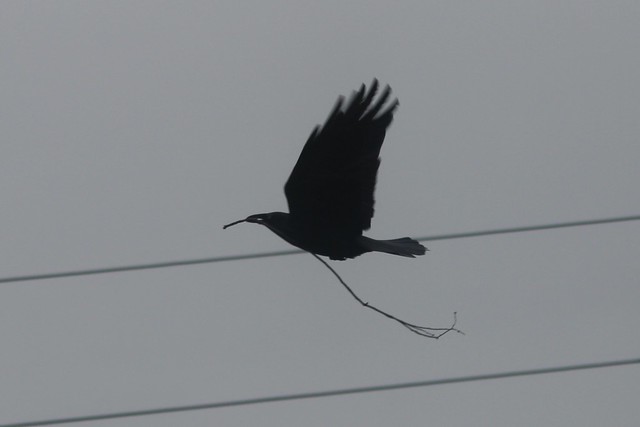 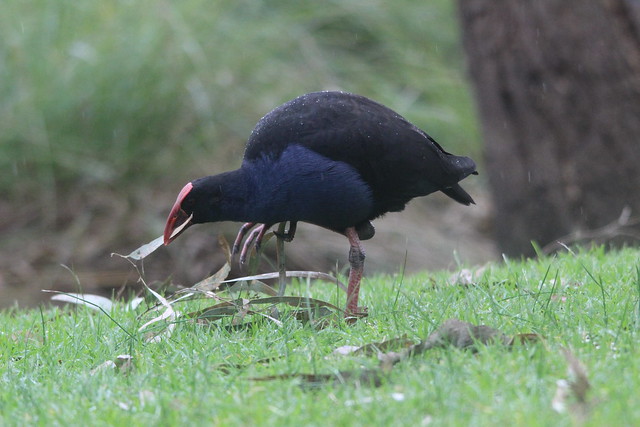 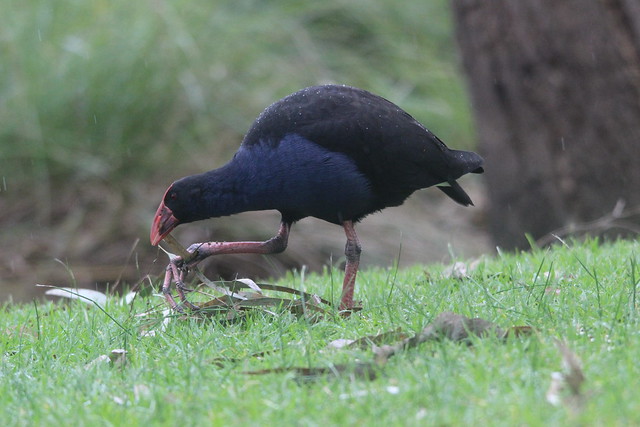 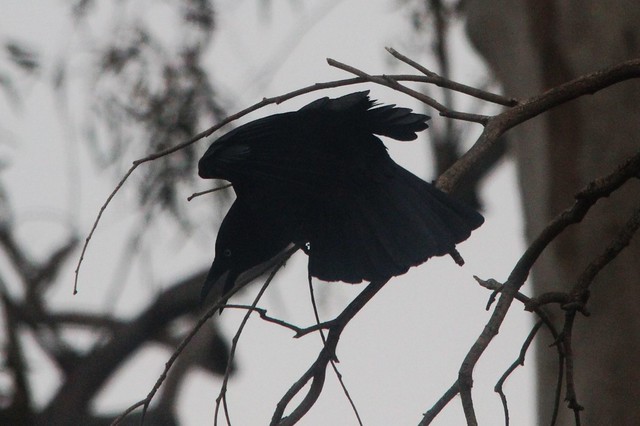 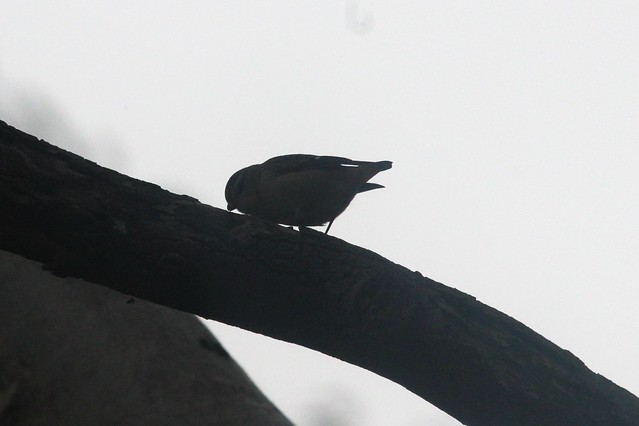