‘Twas a couple of nights before Christmas. News had arrived that two MORE vagrants were seen at Lake Tutchewop. A  red-necked phalarope and oriental plover had been sighted, in addition to the much reported dowitcher. People were planning their trips for after Christmas, hoping the birds would stick around.

I was fortunate enough to visit the Kerang area on the 27th though, accompanying Owen Lishmund and Tim N. It was a brilliant days birding and one that makes me keen to explore more areas of Victoria.

The alarm went off at 4.20. I was at the train station and 4.55 and at Footscray Station waiting to be picked up at 5.20. I wasn’t lucid at that hour, but it was surprising to realize that I was the oldest one in our group.

We got to Kerang around 9ish. It was surprising to see how many raptors where there! Owen was looking at the window and just saying various names. I scored a new bird, the black falcon, pretty quickly.

We got to the much hyped Lake Tutchewop. This is what greeted us. 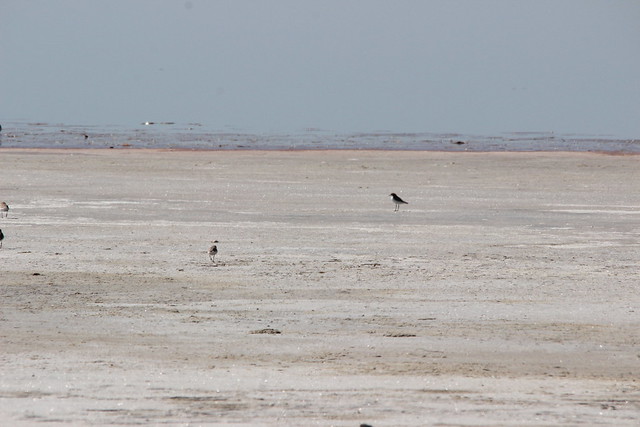 Red capped plovers. And didn’t have to fall into a river to see them!

It was at this point that I realized I probably wouldn’t see the vagrants. Many people were there and we all saw the same birds: sandpipers, one banded stilt, one avocet and a bunch of pelicans. 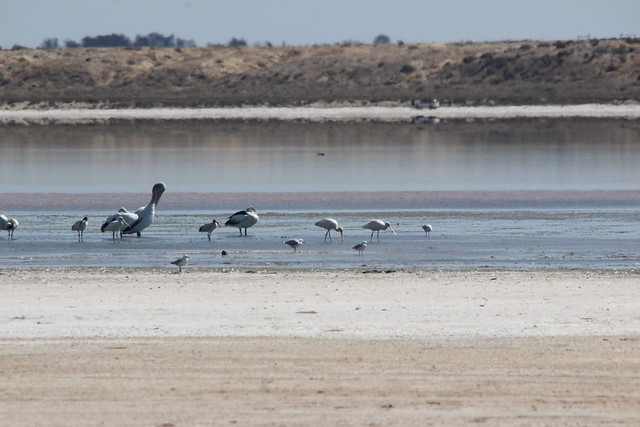 We visited both sides of the lake. It is an area I’d like to return to do some photography. The guys suggested that we return later in the day when the waders were more likely to be active and do some other birding in the meantime.

As we were leaving, they heard the sound of a white winged fairy wren. Shame I didn’t get to see a male, but I still got a blurry photo of a female. 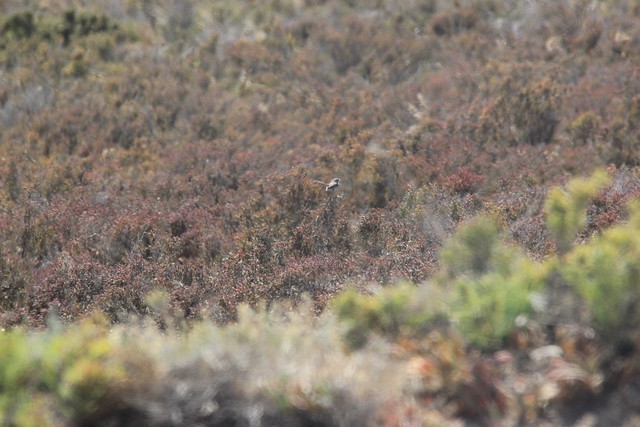 Also got a clear shot of a black kite. The markings are different to what I expected. I’m hoping that I’ll be as good as others with raptors soon enough. 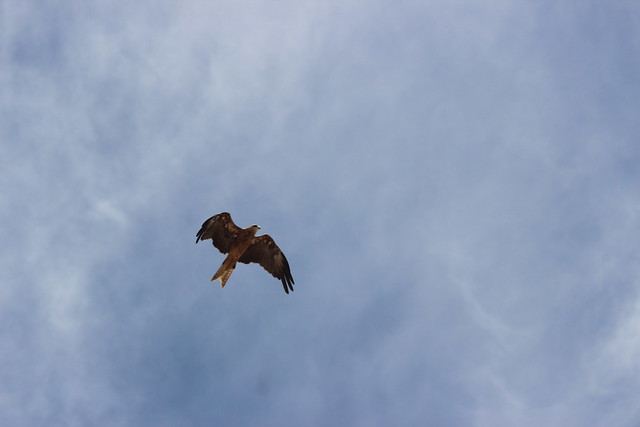 We went to Tresco West specifically to find the blue bonnets, because I’d mentioned my fascination with parrots. I felt a bit guilty about doing a detour just for my interests, I don’t want to be the newbie that annoys others. I know other birders are awesome and love sharing but I still struggle with the social nuances of group birding.

We heard the blue bonnet early on. The were very skittish though and I’d only get glimpses of them flying off whenever we got too close (which was still a comfortable 5-10 metres way.) They are apparently the shyest parrots. The subspecies we saw was apparently Northiella haematogaster haematogaster – commonly known as the yellow-vented bluebonnet. Apparently located in multiple places along North Central Victoria.

I’m defintely returning to spend half a day – at least – just to watch the blue bonnets. The reserve deserves much more exploring. 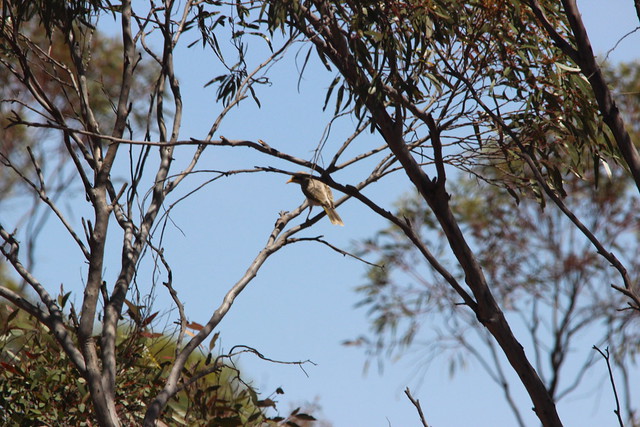 Was also fortunate enough to see a yellow throated miner, something I’d placed on my bucketlist for the day. There are five subspecies of this, although on the east coast it’s primarily race flavigula. One of the races is called a dusky minor – apparently can also be confused with noisy miner. It means I only have one species of miner to find – the black eared miner. This was previously a race of the yellow throated. This is why I keep an eye on subspecies.

Apparently Goschen was bad this time of year, so it was decided that we would cross the border to see a feral population of ostriches. Only I didn’t realize we had crossed the border until I saw signs saying NSW. 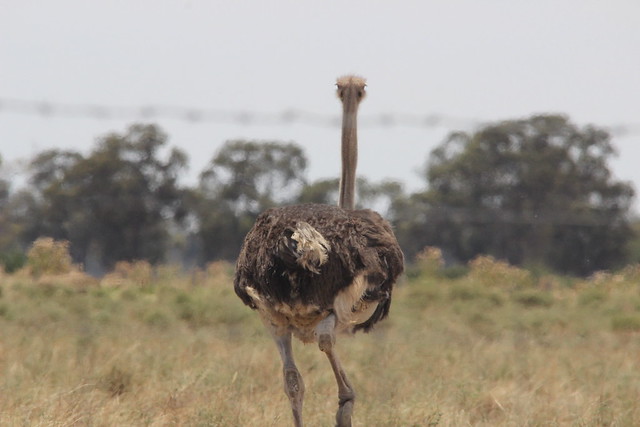 Part of me doesn’t see the point in seeking out feral populations just to add them to the list. Lists in general bore me (like state lists, year lists.) I guess I’ll grow into the ideas. I’m too lazy, I think, I prefer just sitting and watching the species that fascinate me. I like adding birds to my list because I then have the context to learn about them. And, I suspect in 20+ years I’ll regret not ticking some species.

If you want more info, both Kay Parkin and Tim Dolby have written about them. Apparently they do disgusting poops.

This area was amazing, along with the adjoining bushland. We didn’t see any curlews but one of the first birds I saw was a rainbow bee eater. 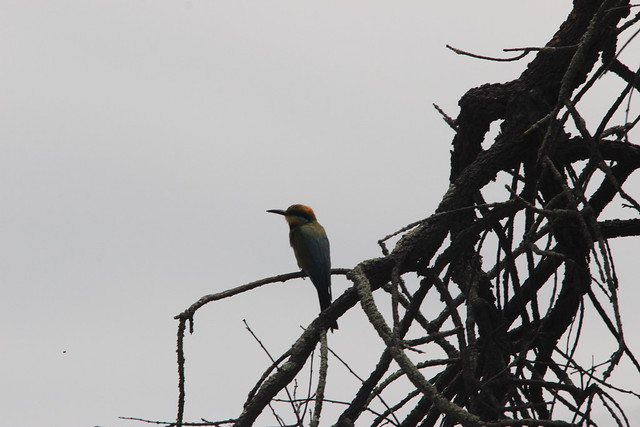 I’ve been wanting to see bee eaters in the wild for some time now. You can get them at the you yangs but I haven’t visited there properly in ages. The colours are beautiful and they are even more magnificent in flight. They were definitely a highlight of the day for me.

We were all wandering about, following the various calls, when Owen shouted at us to come over. 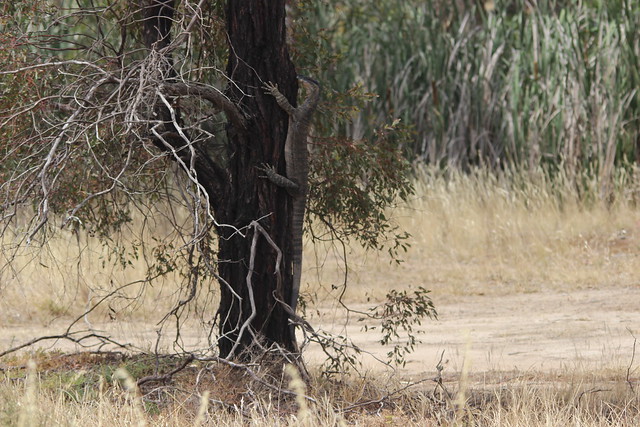 I was expecting to see a bird but no, it was JUST A LACE MONITOR HANGING OUT IN A TREE! *This* is why I need to leave my suburban birding spots and start going into outback/rural areas. I love seeing other animals. Developing a fascinating with lizards. 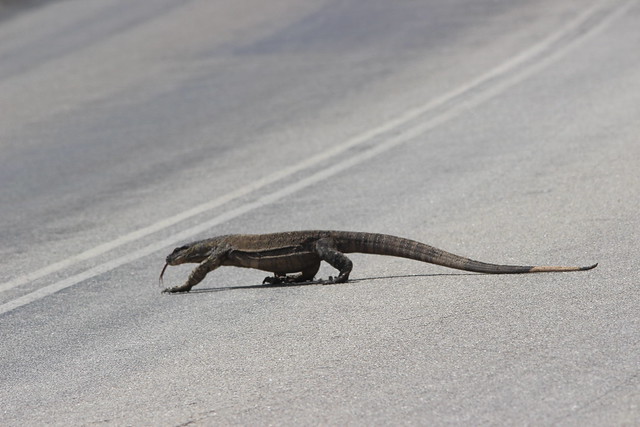 Very, very thankful the little guy made it across the road safely.

Was also a number of kangaroos in the area. 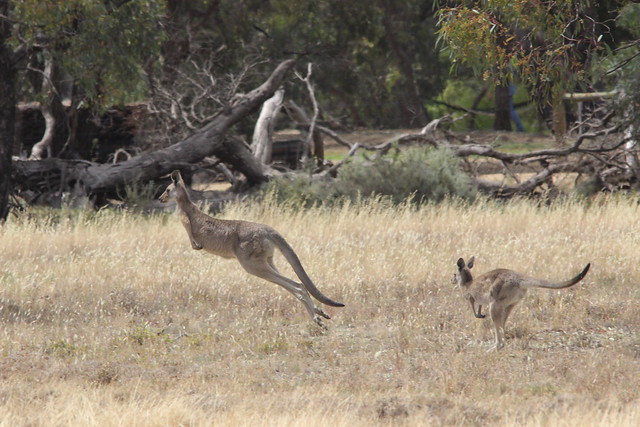 At some point, I saw this juv blue faced honeyeater. I have now seen them in three different states. 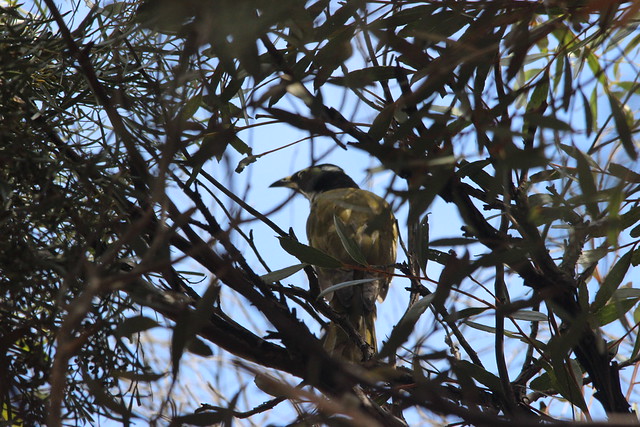 We returned to a group of people who had been looking there for a while. No luck. I was knackered at this point, and the sun was really beating down. I decide to just sit down and get photos of both chats and plovers. I do love mucking around with photography but only when it doesn’t interfere with other peoples plans. 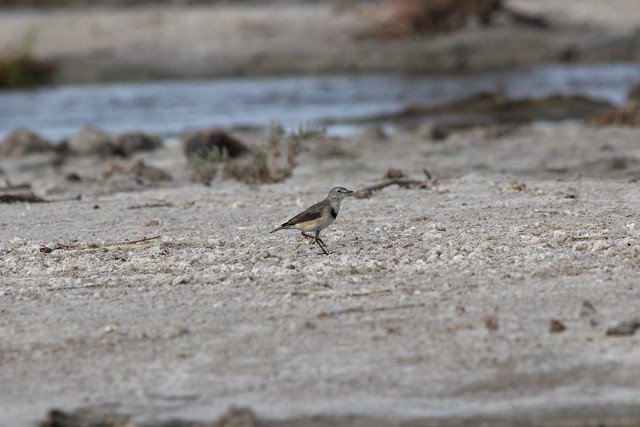 This chat has different colours – am assuming it’s a juvenile. There were crimson chats in the area but apparently the bad on this bird is different? 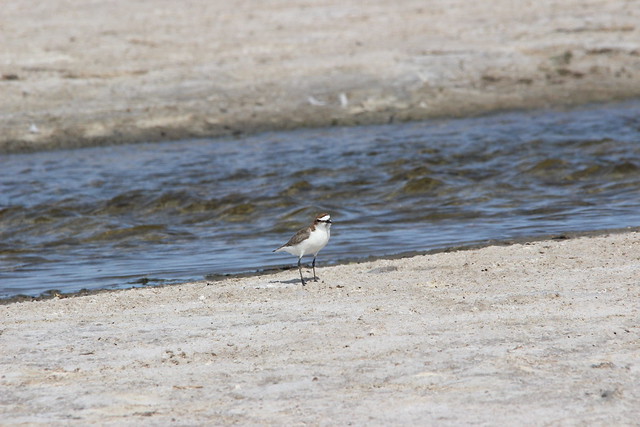 Was nice to get a shot of a plover that wasn’t running away from me. 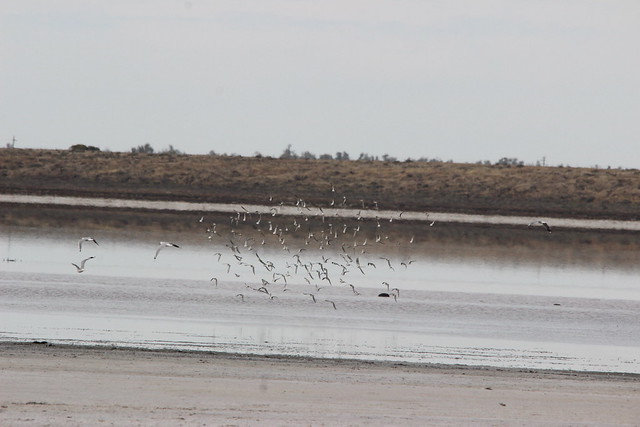 Town and Back Swamp

It was decided that we should head to this swamp. I was knackered and didn’t expect much, I was happy to along with anything. For me, it was one of the highlights.

We did a loop around the swamp, taking note of any interesting birds along the way. 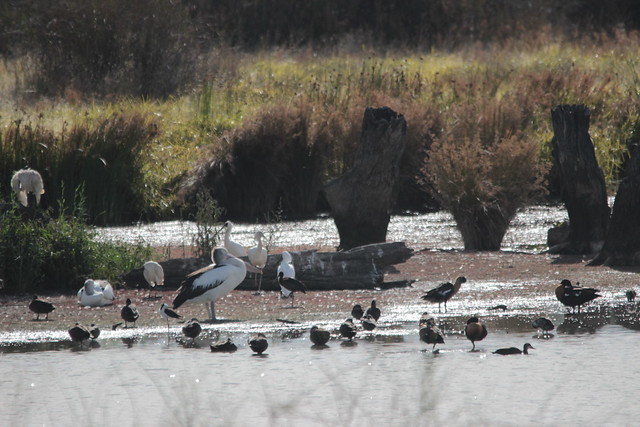 It was very difficult for me to see this glossy ibis, which was one of my target species for the day. It was similar in colour and size to the shelducks (!) that were there. It is smaller then other ibises. I think this will help with identification in the future. 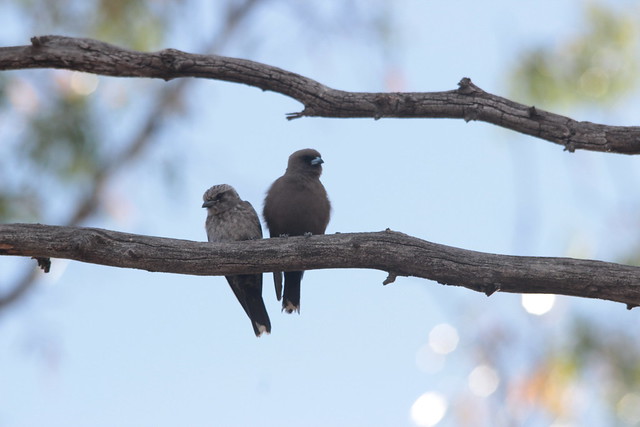 This is a dusky woodswallow. I almost didn’t both taking a photo of it, as I thought I’d seen it (and, I tend not to care about anything at the end of a twitch when I feel exhausted. I’d been active for 14 hours at this point.)

One was a juvenile, which was lovely. The woodswallow I had seen was (duh) masked. There are no subspecies of masked but there are two of dusky. Looks like I have to go to WA! 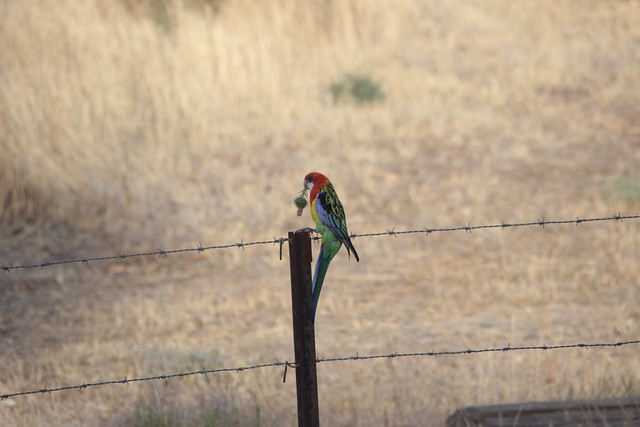 Eastern Rosella. I don’t care how common they are – or if they look like blue bonnets in the shade. I love them, and I especially love photos of birds feeding. 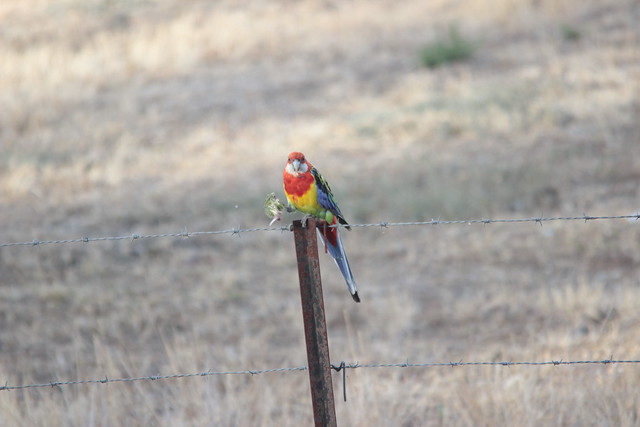 The below is a photo of a variegated fairy wren. We had seen one earlier in the day but not views as clear as this. There are five subspecies. This is race assimilis, the one that you will find across most of Australia. Kinda resembles the blue breasted but this wasn’t in the range. The guys were awesome. They could hear a bird call and then hone in on it, knowing exactly what it was. And they haven’t been birding their whole lives like I assumed. There is hope for me yet! 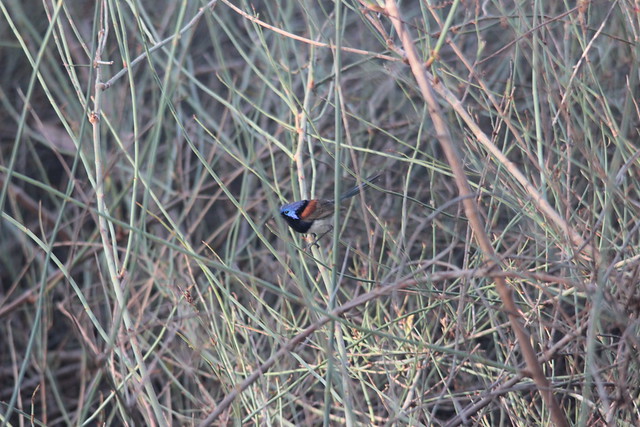 “Theres the brown quail for you, Jade.” Earlier in the day, we were talking about quails and I mentioned the one that had eluded me at Jawbone. We were at the end, walking towards the car, when we saw this. Hope to see more quails and get better views in the future 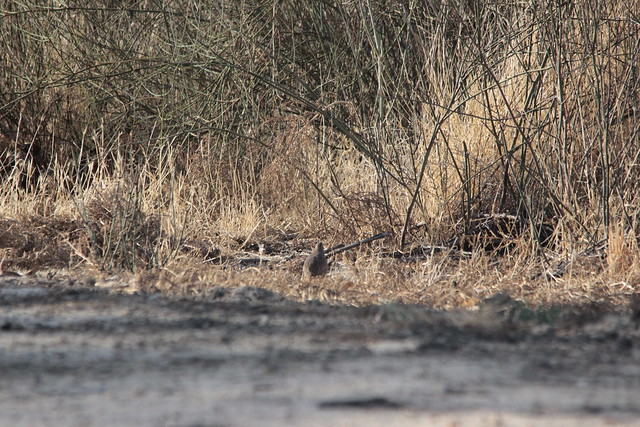 It was a fanastic days birding. I didn’t care about dipping on the big three. There were a number of birds they heard during the day that I would have loved to see. They heard birds and saw things such as little friarbirds. It’s the same with any trip though, I’m so overwhelmed by all the movement and sounds. I think I’ll be like this for quite a while until I get the hang of it. It is a bit of information overwhelm.

Oh! We were driving up there and someone in the car noticed that Kevin Bartram was in a car next to us. That man is a birding legend. I don’t fully understand the story, but apparently he did something similar to Kenn Kaufman by hitching his away across the country when he was 18. I think I met him at some point, but I was exhausted and feeling anti social at that point.

I also met Craig Morley, a prolific birder from Geelong. I see his reports of ebird a lot and had hoped to bump into him one day.

I plan to return to the area in the future – when I can drive – and explore it properly. Not just birding. It was fascinating. I especially want to go to the ibis rookery.