Last week, I decided to go on an impromptu trip with South Bay Eco Adventures. The conditions in Port Phillip Bay had been fantastic for wildlife lately and they had posted on Facebook about a pop up explorer tour. Armed with a $100 voucher (courtesy of my parents and Santa), I jumped at the opportunity. The voucher meant that I’d only be $20 out of pocket and it would be one of the last opportunities to get out on the bay before many businesses close for the winter.

It was one of the best trips I’ve gone on. It was phenomenal. Great weather, great wildlife and great team. 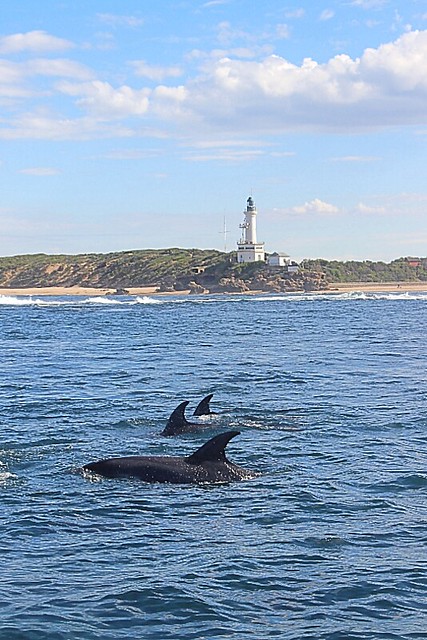 The explorer tour is a 2 1/2 hour tour exploring both inside and outside of Port Phillip Bay. I had been eyeing off their discovery tour, because of the gannet colony at Popes Eye, but decided on this because it is no longer offered as a regular tour. Going outside the bay meant there was more potential for new birds and mammals. I’d only added about 5 birds to my life list in the past year, and only one to my mammal.

I also wanted to suss out Port Nepean without having to catch a ferry. 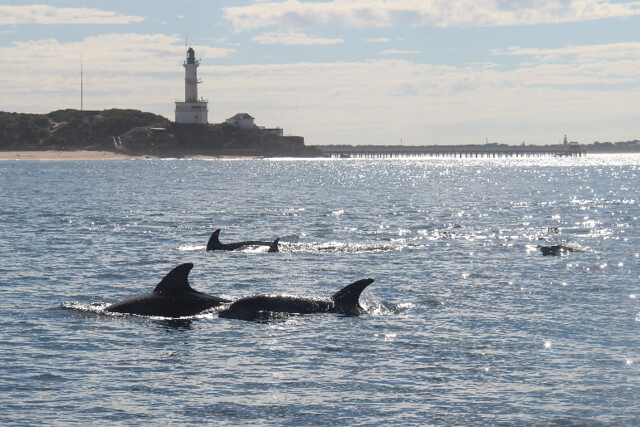 We came across a pod of Burrunan dolphins shortly after leaving the harbour. I’d come across these dolphins a couple of times in Corio Bay, but this was always one dolphin and it was a fair way out. Here, some of them swum very close to the boat. We were able to get good views of the adults and their young. I learned that the young have a special technique to suckle the milk of the mother without getting sea water in their mouth. They do this by rolling their tongue.

The above photo isn’t of these dolphins, as I was struggling to get good photos at this point. The light was definitely working against us. However so many were jumping out of the water. There were so many, it was brilliant. 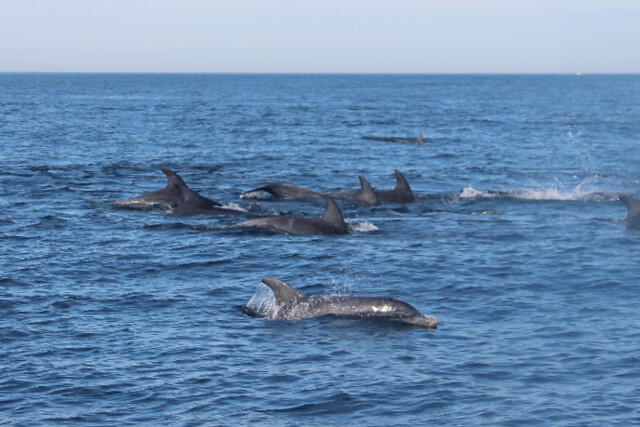 We went out of the bay and quickly come across another active pod of dolphins. The staff initially thought they were male burrunan but then decided they were regular bottlenose. Decision points included size and how worn the dorsal fins were. I’m not knowledgeable enough to say that we definitely saw any, so am deferring to their knowledge and counting it towards my mammal life list.

I loved it. They too were jumping a lot. Due to the distance though my photos were mediocre. 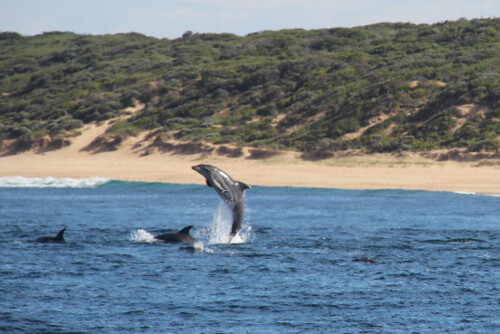 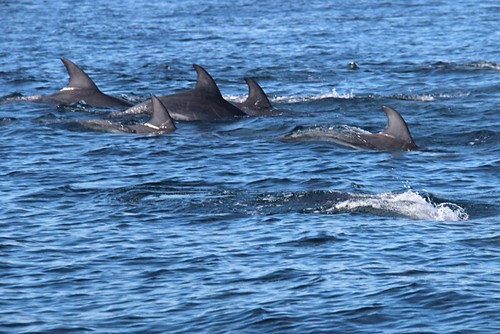 Mike (the skipper) is well connected with other boats in the harbour and had gotten reports of where a pod of common dolphins were. After spending time with the bottlenose, we ventured out. I loved this part. Outside of the bay, the water was a bit rougher. There was a decent swell and I loved the feeling of the boat going up and down on the open ocean.

Recently, I’ve been trialing new anxiety medication. I’d been on it for 6 months and the nausea had been horrible. Even long car trips made me uneasy. I had stopped that medication about 3 weeks earlier and was feeling fantastic. It was so refreshing to be out, exploring the open ocean, without having to worry about nausea. I even stood up and held on while the boat was moving (at slower speeds) and just felt so free.

It’s a silly feeling, but I’d barely left the house in the past year. It felt so awesome to be back to normal. 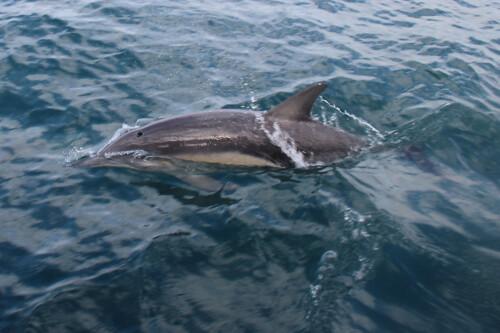 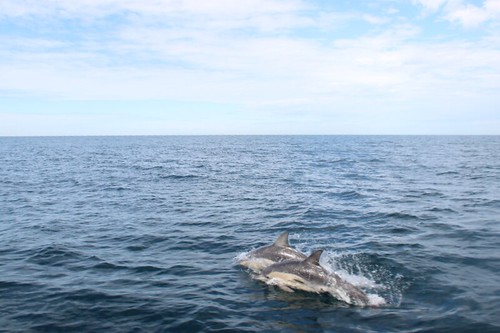 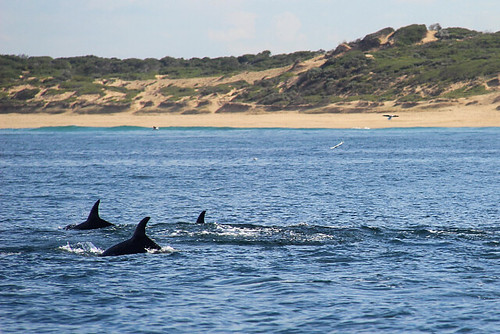 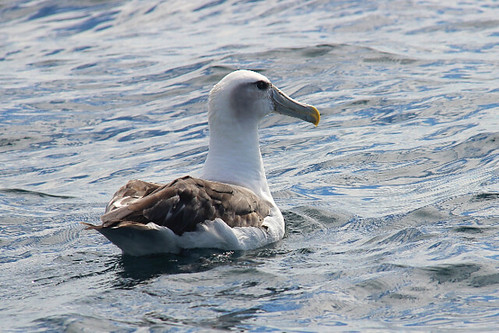 At one point during the tour we came across this shy albatross. It was identified as black browed on the day and I got excited, as that would have been a lifer.

I checked my bird books and doubled checked with a Facebook group when at home and it is definitely a shy. At no point does a black browed have a yellow tip at the end of its nose. I’m not judging the tour company as bird identification can be quite the bitch at times. I was just hoping to see some new seabirds without doing a pelagic – pelagics have a much higher rate of sea sickness! 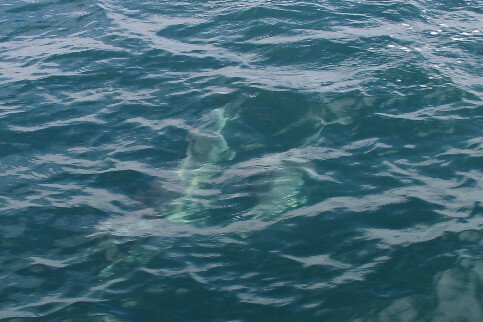 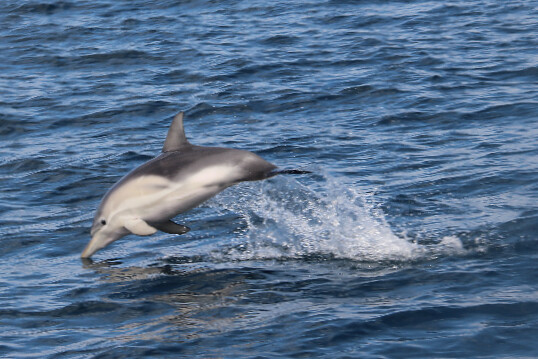 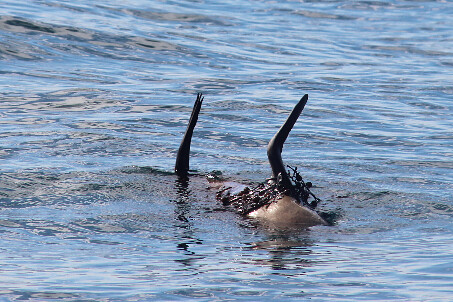 Heading back inside the bay,  we also saw this sea lion just hanging upside down. It felt like the perfect finale.

It was a brilliant trip. Over the past year, I’ve noticed that I’m becoming more interested in the ocean then I am by birdwatching. I still love birds, but tend to obsess over specific environments or species. The ocean is so vast and has so many unknowns.

I had to push all nature hobbies aside while I was sick, so this reminded me just how much I want to learn about the marine environment. I’m obsessed with learning as much as I can about Port Phillip Bay. It’s just the budget that is limiting me.

I’m keen to return to explore the gannet colony and mud islands, when the budget allows. Also keen to learn more about the burrunan dolphin popular at Gippsland Lakes.

If your in the region, I highly recommend it.

Small and isolated dolphin populations are under threat