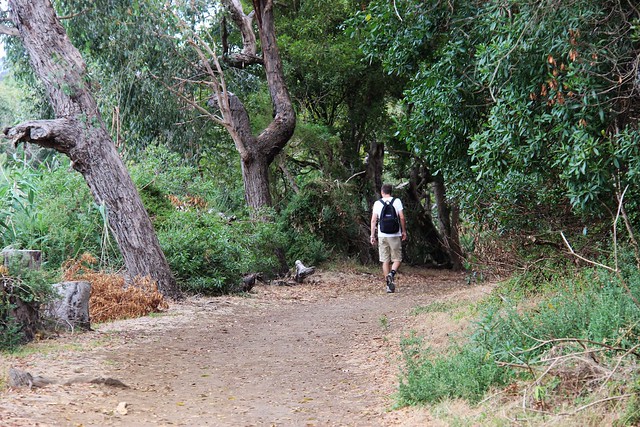 This walk was the culmination of a beautiful week in South West Victoria. I’d just spent five days with my family in Apollo Bay, and observed the Point Danger Gannet colony in Portland. I’d explored both ends of the Great Ocean Road – a region I am very much in love with. My birdwatching friends and I had visited Killarny Beach near Warrnambool, where I had seen a wild ruddy turnstone. He decided that our final adventure for the day would be a quick visit to Tower Hill. Now, I’ve been obsessed with the south west region for over a decade. I haven’t explored much beyond Apollo Bay but I had a very long bucket list of activities to do when my anxiety allowed for it. Tower Hill was right up there. It’s history is so fascinating. 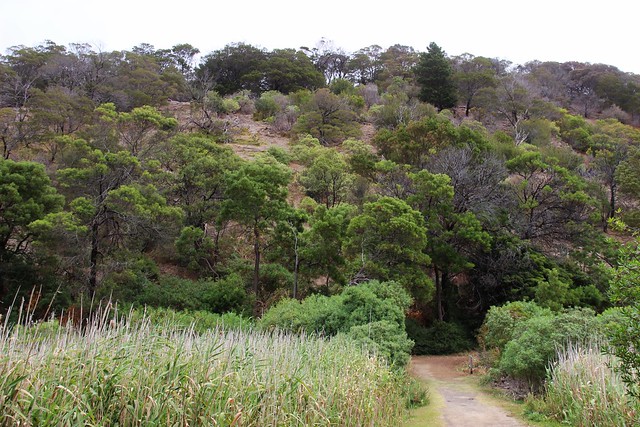 Tower Hill formed at least 30,000 years ago when lava from beneath the earth’s crust came into contact with the subterranean water table. The violent eruption that followed created the main funnel-shaped crater which later filled with water to form a lake up to 90 metres deep. Further volcanic activity within the centre of the crater formed the islands and cone-shaped hills that can be seen today.

Geelong has it’s own volcanic history – primarily, the You Yangs which resulted in the large volcanic plains in the surrounding countryside. Apparently, “when these volcanoes were active, probably between 2 and 3 million years ago, the You Yangs would have been granite islands in a sea of lava.” I recommend visiting the Museum Victoria website to learn more about the volcanic history of the Geelong region. Those unfamiliar with my blog may not know that I’ve been battling severe anxiety for most of my adult life. Volcanoes fascinate me and I love exploring the natural history of an area, but agoraphobia has severely limited what I’ve been able to do. I loved being able to explore here and see how it different from the You Yangs. 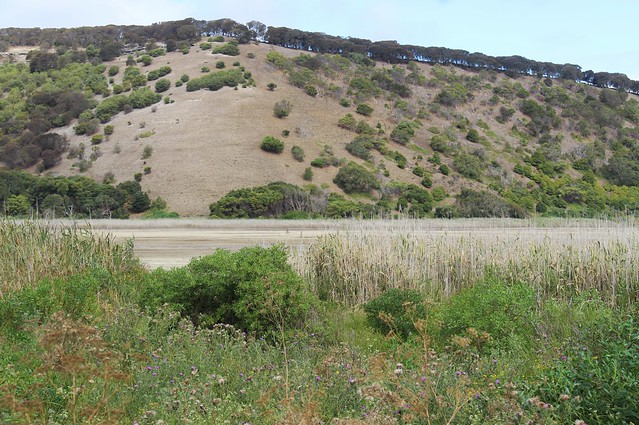 A sign described this walk as “where the wetlands meet forest”. As you can see in the above photo, there wasn’t much in terms of wetlands. This may have been due to it being the middle of summer – I know many of my local haunts are significantly drying. It may have been due to dry weather over a longer period. Regardless, a lot of the walk just looked like this: 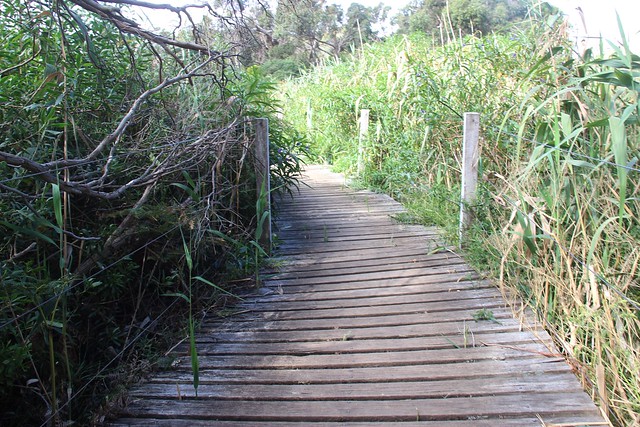 It may not have made for much of a pretty walk, but I still felt a spiritual connection to the place.

Others probably wont feel this. I went to the information center as soon as we got there and asked what the best walk was for bird watching. She recommended this and told the story about how she witnessed an eagle while driving recently, and that her community interpreted that as a soon sign. I may have paraphrased that wrong, but I really appreciated her sharing that with me.

I feel such a connection with nature and it can be quite upsetting to see the way so many Australians treat the environment. To talk to someone who had such a strong history with the area made me feel like I was among my type of people. I’d love to return here properly and doing some of the guided tours here.

The walk was actually quite disappointing in terms of birdlife – mostly silvereyes, grey fantails and fairy wrens, but it definitely made up for it with other wildlife! 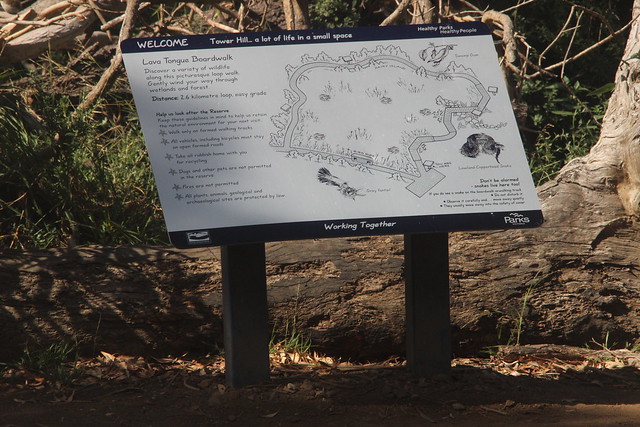 The boardwalk warned that snakes lived here and said that they ‘often moved away to the safety of cover’ when approached. I didn’t think much of this. There are snake warnings everywhere along the Barwon, in Geelong, and I’ve never seen one. Seconds later, I did see a light brown snake! I have no idea whether it was a lowland copperhead, as referenced on the sign, or possibly a brown snake as I only had my telephoto lens on at the time. I was transfixed.

It shows just how much I have changed since returning to nature. Previously, I would have been scared and felt on edge for the rest of the walk. Here, I was perfectly calm. It moved away at the same time that I saw it and hid in the bushes. I told my birdwatching friend about it later and he said that he had seen more, including a tiger snake. The area is meant to be pretty awesome for reptiles. One of the signs said that you can find southern grass skink, garden skink, tiger snake and white lipped snake. I got excited, thinking I saw a grass skink near the sign talking about them but it turned out to just be a southern water skink. Oh well! There is other fauna to be found in the area. In addition to koalas and kangaroos, the bark and hollows of trees are home to common bent wing and lesser long eared bats.

There is very little to say about the following photos other then they capture what it truly feels like to be inside the crater. I’m very keen to do the other walks to learn more about the geology of the place. I’m guessing it is similar to Blue Lake at Mount Gambier, in that the volcano collapsed. Unfortunately, this walk didn’t allow me to capture much of this. Perhaps the other ones do? 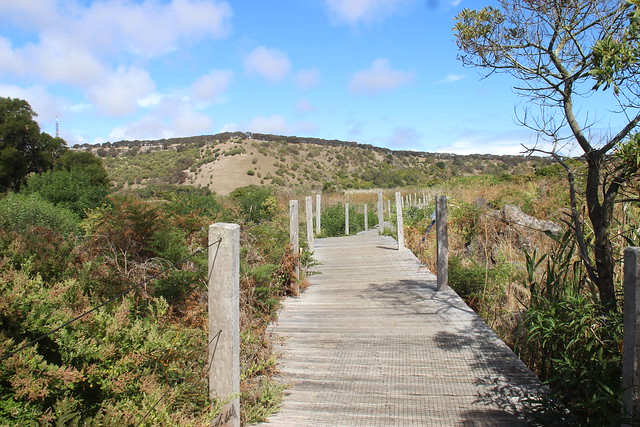 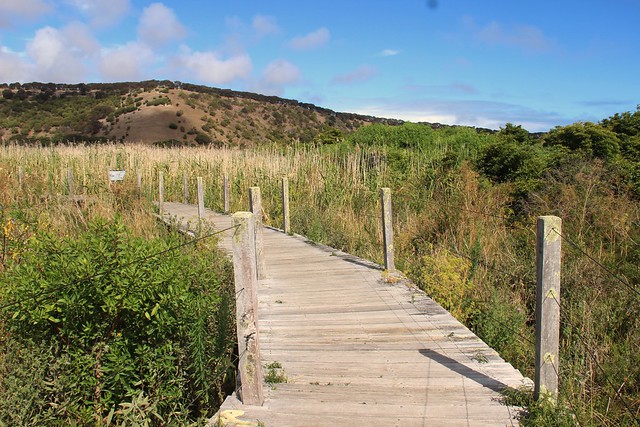 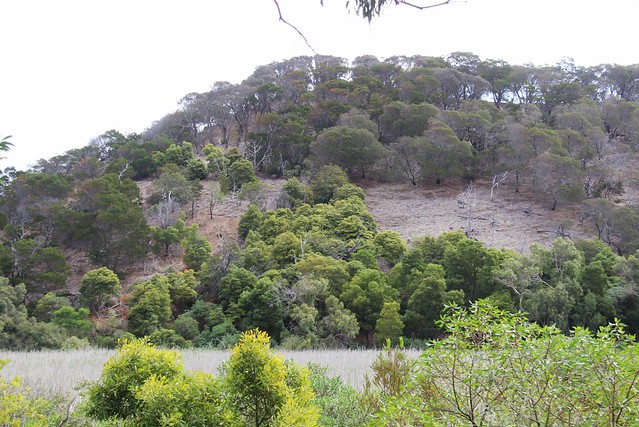 The flora was interesting, but very different to what I am used to

One I got past the wetland areas, the walk got a little bit interesting. I did notice that the trees and other plants were different to what I’m used to. 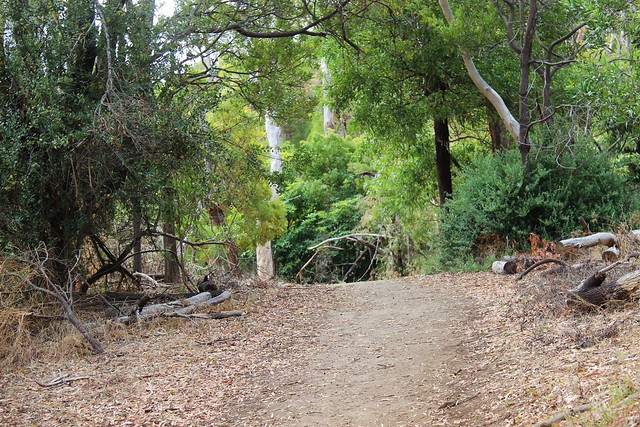 I’m not sure why this is, as Geelong is only 2 hours away from Warrnambool. I’m not even sure what type of environment I’m comparing it too. It just felt different. Maybe I was spoiled after exploring the Otways so much recently?

I was able to get some interesting photos of bark, although it didn’t stand out as much as others. 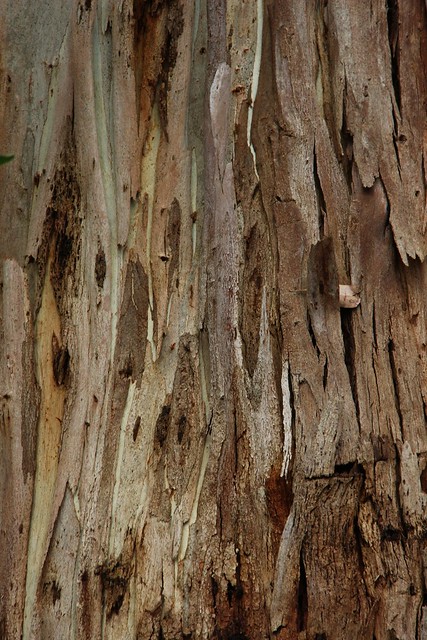 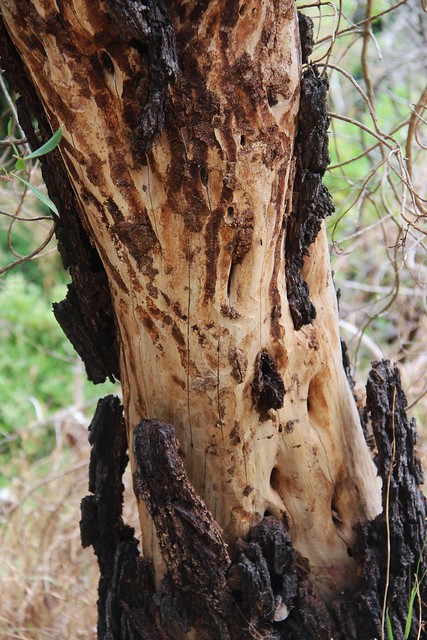 The walk was nearing an end. I may have been excited (big weekend – I needed sleep!) Then I saw this feathered fiend. 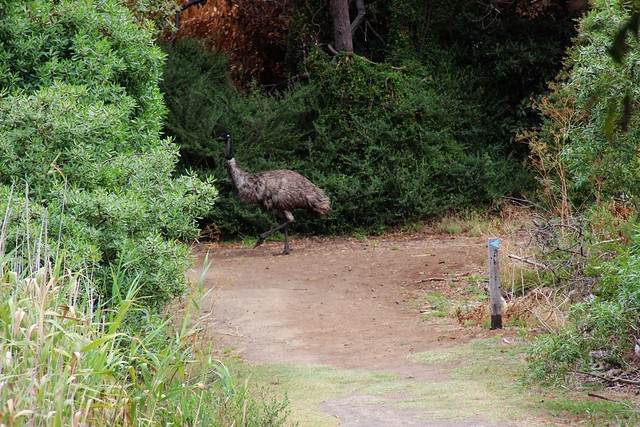 It wanted to walk in the direction I was going. I would have to walk past it to finish the walk and get to the car.

I walked to the left of the path. It ran towards me. Suddenly, it veered to the side and puffed its chest out. It did that funny run that emus do. Once it decided it was a sufficient distance away from me, it stopped. 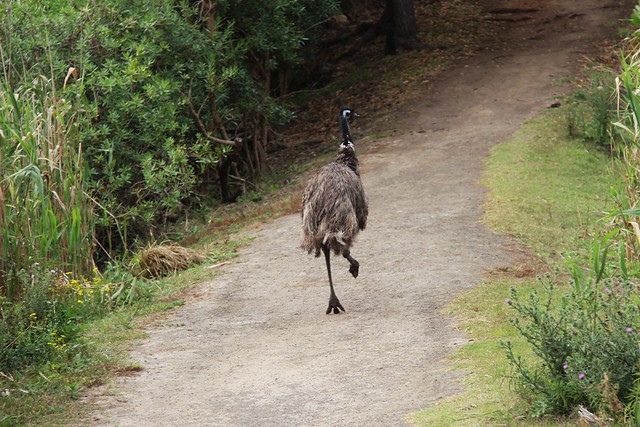 Damn. I’ve been around emus before but it is always a bit nerve wracking on a narrow pathway. Plus, I’m a suburban walker. I’m not used to this much wildlife!

I felt a strong connection to the area, but this walk may not be for everyone. I’d recommend reading the information brochure beforehand and choosing one that definitely aligns with your interests.