Recently, I went adventuring with Caroyln. (It may have been over 5 weeks ago but I’m not in the mood to do math.) We had explored Serendip and Lara Lakelands. We stopped at Limeburners Bay but the weather look like it was about to turn.

I did see an oystercatcher while we were in the car and made a mental note to return there ASAP.

Well, my brain didn’t have the mojo to return there until two days ago. In my defence there was Queensland, Apollo Bay, a bad cold and then a major back ouchie situation. Which makes for one very exhausted Jade.

It was a beautiful Wednesday afternoon where I farewelled Glenn and made the bus journey to the closest point to the beach. Thanks to the friendly and annoying signs, I learned that it was 1.1km away. This wasn’t even the entry point to the limeburners walk!

It didn’t matter though. As soon as I got there I was greeted by this: 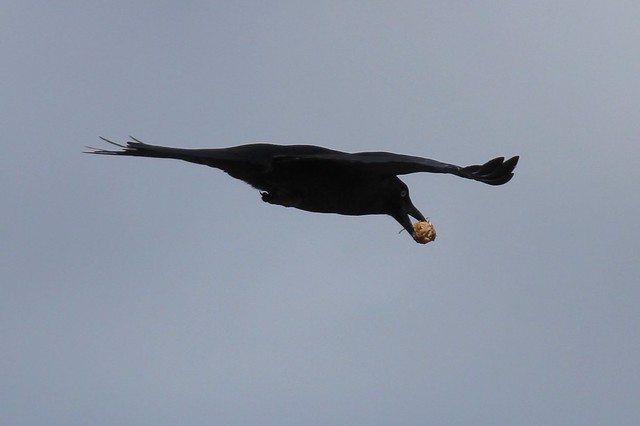 Almost immediately, this raven flew past. I’m not sure what is in its mouth, it looks like it could be something from fishing. Hope it is okay! 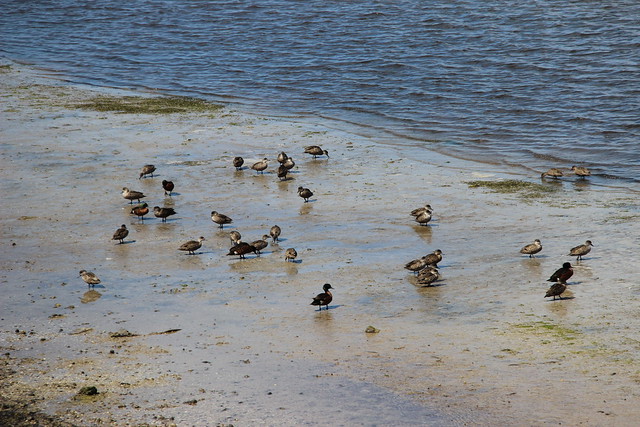 There were a lot of ducks at the beach. I’m assuming they are all chestnut teals but I can’t yet tell the difference between the two, except for the male chestnut. 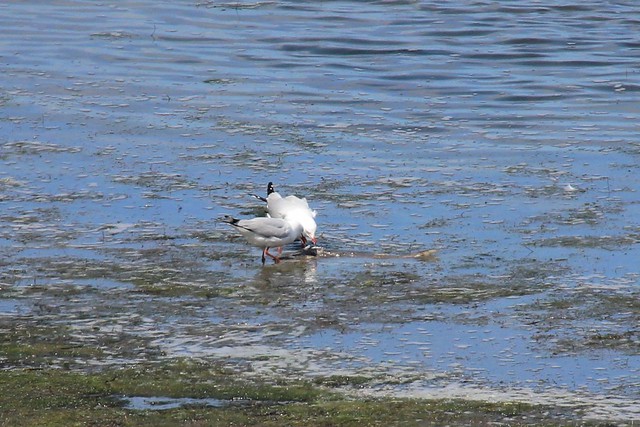 I looked at every white bird to double check to see whether any were terns. When I zoomed in, it looked like these two were eating an eel/fish. 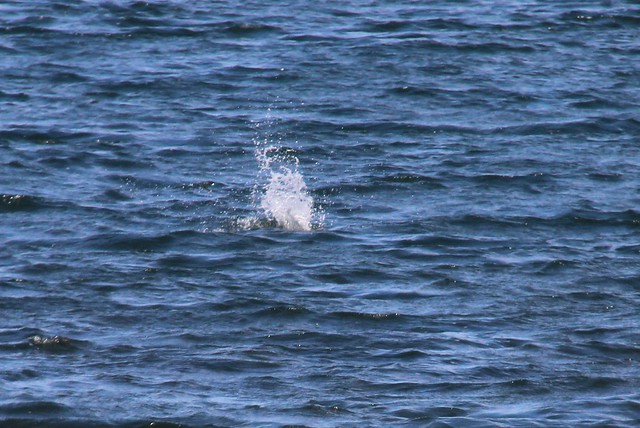 Fortunately there was a lot of tern action going on. (There was about three – they were only there for about 5 minutes.) It was one of those times where I loved the new lens. It was able to zoom in quickly and capture the scene – something the sigma could never do. 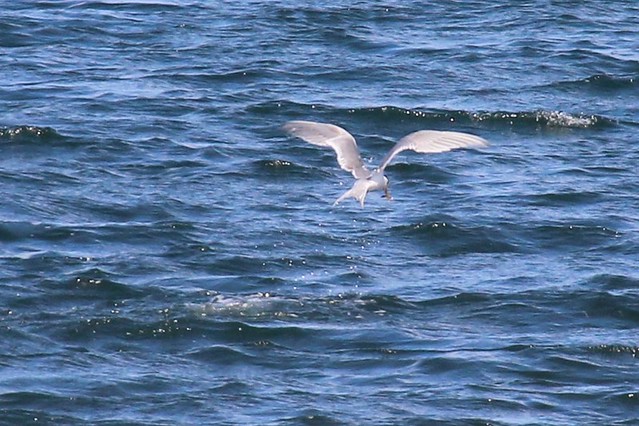 The detail in the photo isn’t the best, which is more the fault of user then the lens. I was so fortunate to capture this little fish! 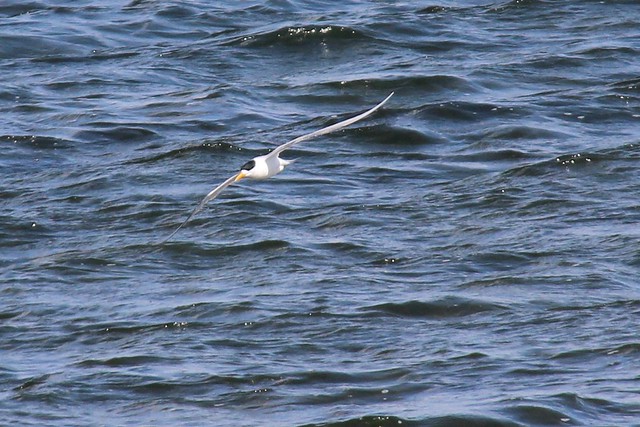 Shortly after, there was a group of three terns chasing each other. One had something in its mouth. 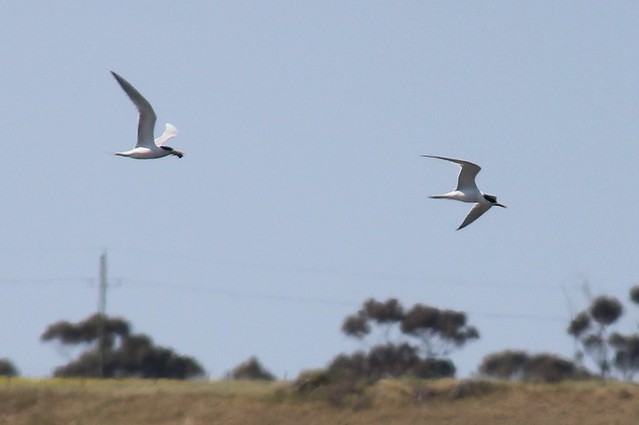 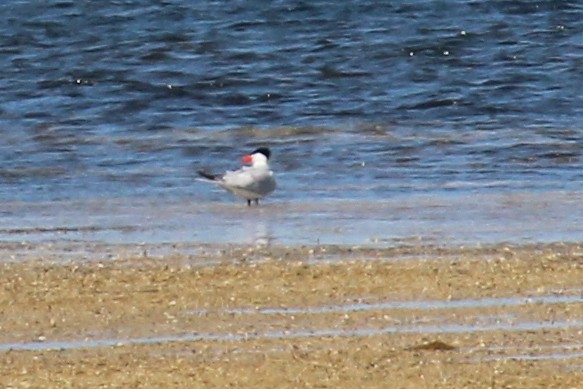 I also saw this tern. Judging by the beak colour and thickness, I am assuming caspian. Unrelated: gull billed terns are now on my bucket list. Terns are so confusing. I just want to knock them off the list so I can focus on photographing. 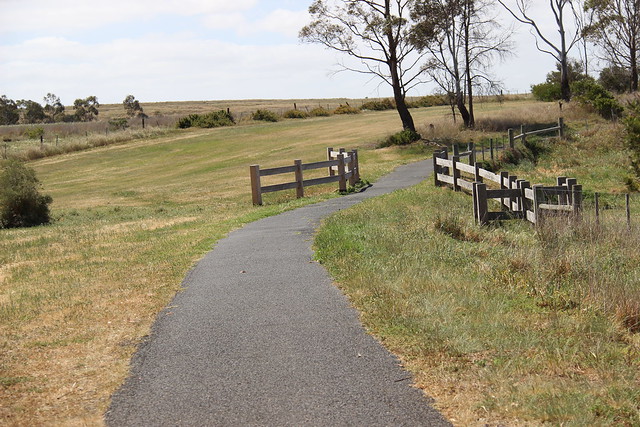 The above, and below, photos are to show what the path is like. It is a popular walking path and goes beyond limeburners lagoon and all the way to Lara. The path is well maintained. From what I recall, the birdlife is mostly interesting when the tide is out. I will have to visit many more times while I’m living in Corio to learn more about it. 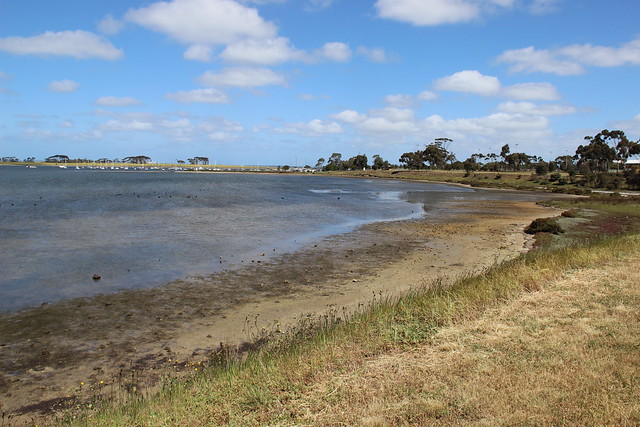 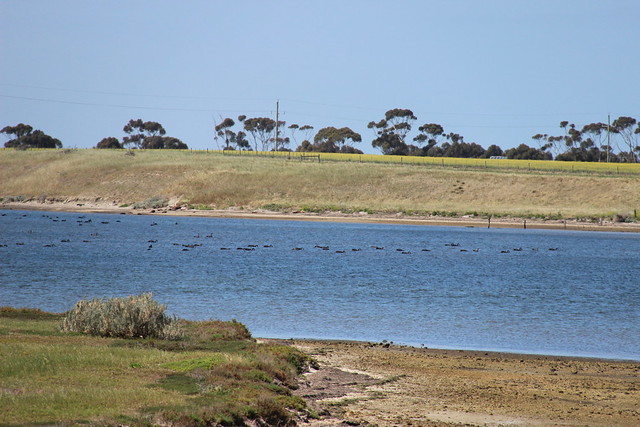 It was an incredibly popular area for swans – there were at least 50 here. Many were on the bay but some were on the shore, especially in areas where stormwater was running into the sea. No cygnets. 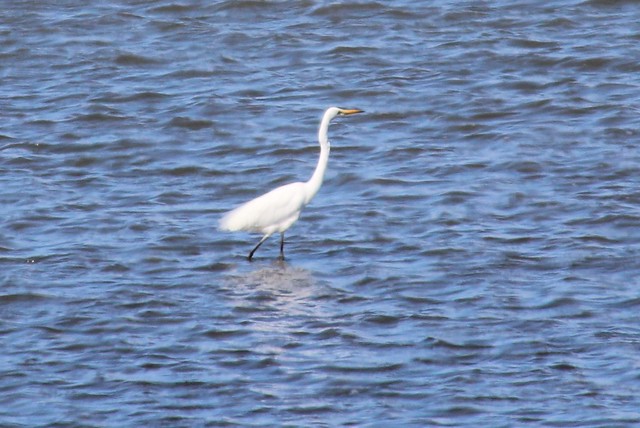 At least 3 egrets and 4 white necked herons, but no spoonbills which was a shame. 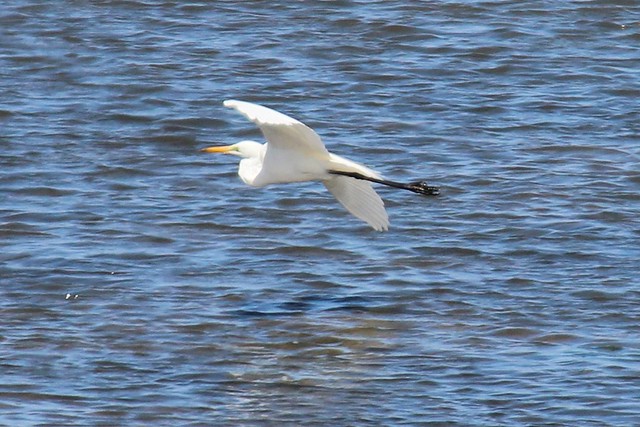 Apparently the black tip to the bill is a sign that the birds are young. I will definitely research that more. 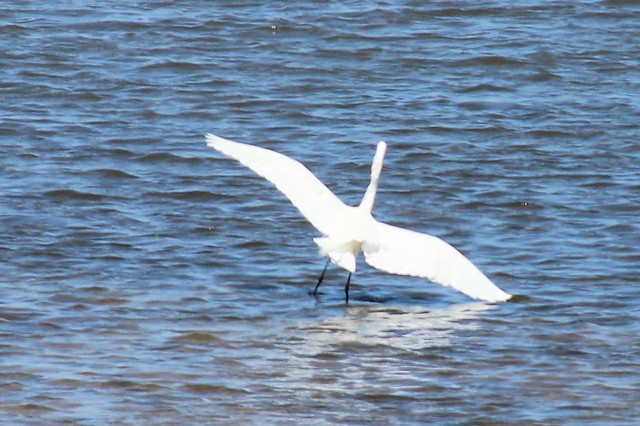 I thought this was funny; it landed on an angle. 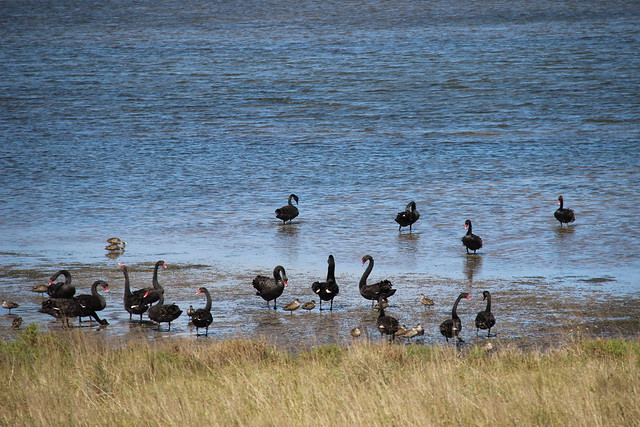 The swans and teals hanging out in the shallows. 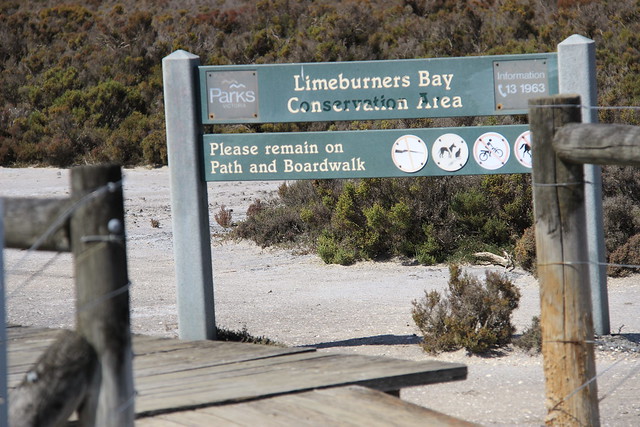 The boardwalk was different to what I remembered – I recall it actually having water, and there being birds fairly close to the boardwalk. This is a memory that is about 15 years old so naturally things have changed. I think this may be my new haunt. 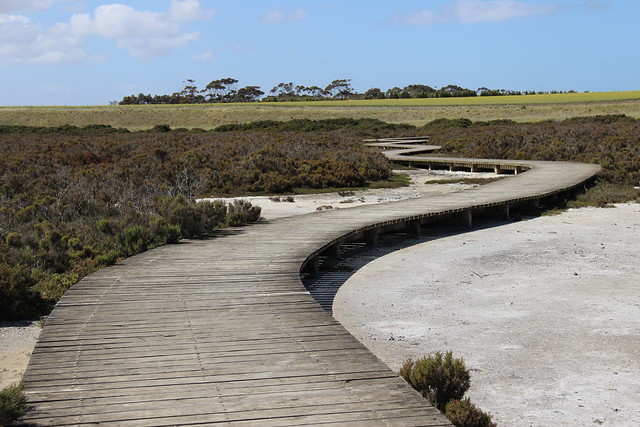 This shows just how much it has dried up. 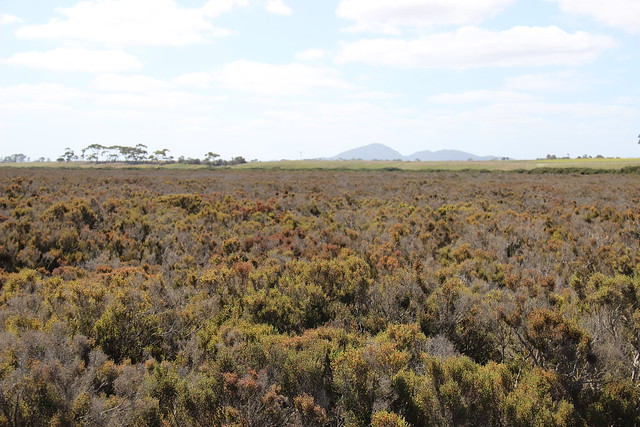 There is a lot of potential for nice landscapey shots. And, I know these bushes were hiding other birds. 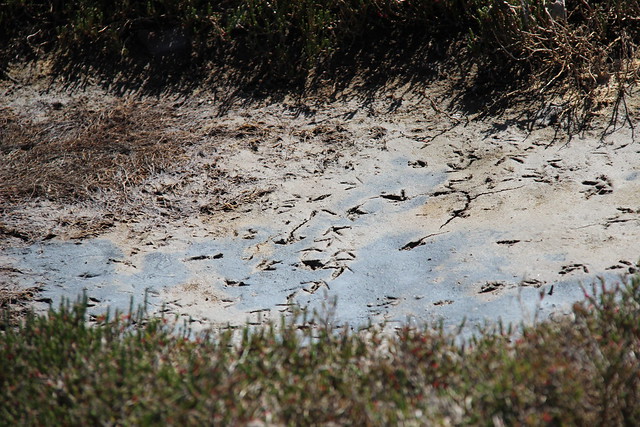 Footprints, showing that the ground is fairly soft. 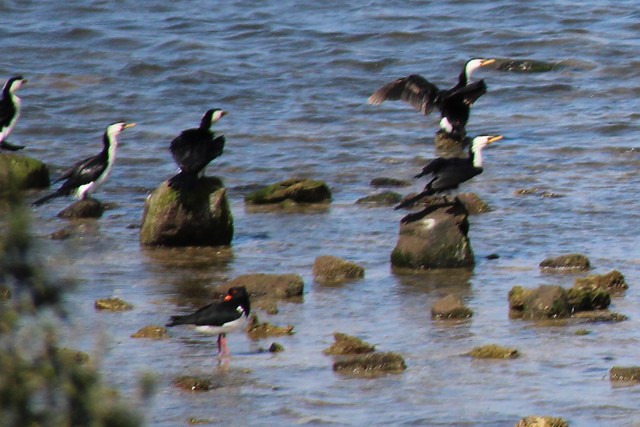 I was so disappointed on this trip as one of the reasons I returned was to get a photograph of an oystercatcher. I looked out for them specifically. Imagine my surprise when I saw this on the photo when I got home! Der! 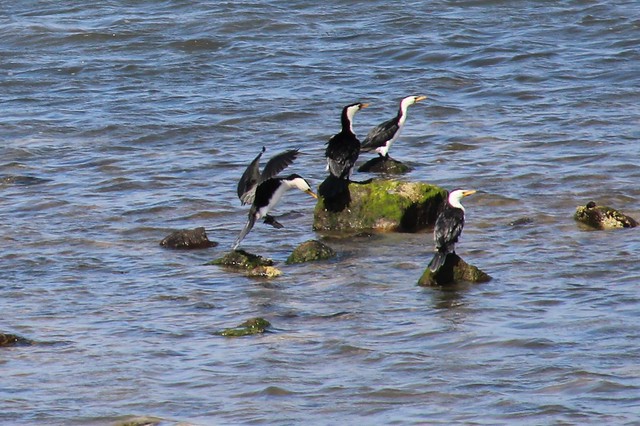 The cormorant photos are cliche but yes, I was secretly hoping to get a photo of one pooping. I’m weird. 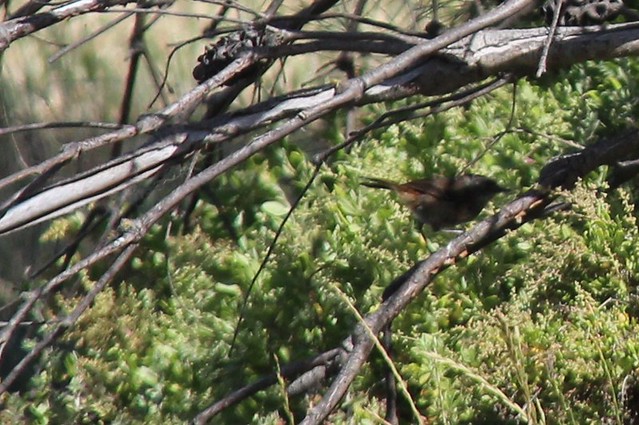 I’m unsure of what this bird is. The reddish rump is throwing me off, plus the tail is shorter then what I assume a grey fantail tail would be. That is what the face was making me think of.

I hate having to ask on the bird identification group as the answer is usually something obvious. And it feels like I’m always asking for help. (In my defense, so many variables!) 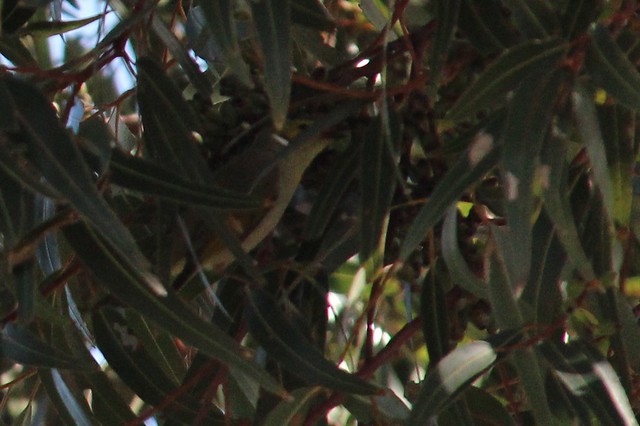 I took this photo as I saw something flitting about in the trees. I got home and realized: I haven’t seen a white plumed honeyeater in ages. I just don’t get them in Corio. It’s all sparrows, mynas and blackbirds. I should start recording local birds more often, will make that my next priority.

Was a thoroughly enjoyable twitch with a lot of potential for photography 🙂 Corio may be able to compete with Highton in the bird stakes after all.