It was our final day in Tasmania. I’d promised Seth that we would go for a wander at Waterworks Reserve to look for mammals. It had been an exhausting mini break. I’d had two migraines out of four days and had spent a massive day exploring the area around Eaglehawk neck on the Tasman Peninsula.

This culminated in Seth and I arriving at the reserve 2 hours before dusk, without a map or much idea of how to get around. Suffice to say, I quickly got us lost. 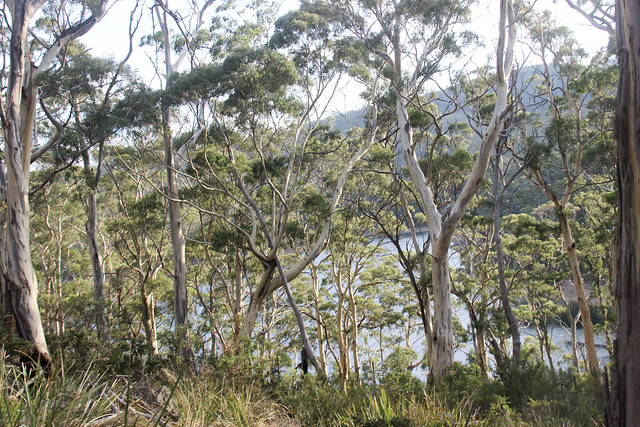 Dad had typed in the name of the reserve on the GPS, so we were dropped off at the closest car park. I’m now thinking that this wasn’t the main one as there were no signs or information anywhere. I knew it went in a rough loop so turned right at the nearest fire trail.

Quickly, we saw the magnificent view of the reservoir in between the trees. I knew from online and the book that the walk went around the water areas so assumed we were on the right path. 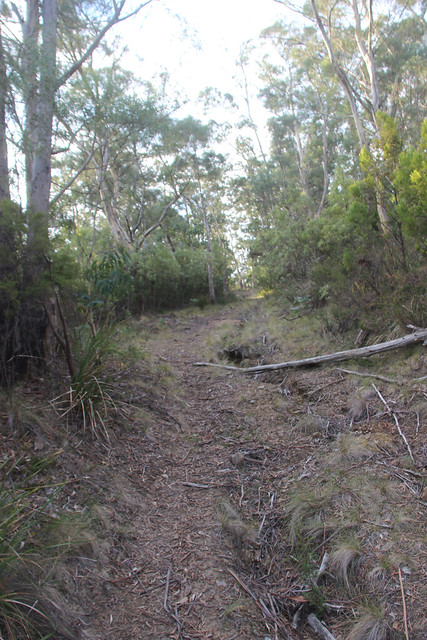 At first the walk was nice. Wide paths and beautiful views from below. 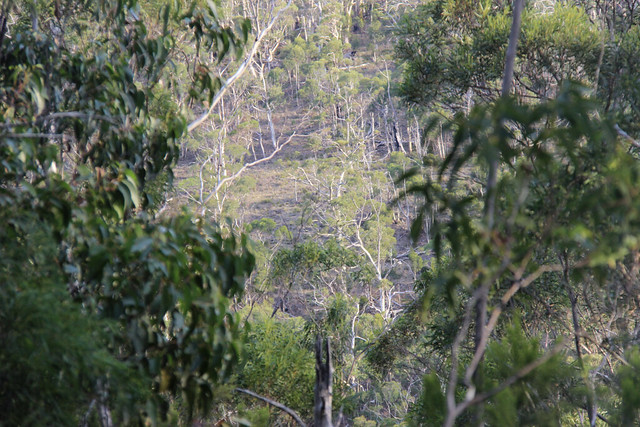 I knew we had made a mistake when we got to the really steep bit, pictured below. There were 2-3 sections like this, really close together. The path was borderline there, there were trees fallen over it and one wrong move could have led to a busted ankle. It was proper bush bashing, not the piddly walks I’ve done in the past.

Surprisingly, I held up okay. I struggled with breathing at multiple points (probably because I rushed the uphill bits to get away from them.) My legs ached. I didn’t get physically sick otherwise, like I normally have over the past couple of years. 😀 This is awesome. It means I can start doing proper hiking again! 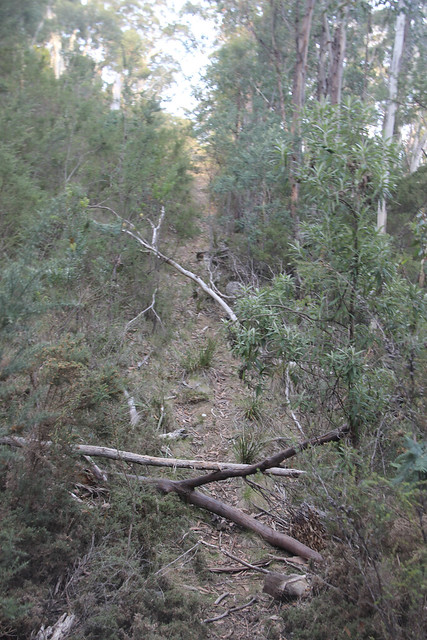 We had done a couple of steep up and down sections when I realized that there had been no signage. This wouldn’t have been part of the official walk and we could have ended up anywhere… in an area I’ve never visited before! I called mum to say we may be slightly later then planned and started retracing our steps. 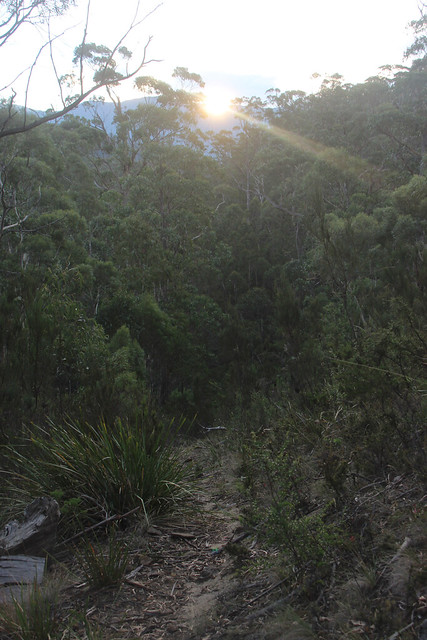 The sun was starting to set, which led to some beautiful views of Mount Wellington. Alas, we didn’t have much luck seeing any mammals. 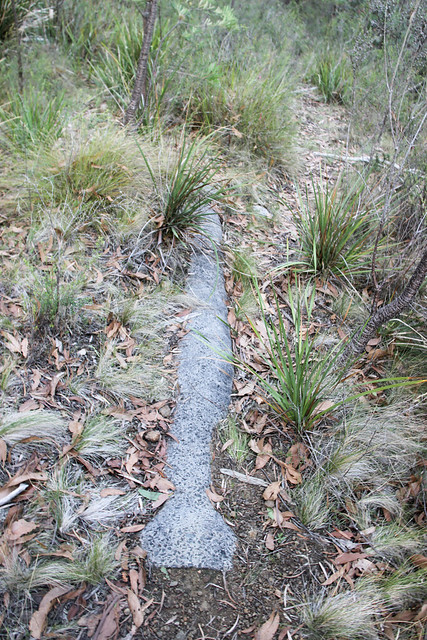 At one junction, I opted for the walk downhill thinking that it was our return path. Seth pointed out that we hadn’t seen the pipeline before and had to retrace our steps – again! – which meant more uphill walking. 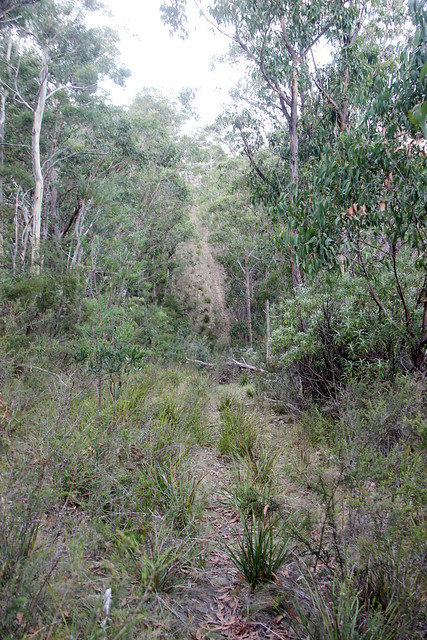 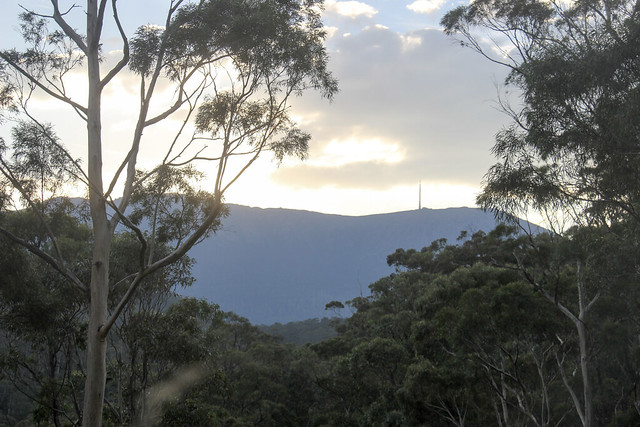 I could see Mount Wellington in the distance, which made my heart ache. I could easily live in Tasmania. I’m so keen to explore the bush here. While we were walking, my parents drove to the top of the summit. 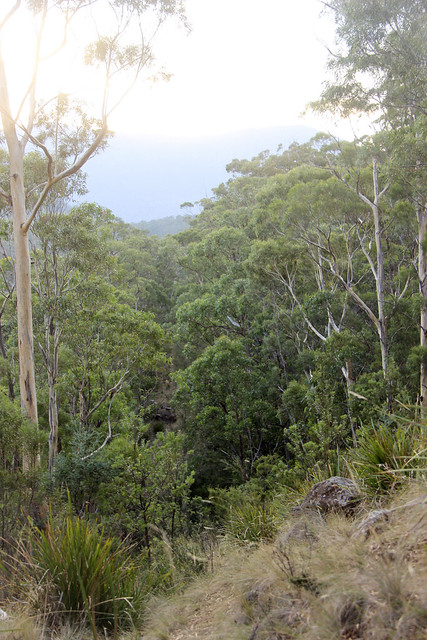 Despite getting lost and being rushed, it was a great little walk. I’m keen to return here and do it properly, as well as walking the Pipeline Track to Fern Tree. We didn’t have much luck with the mammals, although we think we saw a pademelon on the drive to Fern Tree Tavern for dinner. (Note: They have the best garlic loaf. That one meal was a trip highlight.)

I hadn’t had much luck finding the endemic birds on the trip. Seth had picked up some of the easier lifers, such as the green rosella and Tasmanian Native Hen. We’d explored a couple of bush environments with the intention of tracking down some birds but I kept on dipping. Frankly, it was because I was trying to cram so much into 4 days and couldn’t give a region the attention it deserved.

I chanced upon this yellow throated honeyeater. The photos are mediocre but it was revitalizing to see a bird I wouldn’t normally see. 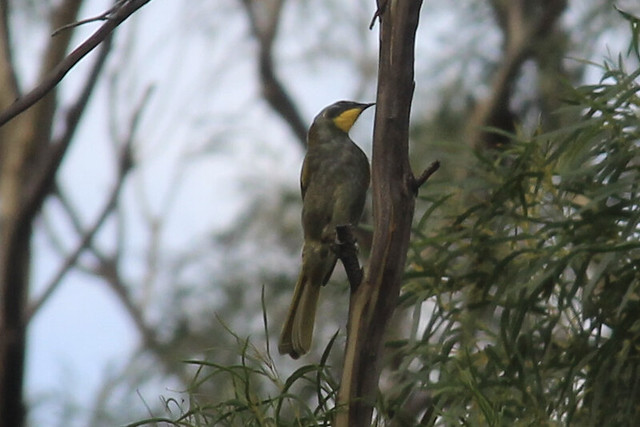 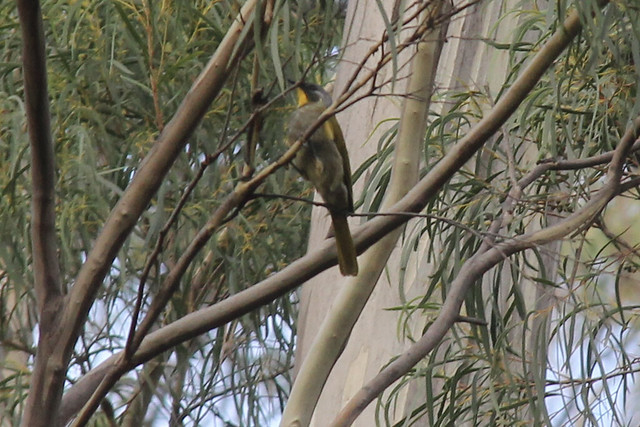 We had decent luck with invertebrates. We also found a couple of skinks in one area but didn’t have the time to look properly. It would have been awesome to have properly looked for skinks in warmer weather, though I’d assume snakes would LOVE the reserve. 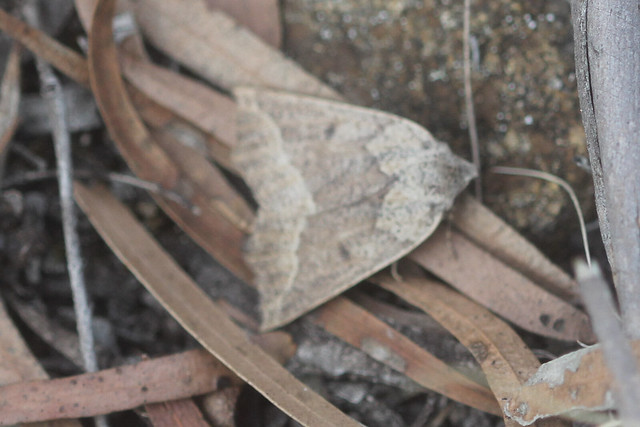 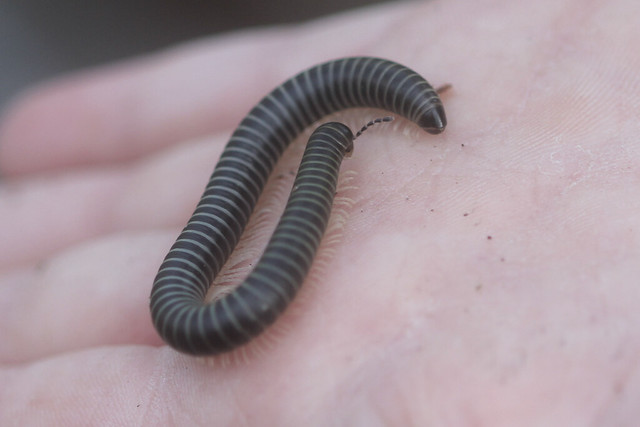 This millipede has been narrowed down to the Amastigogonus genus. According to Bowerbird, “this is either Amastigogonus hardyi (last collected at Ridgeway in 1948) or A. verreauxii (first collected in that area by visiting French botanist Jules Verreaux ca 1843).”

It always gets me excited knowing that something Sethy may have found (that kid spots everything!) may contribute to science 🙂 The Bowerbird expert (Bob Mesibov) also said:

“When you disturb or upset millipedes in this group, they secrete an acrid-smelling, yellow chemical from pores along the sides. The chemical is a mix of benzoquinones and will stain your skin, the stain turning from yellow to purple over about half an hour. This staining is harmless but a bit alarming the first time. The chemicals are meant to be a defense against predators.”

Can’t wait to tell Seth that. Although it does mean we should probably do more research before picking up millipedes. Further research shows that Bob wrote a book about Tasmanian centipedes in 1986. 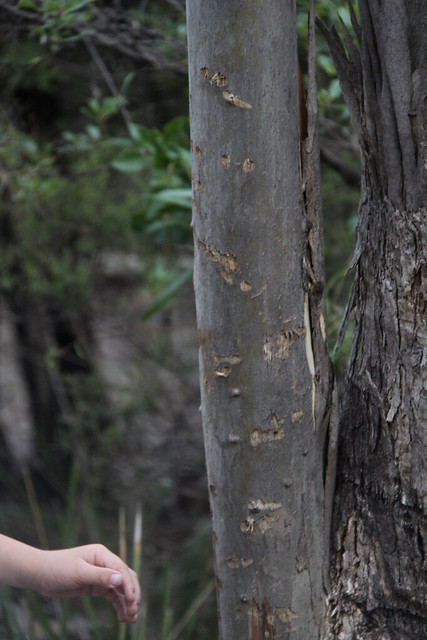 We didn’t have any luck seeing mammals but tried to keep an eye out of any sign of animal life. We did see these scratches that went up the tree, almost as tell as Seth. (1.2m). I made the assumption that they were pademelon but could be anything.

There was interesting plant life on this track. About 1/4 in I stopped photographing anything too close to the ground as I was struggling to breath. Here are the ones that have caught my attention, although I don’t know where to begin with the process of identification. 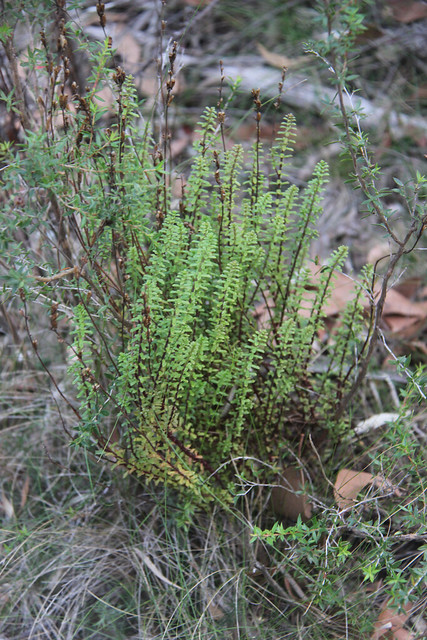 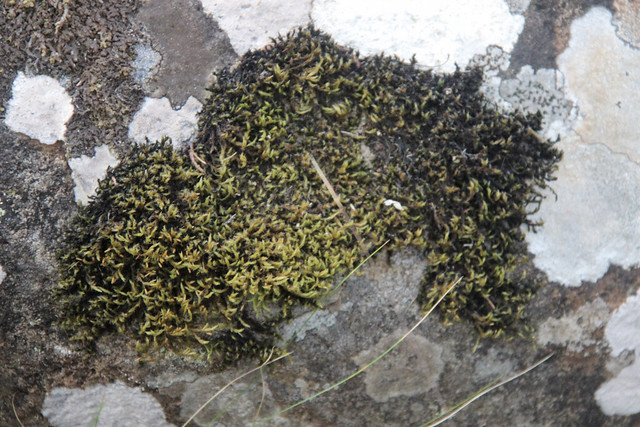 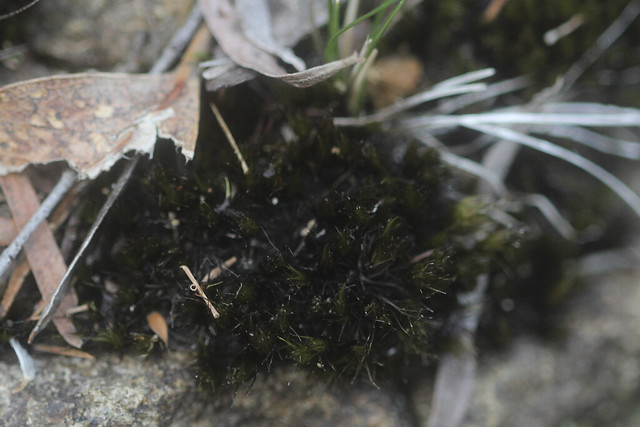 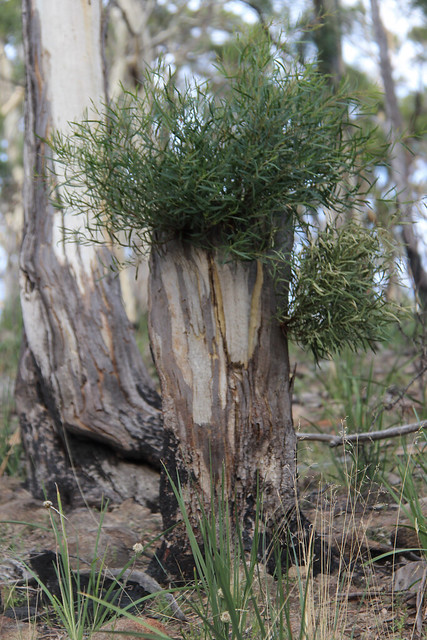